Next generation, in this case, is defined as experiments that will be at least 10 times as sensitive as the current crop of dark matter detectors. 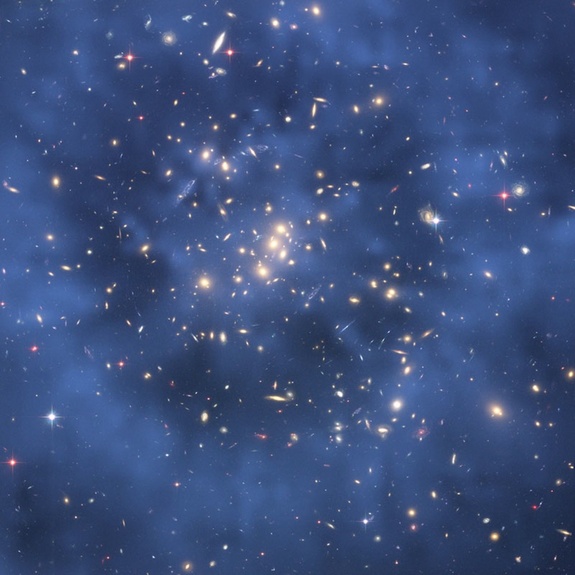 This Hubble Space Telescope composite image shows a ghostly ring of dark matter in the galaxy cluster Cl 0024+17. The ring is thought to have been formed long ago during a titanic collision between two massive galaxy clusters. The ring’s discovery is among the strongest evidence yet that dark matter exists. Image via NASA, ESA, M.J. Jee and H. Ford (Johns Hopkins University) and Space.com. Read more about this image.

Late last week (July 11, 2014), the U.S. Department of Energy’s Office of High Energy Physics and National Science Foundation’s Physics Division jointly announced their support for experiments in the next generation of the search for dark matter. Next generation, in this case, is defined as experiments that will be at least 10 times as sensitive as the current crop of dark matter detectors. DOE and NSF say they will back the Super Cryogenic Dark Matter Search-SNOLAB (SuperCDMS); the LUX-Zeplin experiment (LZ); and the next iteration of the Axion Dark Matter eXperiment (ADMX-Gen2). Follow the links below to learn more:

How will SuperCDMS and LZ try to detect dark matter?

How will ADMX-Gen2 try to detect dark matter?

Overall, dark energy is thought to contribute 73 percent of all the mass and energy in the universe. Another 23 percent is dark matter, which leaves only 4 percent of the universe composed of regular matter, such as stars, planets and people. Pie chart via NASA

What is dark matter? Beginning in the 20th century, studies of distant galaxies suggested that much of the matter in our universe exists in the form of an unseen dark matter. Fritz Zwicky suggested the idea in 1933 to account for the rate at which galaxies in clusters move with respect to each other. Astronomers began speaking of the missing mass program. In the 1960s-1970s, Vera Rubin and and colleagues observed the speeds with which galaxies themselves rotate. Even on the scale of individual galaxies, astronomers found they needed to refer to an unseen dark matter.

Scientists now believe that 23 percent of the mass of the universe comes in the form of dark matter. This material, whatever it is, does not emit light or energy, and so it cannot be seen directly.

No one has yet detected dark matter, but scientists have gotten much more refined in their thinking about it in recent years. Thus it’s possible its detection will come soon, especially as these new detectors come online. 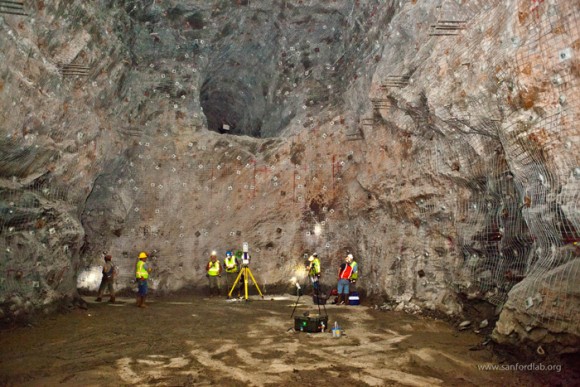 The LUX-ZEPLIN dark-matter search will be located deep underground in a goldmine in South Dakota. The LZ collaboration consists of 128 scientists and engineers from 29 institutions in the U.S., U.K, Portugal, and Russia. Image via Matthew Kapust/Sanord Underground Research Facility. 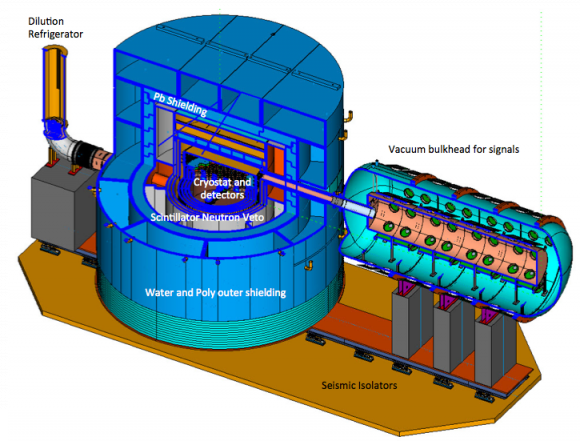 The next-generation Super Cryogenic Dark Matter Search-SNOLAB – aka SuperCDMS – will operate in the deepest underground laboratory in North America, SNOLAB, located 2 kilometers (1.6 miles) below the surface in the Vale Creighton Mine near Sudbury, Ontario, Canada.

How will SuperCDMS and LZ try to detect dark matter? Both LZ and SuperCDMS will look for hypoethetical dark matter particles called WIMPs, or weakly interacting massive particles. WIMPs are not known for certain to exist. They are a product of theories about the early universe. But, although they are theoretical, their properties can be studied and defined.

LZ is capable of identifying WIMPs with a wide range of masses, including those much heavier than any particle the Large Hadron Collider at CERN could produce. SuperCDMS will specialize in looking for light WIMPs with masses lower than 10 GeV. (And of course both LZ and SuperCDMS are willing to stretch their boundaries a bit if called upon to double-check one another’s results.)

However, said LZ spokesperson Harry Nelson of the University of California, Santa Barbara:

… if you detect just one kind of signal, light or sound, you can be fooled. A number of things can fake it.

To stay shielded from the best known fakers – cosmic rays – SuperCDMS and LZ will be located underground—SuperCDMS at SNOLAB in Ontario, Canada, and LZ at the Sanford Underground Research Facility in South Dakota. Even there, they will still need to deal with natural radiation from the decay of uranium and thorium in the rock around them: SuperCDMS spokesperson Blas Cabrera of Stanford University told Symmetry:

One member of the decay chain, lead-210, has a half-life of 22 years. It’s a little hard to wait that one out.

To combat this, both experiments collect a second signal, in addition to light or sound—charge. The ratio of the two signals lets them know whether the light or sound came from a dark matter particle or something else. 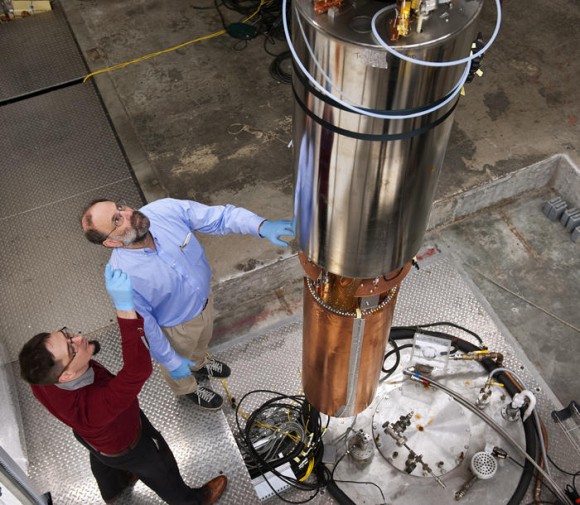 University of Washington physicists Leslie Rosenberg (right) and Gray Rybka examine the experiment package as it is positioned above the bore of a large superconducting magnet, two primary components of the detector being used in the Axion Dark Matter Experiment. The axion was first conjectured by physicists in the late 1970s as a solution to a problem in a theory called quantum chromodynamics. Little is known for sure about the axion. It appears to react gravitationally to matter, but otherwise it seems to have no other interaction. Since the 1930s, scientists have believed there must be some unseen but massive substance, a sort of gravitational glue, that prevents rotating galaxies from spinning apart. Axions, if they in fact do exist, are candidates for the makeup of cold dark matter. Image via Mary Levin / University of Washington

How will ADMX-Gen2 try to detect dark matter? With ADMX-Gen2, scientists won’t be looking for WIMPs. They’ll be looking for a different kind of hypothetical elementary particle called an axion, first postulated in 1977.

ADMX-Gen2 will look for axions in the following way. If an axion passed through a magnetic field, it could convert into a photon. The ADMX team encourages this transformation by placing their detector within a strong magnetic field. Then they attempt to detect the change. ADMX-Gen2 co-spokesperson Gray Rybka of the University of Washington in Seattle told Symmetry:

That is, the the ADMX detector slowly turns the dial, tuning itself to watch for one axion mass at a time. In its existing form, this detector would take around 100 years for the experiment to get through all of the possible channels. But with the addition of a super-cooling refrigerator, the next generation detector – ADMX-Gen2 – will be able to search all of its current channels, plus many more, in the span of just three years.

With SuperCDMS, LZ and ADMX-Gen2 in the works, physicists say, the next several years of the dark matter search could be some of its most interesting.

Bottom line: Three projects have been chosen by DOE and NSF as the next generation of dark matter seekers. Next generation, in this case, is defined as experiments that will be at least 10 times as sensitive as the current crop of dark matter detectors. DOE and NSF say they will back the the LUX-Zeplin experiment (LZ); and the next iteration of the Axion Dark Matter eXperiment (ADMX-Gen2).