This image shows an Einstein Ring

The ring is caused by a near-perfect alignment of two galaxies with respect to Earth. One galaxy is ‘lensing’ the other galaxy’s light. 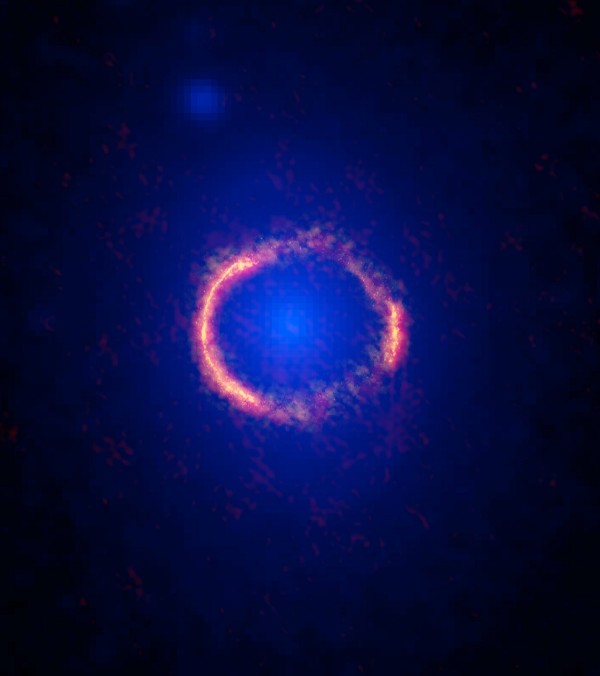 View larger. | Composite image of a gravitationally lensed galaxy known to astronomers as SDP.81. The bright orange central region of the ring reveals the glowing dust in this distant galaxy. The surrounding lower-resolution portions of the ring trace the millimeter wavelength light emitted by carbon monoxide molecules. The diffuse blue element at the center of the ring is from the intervening lensing galaxy. Composite created via images from ALMA and the Hubble Space Telescope. Image via NRAO/ESO/NAOJ; B. Saxton NRAO/AUI/NSF; NASA/ESA Hubble, T. Hunter (NRAO).

According to Einstein’s theory of general relativity, if one galaxy is located directly behind another, the intervening galaxy should bend the light of the more distant one, in such a way that we on Earth will see a ring in space. Less than 100 years ago, scientists believed we’d never see these Einstein Rings. The alignment would never be so perfect, they thought, and, even if such perfect alignments did exist, our instruments wouldn’t be powerful enough to let us perceive the ring. But space has proven to be vaster than scientists knew, so of course some galaxies are directly behind others, as seen from Earth. And, beginning in 1988, a few Einstein rings – some only partial rings, caused by a slightly off-center alignment – began to be found. Here is a beautiful example of a recently discovered Einstein Ring, made possible by the highest resolution images ever taken with the Atacama Large Millimeter/submillimeter Array (ALMA) in Chile.

In this particular case, the galaxy known as SDP.81 and an intervening galaxy line up so perfectly that the light from the more distant one forms a nearly complete circle as seen from Earth.

The more distant galaxy is known to astronomers as SDP.81. It’s an active star-forming galaxy nearly 12 billion light-years away, seen at a time when the universe was only 15 percent of its current age.

The light from SDP.81 is being lensed, or bent, by a massive foreground galaxy that is a comparatively nearby at 4 billion light-years away. It’s the familiar concept of gravitational lensing you may already know about … but done perfectly, in this case, so that we see a ring.

Astronomers acquired the new SDP.81 images in October 2014 as part of ALMA’s Long Baseline Campaign, a program to test and verify the telescope’s highest resolving power, achieved when ALMA’s antennas are at their greatest separation: up to about 9 miles (15 km) apart. The National Radio Astronomy Observatory, which operates the ALMA telescope, said in a statement on April 7, 2015:

The highest resolution image of SDP.81 was made by observing the relatively bright light emitted by cosmic dust in the distant galaxy. This striking image reveals well-defined arcs in a pattern that hints at a more complete, nearly contiguous ring structure. Other slightly lower-resolution images, made by observing the faint molecular signatures of carbon monoxide and water, help complete the picture and provide important details about this distant galaxy.

Though this intriguing interplay of gravity and light in SDP.81 has been studied previously by other observatories, including radio observations with the Submillimeter Array and the Plateau de Bure Interferometer, and visible light observations with the Hubble Space Telescope, none has captured the remarkable details of the ring structure revealed by ALMA.

Papers describing these publicly available data and the overall outcome of the ALMA Long Baseline Campaign are to be published in the Astrophysical Journal, Letters. 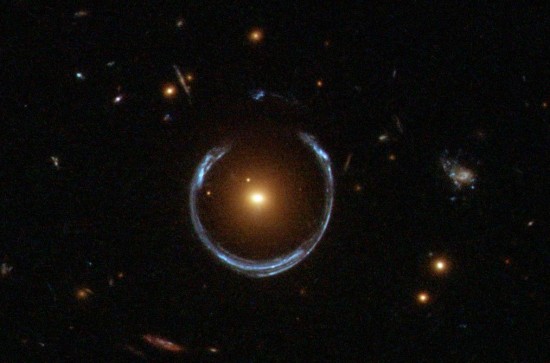 Here’s another Einstein Ring. This one is only partial, so you know the two galaxies were not aligned as perfectly with Earth. The light of the background galaxy is distorted into a horseshoe shape. Read more about this image.

Bottom line: If two galaxies are perfectly lined up in space with respect to Earth, the light of the intervening galaxy will distort the light of the more distant one, and we on Earth will see a ring in space. A new image from the ALMA telescope in Chile shows a nearly perfect Einstein Ring.