This date in science: Definitive discovery of Neptune’s rings

Posted by EarthSky and Elizabeth Howell in Space | August 22, 2014

A few days before the NASA spacecraft Voyager 2 skimmed by Neptune in 1989, it acquired images of a faint, continuous ring system encircling the planet.

August 22, 1989. NASA’s Voyager 2 spacecraft swept past the planet Neptune on August 25, 1989. A few days before that encounter, as Neptune began looming large in Voyager’s cameras, the spacecraft discovered a faint but continuous ring system encircling the planet. Scientists had suspected there were rings around Neptune some years earlier. After all, Uranus had rings, discovered in 1977. And, watching from Earth in 1984, astronomers were able to see extra blinks before and after Neptune passed in front of a distant star. Still, Voyager 2 made the definitive discovery of Neptune’s rings a few days before it swept closest to the planet. 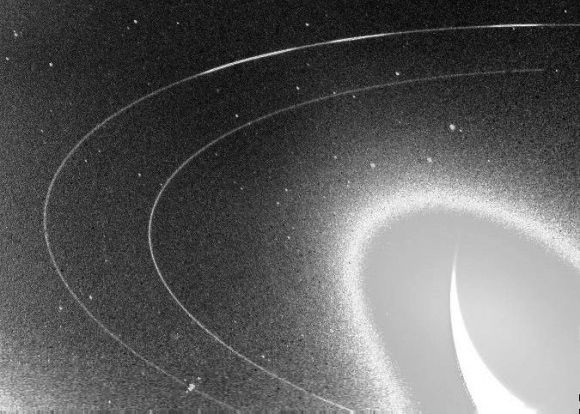 Neptune has a faint, continuous ring system. This Voyager 2 image is shown at increased brightness, to bring out fainter features.

Today, Voyager 2 remains the only earthly spacecraft to have encountered Neptune. Since Voyager’s fly-by, however, the Hubble Space Telescope and Earth-based telescopes have been able to acquire images of the two brightest rings of Neptune. Those two rings are called Adams and Le Verrier, for John Couch Adams and Urbain Jean Joseph Le Verrier, whose independent calculations led to a position for Neptune on the sky’s dome and hence to its discovery in 1846.

The fainter rings of Neptune are still far below the threshold for visibility from Earth’s vicinity.

The outermost ring, Adams, contains three prominent arcs now named Liberty, Equality and Fraternity. The existence of arcs is hard to understand because the laws of motion would predict that arcs spread out into a uniform ring over very short timescales. The gravitational effects of Galatea, a moon just inward from the ring, are now believed to confine the arcs.

Bottom line: On August 22, 1989, while still a few days out from its closest approach to Neptune, the Voyager 2 spacecraft made the definitive discovery of rings for this outer planet.

In August 2014, a new map from Voyager’s 1989 flyby of Neptune gives us a glimpse of an unseen world