On February 5, 1963, Maarten Schmidt unraveled the mystery of quasars and pushed back the edges of the known cosmos. His insight into quasars – the most distant and luminous objects known – has changed the way scientists view the universe. 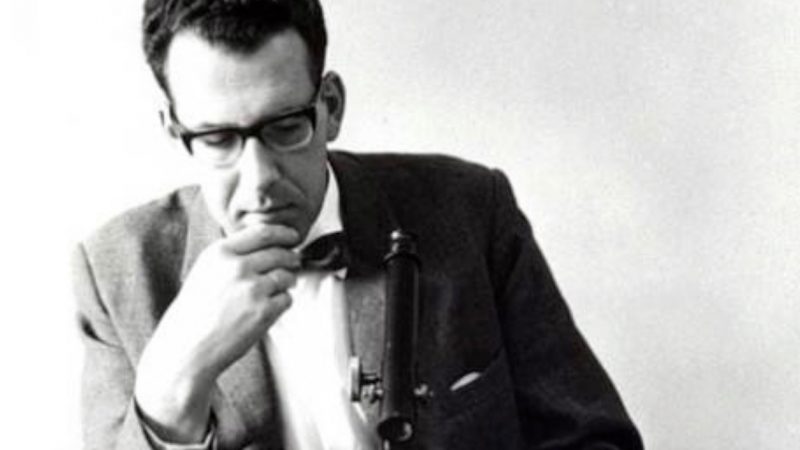 Today in science: On February 5, 1963, Dutch astronomer and Caltech professor Maarten Schmidt had a eureka moment when studying a quasi-stellar radio source, or quasar, that had profound implications for how scientists would view the universe. Schmidt was studying a quasar known as 3C273 that was starlike in appearance with the addition of a mysterious jet. But even stranger was its spectrum. Astronomers examine the spectrum, or range of wavelengths of light, that a star emits in order to decipher the object’s composition. But the emission lines of 3C273’s spectrum didn’t match any known chemical elements. Schmidt had a sudden realization that 3C273 contained the very ordinary element hydrogen. It was just tricky to identify because the spectral lines of hydrogen didn’t appear where expected; instead they were highly shifted toward the red end of the spectrum. Such a large redshift could occur if 3C273 were very distant, about 3 billion light-years away.

Dr. Schmidt recalled the excitement of his revelation to EarthSky. He said:

This realization came immediately: my wife still remembers that I was pacing up and down much of the evening.

The implications were just this: For the quasar to be so far away and still visible, 3C273 must be intrinsically very bright and very powerful. It’s now thought to shine with the light of two trillion stars like our sun. That’s hundreds of times the light of our entire Milky Way galaxy. Yet 3C273 appears to be less than a light-year across, in contrast to 100,000 light-years for our Milky Way.

The quasar 3C273 is not only distant. It is also exceedingly luminous, implying powerful energy-producing processes unknown in 1963. Schmidt announced his revelation about quasars in the journal Nature on March 16, 1963.

Maarten Schmidt is a Dutch astronomer who, in 1963, recognized that quasars are located in the very distant universe, and therefore must be extremely powerful energy sources. 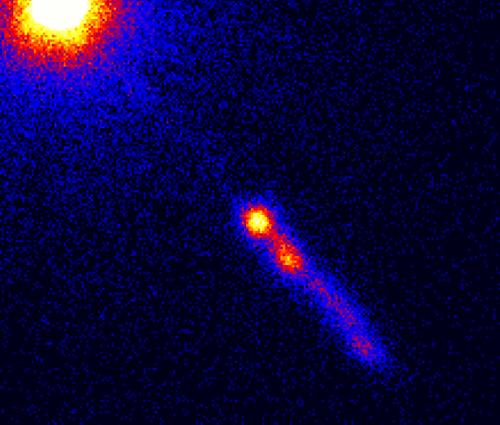 X-ray image of 3C273 and its jet. Today, this quasar is known to lie at the center of a giant elliptical galaxy. Image via Chandra X-ray Observatory.

Today, hundreds of thousands of quasars are known, and many are more distant and more powerful than 3C273. It’s no exaggeration to say they turned the science of astronomy on its ear. Why, for example, are these powerful quasars located so far away in space? Light travels at a finite speed (186,000 miles per second), and we only see quasars in distant space and therefore in the distant past. These strange objects only existed in the early universe and no longer exist in the present universe. Why?

In the 1960s, 3C273 and other quasars like it were strong evidence against Fred Hoyle’s Steady State theory, which suggested that matter is continuously being created as the universe expands, leading to a universe that is the same everywhere. The quasars showed the universe is not the same everywhere and thus helped usher in Big Bang cosmology.

But the Steady State theory had been losing ground even before 1963. The biggest change caused by Maarten Schmidt’s revelation about the quasar 3C273 was in the way we think about our universe.

In other words, the idea that 3C273 was extremely luminous, and yet occupied such a relatively small space, suggested powerful energies that astronomers had not contemplated before. 3C273 gave astronomers one of their first hints that we live in a universe of colossal explosive events – and extreme temperatures and luminosities – a place where mysterious black holes abound and play a major role.

According to a March 2013 email from Caltech:

In 1963, Schmidt’s discovery gave us an unprecedented look at how the universe behaved at a much younger period in its history, billions of years before the birth of the sun and its planets. Later, Schmidt, along with his colleague Donald Lynden-Bell, discovered that quasars are galaxies harboring supermassive black holes billions of light-years away, not stars in our own galaxy, as was once believed. His seminal work dramatically increased the scale of the observable universe and advanced our present view on the violent nature of the universe in which massive black holes play a dominant role.

What are quasars? Astronomers today believe that a quasar is a compact region in the center of a galaxy in the early universe. The compact region is thought to surround a central supermassive black hole, much like the black hole thought to reside in the center of our own Milky Way galaxy and many (or most) other galaxies. The powerful luminosity of a quasar is thought to be the result of processes taking place in an accretion disk, or disk of material surrounding the black hole, as these supermassive black holes consume stars that pass too near. These sorts of activities happen during galaxy mergers, which peaked in the early universe.

ULAS J1120+0641 was the farthest quasar known in 2011. The quasar appears as a faint red dot close to the center. Composite image created from the Sloan Digital Sky Survey and the UKIRT Infrared Deep Sky Survey, via Wikimedia Commons.

The Chinese-born U.S. astrophysicist Hong-Yee Chiu coined the name quasar in May 1964 in the publication Physics Today. He wrote:

So far, the clumsily long name ‘quasi-stellar radio sources’ is used to describe these objects. Because the nature of these objects is entirely unknown, it is hard to prepare a short, appropriate nomenclature for them so that their essential properties are obvious from their name. For convenience, the abbreviated form ‘quasar’ will be used throughout this paper.

Currently, the farthest known quasar is ULAS J1342+0928, but it could get dethroned at any time. It has a redshift of z=7.54 and existed when the universe was about 690 million years old, just 5% of its current age.

Bottom line: Today in science, on February 5, 1963, Maarten Schmidt unraveled the mystery of quasars and pushed back the edges of our cosmos. His insight into the most distant and luminous objects known has changed the way scientists view the universe.