Today in science: Launch of Sputnik

Posted by Eleanor Imster and Deborah Byrd in Space | October 4, 2019 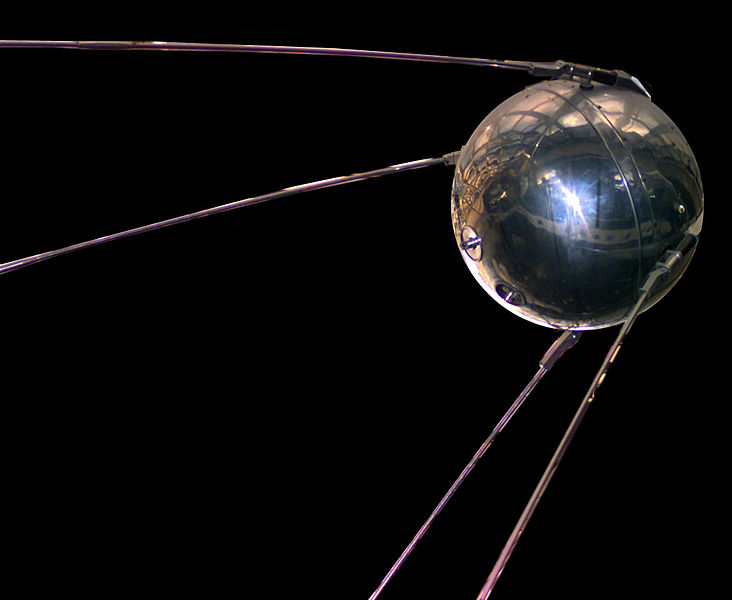 A replica of Sputnik 1, the first artificial satellite in the world to be put into outer space. The replica is stored in the National Air and Space Museum. Photo via NASA.

October 4, 1957. On this date, the Soviet Union launched Sputnik I, the first artificial satellite to orbit the Earth. According to many space historians, the Space Age began on this date.

Sputnik was a polished metal sphere made of aluminum alloy. It was 23 inches (58 cm) in diameter – about the size of a beach ball – and weighed just 184 pounds (83 kilograms). Its four external radio antennae were meant to broadcast radio pulses. And broadcast they did. For 21 days in 1957, people around the globe heard Sputnik’s unassuming beep beep on the radio.

Want to hear it? Check out the video below.

The pressurized sphere had five primary science objectives: test a process for placing an artificial “moon” into Earth orbit; provide information on the density of Earth’s atmosphere, calculated from Sputnik’s lifetime in orbit; test radio and optical methods of orbital tracking; determine the effects of radio wave propagation though Earth’s atmosphere; and check principles of pressurization that could be used on Earth-orbiting satellites.

Sputnik’s beeping was a symbol not only of Soviet Russia’s remarkable accomplishment, but also of what many immediately assumed was Russia’s superiority in space. The American public feared that the Soviets’ ability to launch satellites also translated into the capability to launch ballistic missiles that could carry nuclear weapons from Europe to the U.S.

Clearly, the next step was to place a living creature in space. On November 3, 1957, the Soviets launched Sputnik II, this time carrying a much heavier payload, including a stray dog named Laika, picked up from the Moscow streets just over a week before Sputnik II was set to launch. Sadly, according to the BBC, Laika died within hours of launch from panic and overheating. Read more about Laika from Time.com.

Sputnik I and Sputnik II sent shockwaves around the world. American political leadership scrambled to catch up. Ultimately, that extra push resulted in the United States sending the first astronauts to walk on the moon, on July 20, 1969. 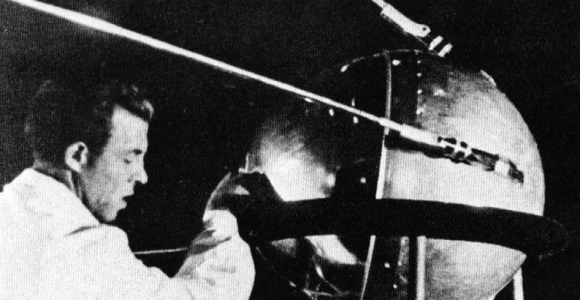 Historic image showing a technician putting the finishing touches on Sputnik I. Image via NASA/Asif A. Siddiqi.

For a musical take on the sudden advent of the Space Age, listen to “Surprise!” by Leslie Fish at fandom.com.

Beep-Beep. Boop-Boop. Hello there!
Sputnik sails, giggling, through the skies
Red flags, red faces, jump in the race, as
The space age begins with a surprise.

Bottom line: On October 4, 1957, the Soviet Union launched the Sputnik I satellite into Earth orbit, and the Space Age began. Hear the sound of Sputnik in orbit, in this post.