The full moons of summer may be best for photographs

The full moons of the summer months may be best for simple astrophotography because their low paths carry them past interesting foreground objects.

(Note: this was originally written for 2010. The dates will not be the same in other years. Check for the date and time of the full moon elsewhere on EarthSky.)

The full moon rising over a creepy old house or through the leaves of some craggy tree is the vision many of us have of Halloween, and to some extent, autumn in general. But what a lot of people don’t know is that be best time to get a photo of such an event may be in the summer.

You see, the full moon is opposite the sun in the sky. (That is, 180 degrees away.) Geometrically, that is what allows us to see it as a full moon. When the moon is in the same direction as the sun (near 0 degrees), we can’t see it at all. When it is at a 90 degree angle to the sun, we see a quarter phase. But the point is that the position of the full moon is related to the position of the sun at that time of year. Actually, it is a bit of an inverse reflection of where the sun is in the sky. In summer, the sun appears high in the sky because it at it maximum point north of the ecliptic. At the same time, the full moon is at its maximum point south of the ecliptic – traveling low in the sky as seen from the northern hemisphere.

To be specific, the moon is at its maximum point south of the ecliptic today, on July 22. However, the full moon is not until this coming Sunday evening for North America (See Tonight for Sunday). Normally, astronomers consider the best time for observation to be when an object is at it’s highest point in the sky. There is good reason for that, primarily that there is less atmosphere in the way when an object appears higher in the sky. With less atmosphere, there is less distortion and higher resolution. You can see more detail when there is less distortion, so generally speaking, the higher the better.

However, for non-professionals, the lower in the sky, the better. Well, up to a point anyway. Full phase is not a good time to observe or photograph the moon if you are hoping to view of capture a lot of detail. The best time to observe detail is when there are long shadows. But at full moon phase, the shadows of lunar surface features as observed at Earth are at their shortest, thus hiding most detail. This is a nightmare for professions, but most non-professional are not so demanding. (By this I do not in any way intend to demean the work of amateur astronomers, who are an important asset to astronomy, both for their research as well as their contributions to the promotion of science.) What I mean is that non-professionals are often interested in more than just the scientific content of their observations. If you are looking for a good chance to photograph the full moon, perhaps in an “artistic” context, the a low-flying summer full moon may be the best time to try it.

You can photograph any full moon when it is low to the horizon in rising, but Summer full moons are relatively low all night. This facilitates photography as the moon passes over hills, buildings and trees. For my money, the full moons of June, July and August are the best for this purpose.

I will not presume to tell anyone how to photograph the full moon, but most modern digital cameras are capable of acceptable and sometimes quite spectacular photos. I do suggest that you turn off the flash, and if possible, mount your camera on a tripod. Holding the camera by hand will rarely produce good results. Using a cable release or timed release (what you use when taking a group photo to give you time to run over and get in the group) will give the best results by minimizing camera vibration. Many digital cameras have autoexposure settings that will time exposures properly, although more advanced photographers will want more control. For the photos on this page (taken on impulse last night, 7/22/2010), I just set my camera on its tripod, turned off the flash, and let it do its thing. The photos are far from spectacular, but for an inexpensive, older camera, which was never intended for astrophotography with only a 3-power zoom, I think it took some decent, slightly atmospheric, shots.

I hope some of you will try it this Saturday, Sunday or Monday evenings. I also hope you will share your results, preferably by posting your photo to some online source and sending me the URL. Otherwise, contact me and I will see what we can do to post it. (Please do not post your email address or any other personal contact information in the comments section, as those are visible to the entire online world.) Leave me a message and I should be able to contact you via email, just do not put your email in the body of the comment.

Good luck and if you don’t try to photograph the July full moon, try again in August.

For more examples of submitted photos, be sure to check out EarthSky on Facebook: EarthSky

Update: Got a few more shots on 7/24, through the limbs of a cottonwood tree. Because my camera (OlympusD-595) has only a 3X zoom, the original image is rather small, so I have cropped a lot. Also, the autoexposure tends to overexpose the moon in order to get the foreground, so I variously adjusted exposures in some cases “manually,” meaning that when the autoexposure was taking 3-4 seconds and resulting in an over exposure, I tried placing my hand over the lens after a second or so to stop the exposure. Not very high-tech, but it seems to work. I also tried adjusting contrast in the final image using software (Faststone Image Viewer). 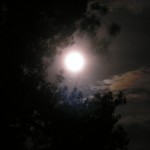