For the first time, astronomers have detected a planet orbiting a white dwarf star. If further confirmed, the discovery shows that some planets could survive the destruction of their sun-like stars, and some might even remain potentially habitable. 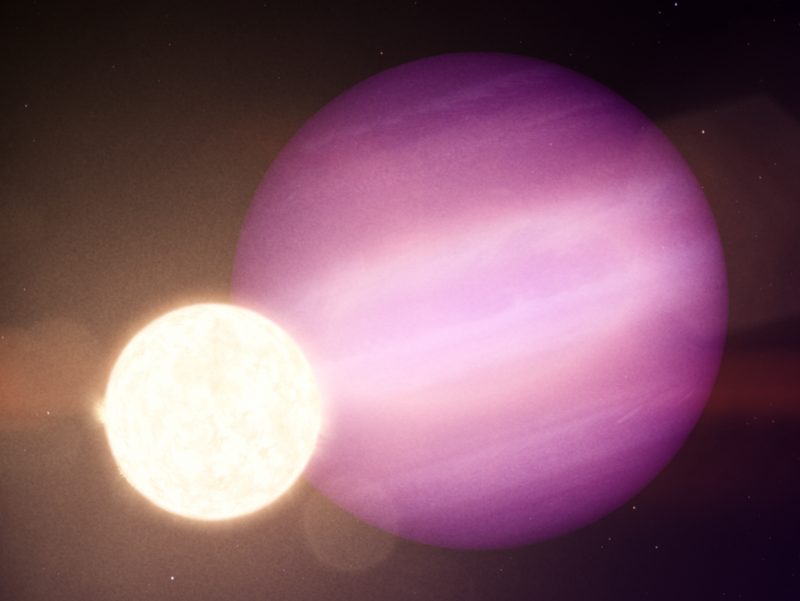 Exoplanets have been found orbiting various types of stars, including some similar to our own sun and including red dwarf stars, the most common stars in our galaxy. But now, astronomers using data from NASA’s Transiting Exoplanet Survey Satellite (TESS) and the now-retired Spitzer Space Telescope have announced something brand new: a Jupiter-sized planet whirling around a white dwarf star. White dwarfs are the small, very dense leftover cores of once sun-like stars that are now dead. If confirmed, this will be the first still-intact planet found orbiting a white dwarf: a survivor of a star’s death throes.

The peer-reviewed results were published in Nature on September 16, 2020. From the abstract:

Finding a planet still orbiting a white dwarf is exciting because most planets orbiting a sun-like star would be destroyed when that star first expands into a red giant star before shrinking down to a hot, white remnant core. This planet, if further confirmed, survived that process.

The planet, called WD 1856 b, is about the size of Jupiter, and orbits the white dwarf once every 34 hours. That’s 60 times faster than Mercury orbits the sun. This system is 80 light-years away in the northern constellation Draco. The white dwarf is about 11,000 miles (18,000 kilometers) across, may be up to 10 billion years old, and is a distant member of a triple star system.

Normally, of course, we think of planets as being much smaller than their stars. But in this case, the planet is orbiting a white dwarf, which is only 40% larger than Earth, so this planet is much larger than the white dwarf it orbits.

Andrew Vanderburg at the University of Wisconsin-Madison, who led the study, said in a statement:

WD 1856 b somehow got very close to its white dwarf and managed to stay in one piece. The white dwarf creation process destroys nearby planets, and anything that later gets too close is usually torn apart by the star’s immense gravity. We still have many questions about how WD 1856 b arrived at its current location without meeting one of those fates.

We’ve known for a long time that after white dwarfs are born, distant small objects such as asteroids and comets can scatter inward towards these stars. They’re usually pulled apart by a white dwarf’s strong gravity and turn into a debris disk. That’s why I was so excited when Andrew told me about this system. We’ve seen hints that planets could scatter inward, too, but this appears to be the first time we’ve seen a planet that made the whole journey intact. 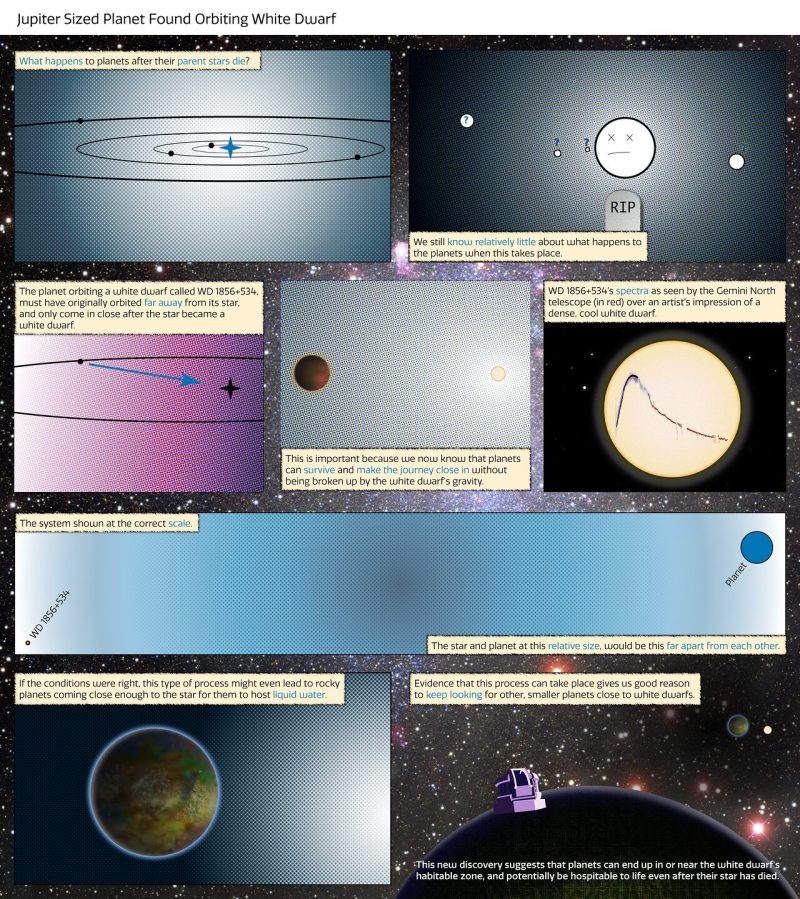 The researchers aren’t sure how the planet managed to survive intact, but it may have been in a long, elliptical orbit. According to co-author Juliette Becker at Caltech:

The most likely case involves several other Jupiter-size bodies close to WD 1856 b’s original orbit. The gravitational influence of objects that big could easily allow for the instability you’d need to knock a planet inward. But at this point, we still have more theories than data points.

In a press release for NOIRLab, Vanderburg commented on how the discovery was surprising, since since previously, only rocky debris had been seen around a white dwarf:

The discovery came as something of a surprise. A previous example of a similar system, where an object was seen to pass in front of a white dwarf, showed only a debris field from a disintegrating asteroid.

It’s also possible that the other two stars in the system, red dwarfs G 229-20A and G 229-20B, exerted a gravitational tug on the planet over billions of years, with a subsequent flyby of a rogue star perturbing the system.

The researchers used Spitzer to observe the system in infrared, just a few months before the space telescope was decommissioned and the mission ended. They concluded the object was a planet and not a brown dwarf or low-mass star since it did not emit any light on its own. When the researchers compared the Spitzer data to visible light transit observations taken with the Gran Telescopio Canarias in the Canary Islands, they saw no discernible difference. The age of the system and other data also told the researchers that the object was most likely a planet. 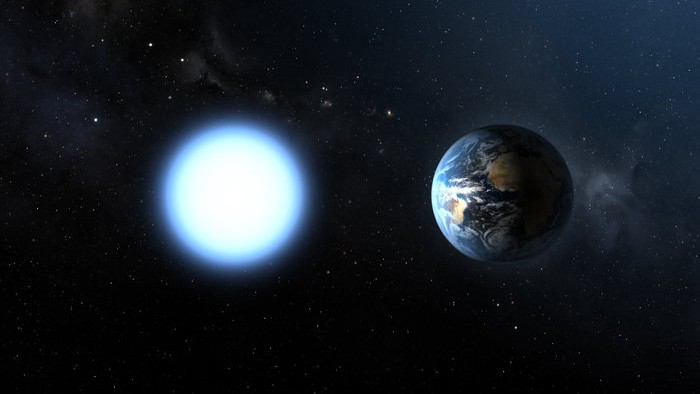 White dwarf stars are very small, typically about the size of the Earth. Image via European Space Agency.

Additionally, because we didn’t detect any light from the planet itself, even in the infrared, it tells us that the planet is extremely cool, among the coolest we’ve ever found.

We’ve had indirect evidence that planets exist around white dwarfs and it’s amazing to finally find a planet like this.

As measured by Spitzer, the upper limit of the temperature on the planet is 63 degrees Fahrenheit (17 degrees Celsius), which is very Earth-like. However, the planet is a gas giant, not a rocky world, so unlikely to be habitable in this case.

Follow-up observations were also conducted using the 10-meter Hobby-Eberly Telescope at the McDonald Observatory at the University of Texas. Other observations included ones from Gemini Observatory, part of NOIRLab.

So what’s next? Could there even be habitable planets around white dwarfs?

That answer may come with NASA’s upcoming James Webb Space Telescope (JWST). Vanderburg, along with co-author Lisa Kaltenegger and others, found that, using simulated observations, water and carbon dioxide could be detected on hypothetical rocky worlds orbiting white dwarfs by observing just five transits. Those results are available in another paper published in Astrophysical Journal Letters on September 16, 2020. 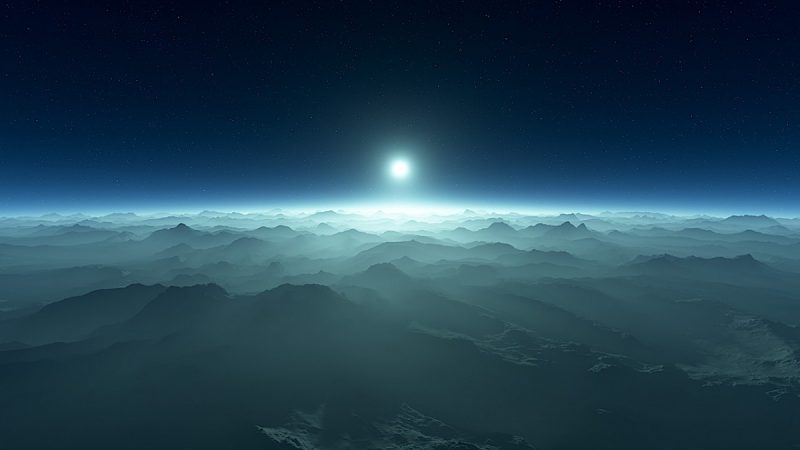 The near-term search for life beyond the solar system currently focuses on transiting planets orbiting small M dwarfs, and the challenges of detecting signs of life in their atmospheres. However, planets orbiting white dwarfs (WDs) would provide a unique opportunity to characterize rocky worlds … rocky planets in the WD habitable zone therefore represent a promising opportunity to characterize terrestrial planet atmospheres and explore the possibility of a second genesis on these worlds.

Even more impressively, Webb could detect gas combinations potentially indicating biological activity on such a world in as few as 25 transits. WD 1856 b suggests planets may survive white dwarfs’ chaotic histories. In the right conditions, those worlds could maintain conditions favorable for life longer than the time scale predicted for Earth. Now we can explore many new intriguing possibilities for worlds orbiting these dead stellar cores.

If rocky planets exist around white dwarfs, we could spot signs of life on them in the next few years.

Co-lead author Ryan MacDonald expanded a bit on this, saying:

When observing Earth-like planets orbiting white dwarfs, the James Webb Space Telescope can detect water and carbon dioxide within a matter of hours. Two days of observing time with this powerful telescope would allow the discovery of biosignature gases, such as ozone and methane.

We know now that giant planets can exist around white dwarfs, and evidence stretches back over 100 years showing rocky material polluting light from white dwarfs. There are certainly small rocks in white dwarf systems. It’s a logical leap to imagine a rocky planet like the Earth orbiting a white dwarf. 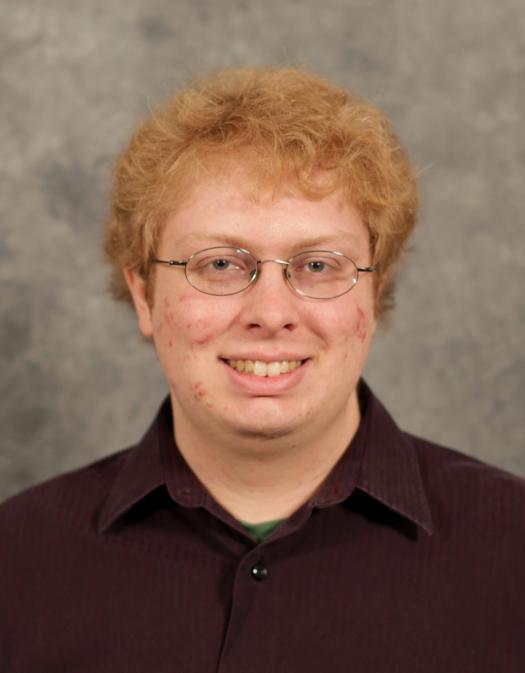 Andrew Vanderburg at the University of Wisconsin-Madison, who led the new study. Image via McDonald Observatory.

That’s quite an amazing thought, that life could still exist on a planet orbiting a star that is long-dead. As Kaltenegger mused:

What if the death of the star is not the end for life? Could life go on, even once our sun has died? Signs of life on planets orbiting white dwarfs would not only show the incredible tenacity of life, but perhaps also a glimpse into our future.

Additional videos about this discovery are on the Goddard Media Studios website.

Bottom line: For the first time, astronomers have detected a planet orbiting a white dwarf star.