The Cassini spacecraft finished its four-year mission to explore Saturn and its rings and moons in June 2008. But it is still sending back amazing images. Here are two of the most recent.

NASA’s Cassini spacecraft has returned some stunning images of Saturn’s moon Enceladus and another moon of Saturn, called Dione.

The spacecraft took these images yesterday (December 20, 2010). Cassini swung past Dione at a distance of about 60,000 miles. It’s Dione’s image that is immediately below. Notice the bright, fractured region – close to the line between dark and light on Dione. These bright fractures are known to space scientists as “wispy terrain,” and they’re a sign that Dione was geologically active sometime in the past. Using images from Cassini, such as this one, NASA scientists say they’ll now be able to measure the depth and extent of these fractures more accurately. 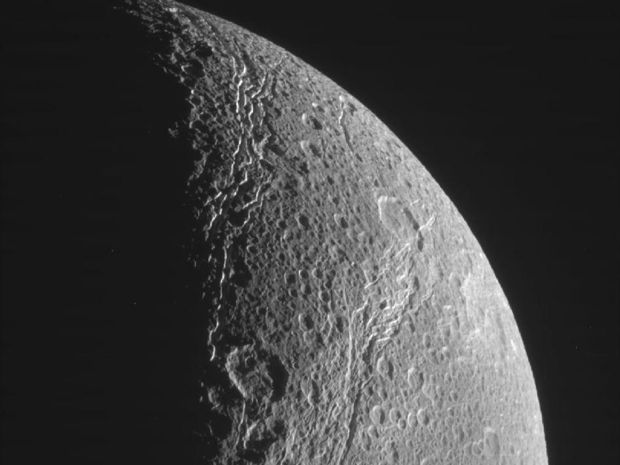 Eight hours after it took the Dione image above, Cassini swept past Saturn’s moon Enceladus. It came within 30 miles of the moon’s northern hemisphere. Several images show this moon backlit, such as the one below, with the dark outline of the moon crowned by glowing jets from the south polar region. Notice that there are several separate jets, or sets of jets, emanating from the fissures known to scientists as “tiger stripes.” Scientists will use the images to pinpoint the jet source locations on the surface and learn more about their shape and variability. 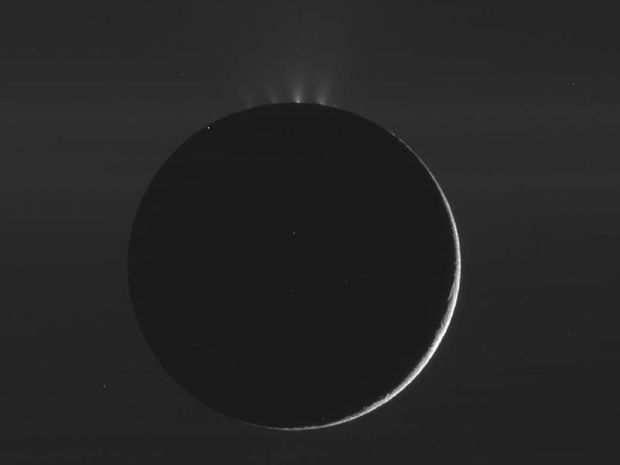 As Cassini passed close to Enceladus, the spacecraft’s instruments worked on searching for particles that might form a tenuous atmosphere around this Saturnian moon.