Why does Venus’ upper atmosphere circle the planet in just 4 Earth-days, while the planet itself takes 243 Earth-days to spin once? Japan’s Akatsuki spacecraft probed the mysterious “super-rotation” of Venus’ clouds. 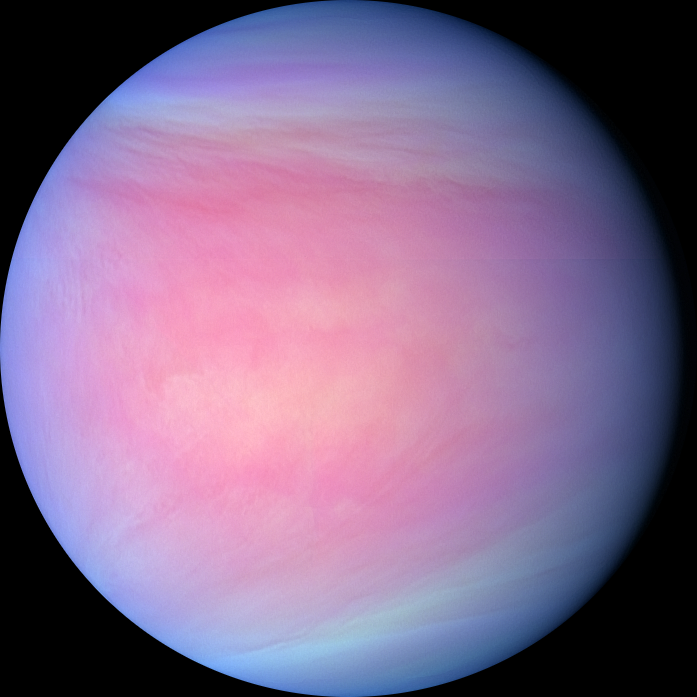 Japan’s Akatsuki spacecraft – aka the Venus Climate Orbiter – got off a rocky start but has been sending back useful data from Venus for several years now. Akatsuki launched in May, 2010, but failed to enter orbit around Venus in December of that year. Space engineers saved the day with a 20-minute firing of the craft’s attitude control thrusters, placing the craft into an alternative orbit around Venus – albeit a highly elliptical one – five years later, in 2015. This month, at the EPSC-DPS Joint Meeting 2019 in Geneva, Switzerland, Kiichi Fukuya of the University of Tokyo reported on new insights into the mysterious super-rotation of Venus’ atmosphere, made possible by Akatsuki’s data. That is, the upper atmosphere of Venus rotates around the planet much faster than the planet spins; the atmosphere rotates around the planet in just 4 Earth-days, while the planet itself takes 243 Earth-days to spin once. Fukuuya said:

The most exciting discovery is the frequent occurrence of equator-ward motions [of the atmosphere] on the nightside. This is in contrast to the strong poleward circulation on the dayside we have observed previously at other wavelengths.

Overall, these scientists reported that data from Akatsuki show:

… striking variety in wind speeds year-on-year and between the planet’s northern and southern hemispheres.

Takeshi Horinouchi of Hokkaido University, Japan, and Yeon Joo Lee of JAXA/ISAS and TU Berlin also detected planetary-scale atmospheric waves at the cloud tops, which may interact with the super-rotation. For these studies they used:

Equator-wards motion of clouds on night side. Image via University of Tokyo.

Pole-wards motion of clouds on day side. Image via University of Tokyo.

And they said the difference they observed in Venus winds between the planet’s hemispheres might be linked to a second mystery at Venus: an as-yet unidentified chemical in the atmosphere that strongly absorbs ultraviolet radiation from the sun. You might know that Venus is considered Earth’s “twin” in size and desnity. It’s a world very similar to Earth in many ways, but its atmosphere sets it apart. The atmosphere of Venus – which is mostly carbon dioxide – is extremely dense and hot; atmospheric pressure on Venus’ surface is some 90 times that of Earth. This as-yet-unknown ultraviolet absorber in the atmosphere is interesting to these scientists because its variability in Venus’ atmosphere might cause the asymmetry in wind speeds between the planet’s northern and southern hemispheres. Thus the scientists commented:

Our results provide new questions about the atmosphere of Venus, as well as revealing the richness of variety of the Venus atmosphere over space and time. 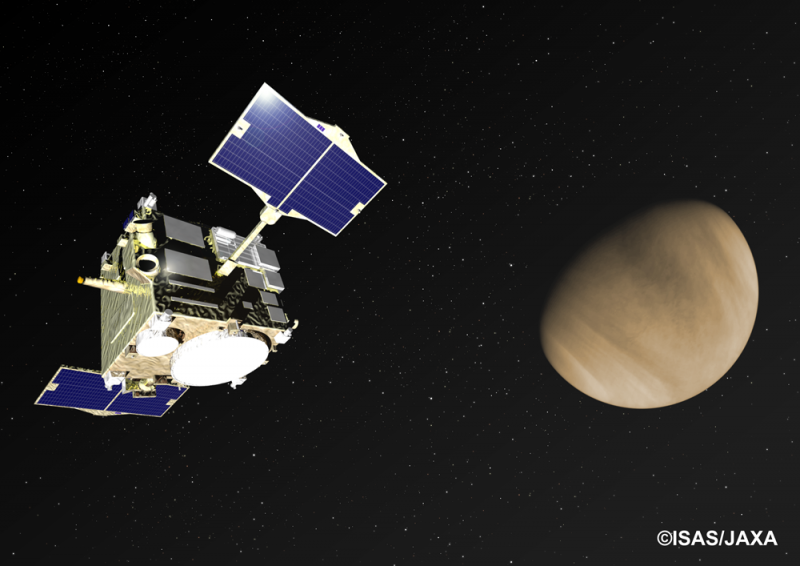 Artist’s concept of Akatsuki in orbit around Venus. Image via ISAS/JAXA.