A black hole candidate known as M82 X-1 appears to have a mass of about 400 suns, making it one of only half a dozen suspected midsize black holes.

Astronomers have used archival data from from an X-ray satellite to identify what they now believe is an unusual midsize black hole. We know of stellar black holes formed by dying stars; they are relatively small, measuring up to around 25 times the mass of our sun. And we know of supermassive black holes – now thought to reside in the cores of most galaxies – containing hundreds of thousands to billions of times the mass of the sun. But the black hole called M82 X-1 – the brightest X-ray source in the galaxy Messier 82, or M82, located 12 million light-years away – is thought to be around 400 times the sun’s mass. And that characteristic makes it very rare.

Between the two extremes of stellar and supermassive black holes, it’s a real desert, with only about half a dozen objects whose inferred masses place them in the middle ground.

Astronomers from Goddard and the University of Maryland, College Park (UMCP) have suspected M82 X-1 of being midsize for at least a decade, but compelling evidence excluding it from being a stellar black hole proved elusive. By going over past RXTE observations, the astronomers found specific changes in brightness that helped them determine M82 X-1 measures 400 solar masses. NASA said in a press release:

As gas falls toward a black hole, it heats up and emits X-rays. Variations in X-ray brightness reflect changes occurring in the gas. The most rapid fluctuations happen near the brink of the black hole’s event horizon, the point beyond which nothing, not even light, can escape.

Astronomers call these rhythmic pulses quasi-periodic oscillations, or QPOs. For stellar black holes, astronomers have established that the larger the mass, the slower the QPOs, but they could not be sure what they were seeing from M82 X-1 was an extension of this pattern.

By looking back at archival data from NASA’s Rossi X-ray Timing Explorer (RXTE) satellite, astronomers found a telltale 3:2 rhythmic pattern coming from M82 X-1. That is, for every three pulses from one member of a QPO pair, its partner pulses twice. The 3:2 rhythm helped astronomers determine the mass of M82 X-1 as being around 400 solar masses, placing it in a category with only a handful of other known midsize black hole candidates.

Watch the video above for more details, or read more about M82 X-1 from NASA 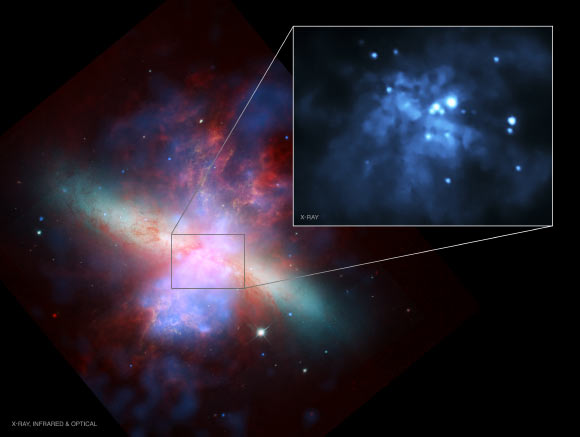 Bottom line: A black hole candidate known as M82 X-1 appears to have a mass of about 400 suns, making it one of only half a dozen known midsize black holes.