Astronomers find a nearby river of stars

Posted by Eleanor Imster and Deborah Byrd in Space | February 24, 2019

Researchers used Gaia data to find a stellar stream of at least 4,000 stars that have been moving together in space since they formed, about a billion years ago. 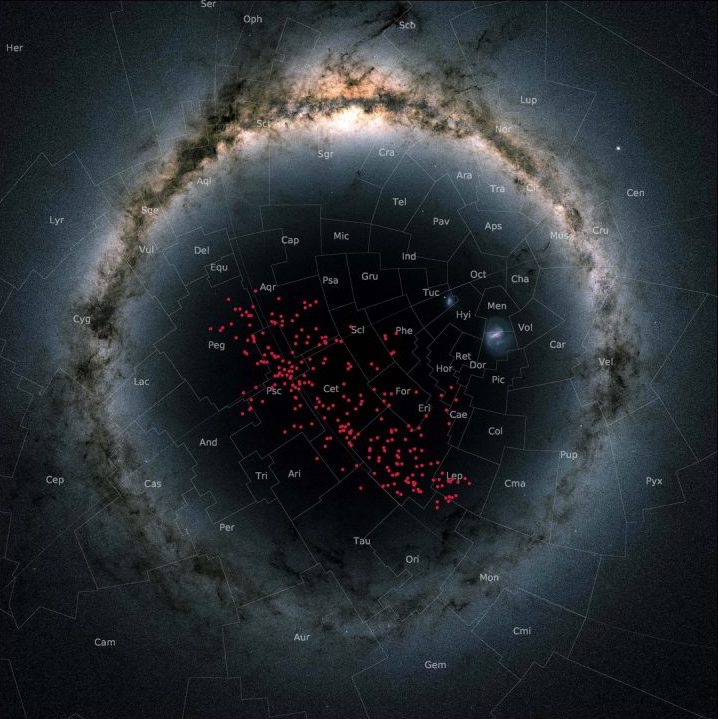 The night sky is centered on the south galactic pole in this image, which is a stereographic projection. In this special projection, the Milky Way curves around the outskirts of the image in an arc. The stars in the newly discovered stellar stream are shown in red. As seen in our sky, they are crossing the southern hemisphere of the galaxy, amidst many well-known constellations. Image via University of Vienna.

Researchers using data from the Gaia satellite have found a river of stars – what astronomers call a stellar stream – currently traveling through our solar neighborhood. The stream is relatively nearby – only 326 light-years away – and contains at least 4,000 stars that have likely been moving together in space since they formed about one billion years ago.

There are a number of stellar streams known in our galaxy, but this is a new one to astronomers. It consists of stars that were born together as a star cluster whose member stars are now dispersing into space, pulled apart by the gravitational field of the Milky Way.

University of Vienna astrophysicist Stefan Meingast is lead author of a new paper about the discovery, published February 15, 2019, in the journal Astronomy & Astrophysics. Meingast said in a statement:

Most star clusters in the galactic disk disperse rapidly after their birth as they do not contain enough stars to create a deep gravitational potential well, or in other words, they do not have enough glue to keep them together. Even in the immediate solar neighborhood, there are, however, a few clusters with sufficient stellar mass to remain bound for several hundred million years. So, in principle, similar, large, stream-like remnants of clusters or associations should also be part of the Milky Way disk.

Thanks to the precision of the Gaia measurements, the authors could measure the 3D motion of stars in space. When they were looking at the distribution of nearby stars moving together, one particular group of stars immediately caught the eye of the researchers. It was a group of stars that showed precisely the expected characteristics of a stellar stream.

The newly found stellar stream covers much of the southern sky. Astronomers say it was “hiding in plain sight.” Astronomer João Alves at the University of Vienna is a co-author of the study. Alves said:

Identifying nearby disk streams is like looking for the proverbial needle in a haystack. Astronomers have been looking at, and through, this new stream for a long time, as it covers most of the night sky, but only now realize it is there, and it is huge, and shockingly close to the sun. Finding things close to home is very useful, it means they are not too faint nor too blurred for further detailed exploration, as astronomers dream.

The authors also determined the stream’s age to be around one billion years. As such, it has already completed four full orbits around our galaxy. During this time – this billion years, or four cosmic or galactic years for these stars – the young star cluster, born from a single cloud of gas and dust in space, has developed its stream-like structure due to being pulled upon by the Milky Way’s gravity. Eventually, its stars will disperse as single or (much smaller) multiple star systems into space, just as our own sun is thought to have left the star cluster of its birth billions of years ago.

A statement from these astronomers said:

Due to sensitivity limitations of the Gaia observations, [our] selection only contained about 200 sources. An extrapolation beyond these limits suggests the stream should have at least 4,000 stars, thereby making the structure more massive than most known clusters in the immediate solar neighborhood.

Verena Fürnkranz of the University of Vienna Department of Astrophysics is a study co-author. She said:

As soon as we investigated this particular group of stars in more detail, we knew that we had found what we were looking for: A coeval, stream-like structure, stretching for hundreds of parsecs across a third of the entire sky. It was so thrilling to be part of a new discovery.

The researchers say that the newly-discovered nearby system can be used as a valuable gravity probe to measure the mass of the galaxy. With follow-up work, this stream could help astronomers learn how galaxies get their stars, test the gravitational field of the Milky Way, and, because of its proximity, become a wonderful target for planet-finding missions.

Bottom line: A team of astronomers have discovered a nearby stellar stream of at least 4,000 stars that have been moving together in space since they formed about 1 billion years ago.

Source: Extended stellar systems in the solar neighborhood. II. Discovery of a nearby 120° stellar stream in Gaia DR2

Via Astronomy & Astrophysics/University of Vienna