The brightest star in the sky, Sirius, is about as bright as a 100-Watt incandescent light bulb viewed from a distance of more than 5 miles.

The stars at night,
are big and bright,
deep in the heart of Texas

If you’ve ever been there – deep in the heart of Texas, I mean – then you would swear it’s true. The stars do seem big and bright from dark locations. And much as I love the Lone Star State, the stars are just as big and bright from many other locations, such as way out on the rolling prairie, in the middle of the desert, or high on a mountain. But just how big and bright are the stars? In fact, almost all the stars easily visible to the unaided eye from Earth are indeed bigger and brighter than our sun if you could view them side by side with the sun in space. But here we’re talking about how stars appear from Earth.

No doubt you have heard someone say that a particular sky was ablaze with stars. Or maybe there were a million stars in the sky. Perception is relative, and sometimes, although the sky might seem ablaze or inhabited by millions of stars, or any one of a number of other strong statements people tend to make about the night sky, the reality may be different. There is a good deal of poetic license involved when people describe the night sky, and understandably so. A starlit sky from a very dark location can be stunning. But, in reality, no one can see millions of stars with the eye alone. With the most excellent eyesight, under the best sky conditions, you can see only a few thousand stars.

And, in reality, those few thousand stars we can see with the eye alone from Earth actually appear pretty dim. How dim? I’ll tell you in this post – and also tell you how bright all the stars would appear if rolled into a single point in the sky.

Be forewarned, the following paragraphs contain numbers. If numbers hurt your head, you can just skip on to the last paragraph. Otherwise, read on.

Astronomers have several scales and terminologies to describe the brightness of stars, but the first to be developed, and what we are interested with here, is called apparent magnitude. It is a measure of how bright stars appear, as viewed from Earth and compared to each other.

The Greek astronomer Hipparchus, born in the 2nd century BC, founded trigonometry, and compiled the first table of chords. He invented the method of fixing terrestrial positions by circles of latitude and longitude. He discovered the precession of the equinoxes. And he probably also founded the magnitude system for the brightness of stars. Image via NNDB.

When more modern astronomers adopted the system, they re-adjusted it to accommodate some especially bright stars, to which they assigned a magnitude of zero, and the brightest star of all, Sirius in the constellation Canis Major the Greater Dog, which now has an official apparent magnitude of minus 1.44.

Sirius is the brightest star as seen from Earth (-1.44). This star is particularly prominent in the southern skies in winter and spring. But there are at least four other normal objects that are brighter. Planet Mercury can get to nearly –2.5, while both Jupiter and Mars sometimes approach magnitude –3. Venus, however, far outshines any other planet at its maximum brightness of about –4.9, six times brighter than Jupiter or Mars at their brightest.

That’s all well and good, but it doesn’t help give an idea of how bright nighttime stars appear to us. We need something with which to compare it, something that most people will know. I will use a 100-Watt* incandescent light bulb. With rise in use of CFL lights and other technologies, the old fashioned incandescent bulb is not as common as it used to be, but I suspect that most who read this will remember them, and maybe still have a few around.

So let’s compare a 100-Watt light bulb to the brightness of the star Sirius, which at magnitude –1.44 is the brightest star visible to the unaided human eye in Earth’s sky.

This may be hard to believe, but a 100-Watt incandescent bulb, as viewed at a distance of 10 meters (about 33 feet), is nearly three quarters of a million times brighter than Sirius! In order for the light bulb to appear approximately the same brightness as the star, we would need to view it from a distance of about 8,500 meters, which is 8.5 kilometers or about 5.3 miles. 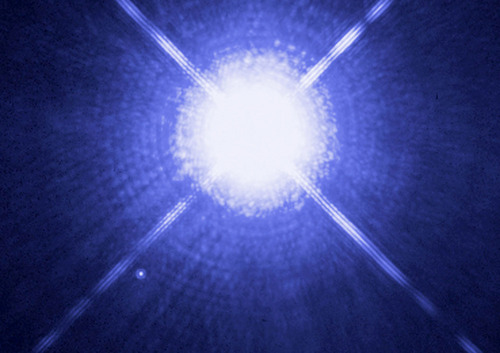 Hubble Space Telescope image of Sirius, the sky’s brightest star. The little dot in the lower left is a companion star, Sirius B. Read more about this image. Credit: NASA, ESA and G. Bacon (STScI)

Now imagine that you gather all the stars visible at night into one pinpoint of light. How bright would that be? Would it blind you? Would it light the sky like daylight?

Hardly. The total brightness of more than 8,000 stars down to the typical limit of human vision is roughly magnitude –4.95, which is just a shade brighter than Venus. That is bright enough to cast a very faint shadow, and perhaps bright enough to read newspaper headlines, but not much else. If you factor in the integrated magnitude of the Milky Way, which is about –5, that brings the estimated total magnitude to –5.75. That’s roughly twice the brightness of Venus…. but it considers the whole count of visible stars and the Milky Way, including those that are below the horizon at any one time.

So not counting the sun, moon or planets, the full brightness of stars is only about that of the planet Venus, but spread out over the entire sky.

The point is, despite poetic hyperbole, the stars in the night sky are not very bright. Some of them seem very bright – even dazzling – but that is in comparison to the dark sky around them. This points up the growing problem of light pollution, which decreases the contrast and makes stars harder to see. Any light, whether from a streetlight, shopping center, or the annoying neighbor whose backyard floodlight shines in your bedroom window all night, is wasteful and contributes to the loss of dark skies.

Notes
*A Watt is a measure of the amount of electrical power a bulb uses, but not necessarily of brightness. There are other more appropriate terms, such as the lumen to describe brightness. A standard 100-Watt incandescent bulb produces about 1,700 lumens, whereas a typical CFL uses only about 23 Watts for approximately same brightness.

**Please note that this is just a rough comparison and does not take into account the spectral characteristics of each source, nor the visual sensitivity of the observer. The light emissions of the light bulb tend toward the longer (redder) parts of the visible spectrum, whereas Sirius tends toward the shorter (bluer) end.