Astronomers have observed signals from a highly magnetized neutron star, indicating starquakes that set the neutron star ringing like a bell. 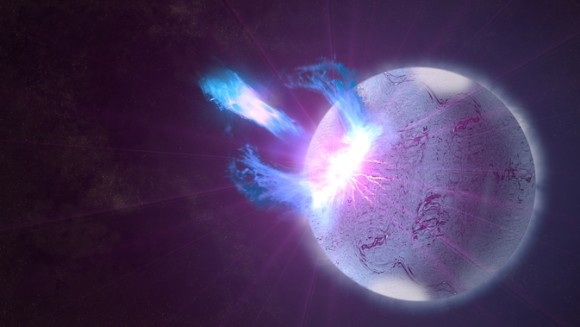 Typical neutron stars have magnetic fields trillions of times stronger than Earth’s. The 23 known magnetars discovered so far by astronomers are a special type of neutron star with magnetic fields a thousand times more powerful than that. On January 22, 2009, NASA’s Fermi Gamma-ray Space Telescope detected rapid-fire, high-energy blasts from one of these magnetars. The object is called SGR J1550-5418. It’s located about 15,000 light-years away in the direction of the southern constellation Norma. On October 21, 2014 – at the Fifth Fermi International Symposium in Nagoya, Japan – astronomers spoke of their work analyzing data from the 2009 event. They said they found underlying signals that might indicate a starquake on this magnetar that caused it to “ring like a bell.”

Rare giant flares from magnetars have produced such signals in the past, but not often. In 40 years, astronomers have observed these flares just three other times – in 1979, 1998 and 2004. The signals related to starquakes – which set the neutron stars ringing like a bell – were identified only in the two most recent events. Anna Watts is an astrophysicist at the University of Amsterdam in the Netherlands and co-author of the new study about the burst storm from SGR J1550-5418. She spoke of:

… likely twisting oscillations of the star where the crust and the core, bound by the super-strong magnetic field, are vibrating together.

In the midst of SGR J1550-5418’s 2009 burst storm, Swift’s X-Ray Telescope also captured an expanding halo produced by the magnetar’s brightest bursts. The rings formed as X-rays from the brightest bursts scattered off of intervening dust clouds. Clouds closer to Earth produced larger rings, as shown in the video below.

Neutron stars are the densest, most magnetic and fastest-spinning objects in the universe that scientists can observe directly. Because a neutron star’s solid crust is locked to its intense magnetic field, a disruption of one immediately affects the other.

It takes an incredible amount of energy to convulse a neutron star. The closest comparison on Earth is the 9.5-magnitude Chilean earthquake of 1960, which ranks as the most powerful ever recorded on the standard scale used by seismologists. On that scale, said Watts, a starquake associated with a magnetar giant flare would reach magnitude 23.

SGR J1550-5418 was discovered by NASA’s Einstein Observatory, which operated from 1978 to 1981. It was quiet until October 2008, when it entered a period of eruptive activity that ended in April 2009. At times, the object produced hundreds of bursts in as little as 20 minutes, and the most intense explosions emitted more total energy than the sun does in 20 years.

High-energy instruments on many spacecraft, including NASA’s Swift and Rossi X-ray Timing Explorer, detected hundreds of gamma-ray and X-ray blasts.