Analysis of data from the Gaia satellite shows a powerful burst of star formation – a stellar baby boom – in our Milky Way galaxy 2 to 3 billion years ago. This single burst might have created half the stars in the galaxy’s flat disk. 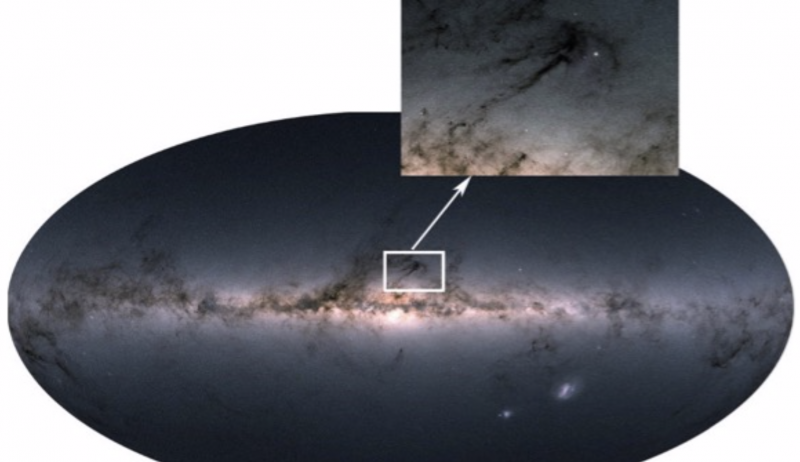 This photographic image depicts our Milky Way galaxy as seen from the inside, but it isn’t a conventional photo. Instead, it’s the result of the integration of all the radiation received by the Gaia satellite during 22 months of continuous measurements. The shining dots aren’t stars, but instead stellar clusters with the massive and youngest stars of the region. The dark filaments track the gas and dust distribution, where the new stars are born. The insert shows the Rho Ophiuchi cloud complex, one of the closest star-forming regions to our solar system. Image via ESA/Gaia/DPAC/University of Barcelona.

How do we know how our Milky Way galaxy formed and evolved? How do we know the rate at which the galaxy’s stars were born, and how that rate might have changed over billions of years of Milky Way history? Like so many new insights about our galaxy over the past year, new answers to these questions have come via ESA’s Gaia satellite, and its second data release of April 2018. The University of Barcelona said on May 8, 2019, that a team of its astronomers – along with astronomers at the Besançon Astronomical Observatory in France – analyzed Gaia data to learn of a powerful star formation burst in our Milky Way some 2 to 3 billion years ago. They now believe this burst marked the birth of more than 50 percent of the stars in the galaxy’s flat disk. An article at Nature Research Highlights explained:

Roger Mor at the University of Barcelona in Spain and his colleagues turned to data from the Gaia satellite, which precisely measures the distance from Earth to millions of stars. These measurements allow researchers to calculate a star’s true brightness and size, which can be fed into models to infer its age.

The team simulated star formation in the Milky Way over time, and found it was in steady decline until roughly five billion years ago, when production suddenly ramped up. The researchers estimate that half the total mass of all the stars ever created in the Milky Way’s thin disk – which contains most of the galaxy’s stars – was produced during this period.

The study was published in April 2019 in the peer-reviewed journal Astronomy & Astrophysics. 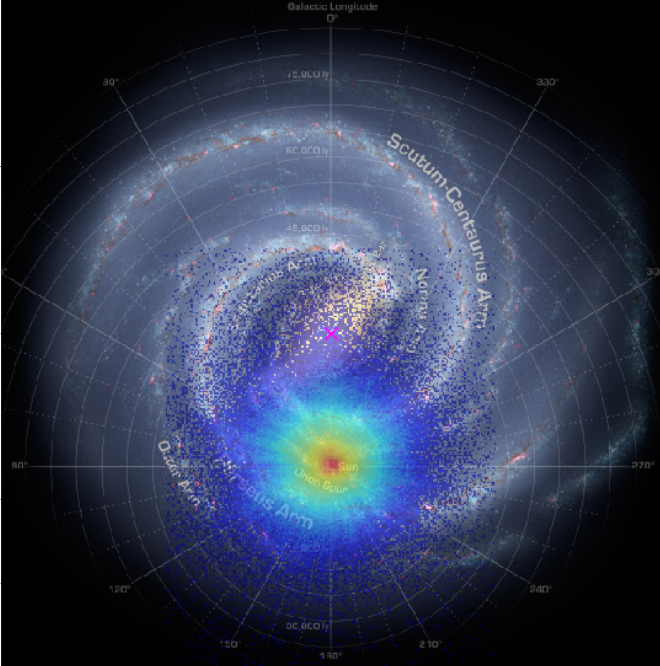 Artist’s concept of top view of Milky Way galaxy, showing distribution of 3 million stars used in a study by the Gaia satellite to detect the star formation burst. Gaia provided a precise distance measurement for each of these objects. Image via University of Barcelona.

The timescale of this star formation burst together with the great amount of stellar mass involved in the process, billions of solar masses, suggests the disk of our galaxy did not have a steady and paused evolution. It may have suffered an external perturbation that began about five billion years ago.

Other studies using Gaia data have shown mergers and near mergers of other galaxies with our Milky Way (and this process is still ongoing, with the Milky Way and neighboring Andromeda galaxy due to collide, perhaps 4.5 billion years from now). These astronomers said that one of these mergers could be the cause of the powerful star formation burst detected in this study.

Bottom line: A new study using data from Gaia’s second date release reveals that stars in our Milky Way galaxy did not form at a steady or predictable rate, but rather at a rate determined in part by mergers of the Milky Way with other galaxies in its cosmic neighborhood. Galactic mergers appear to have caused a burst of star formation in the Milky Way, 2 to 3 billion years ago. The researchers estimate that half the total mass of all the stars ever created in the Milky Way’s thin disk – which contains most of the galaxy’s stars – was produced during this period.

Source: Gaia DR2 reveals a star formation burst in the disc 2–3 Gyr ago

Via University of Barcelona