Scientists with NASA’s Juno mission say they have detected sprites or elves – electrical phenomena above thunderstorms on Earth – in the clouds of Jupiter for the first time. Unlike the red-colored earthly ones however, the Jovian ones are blue. 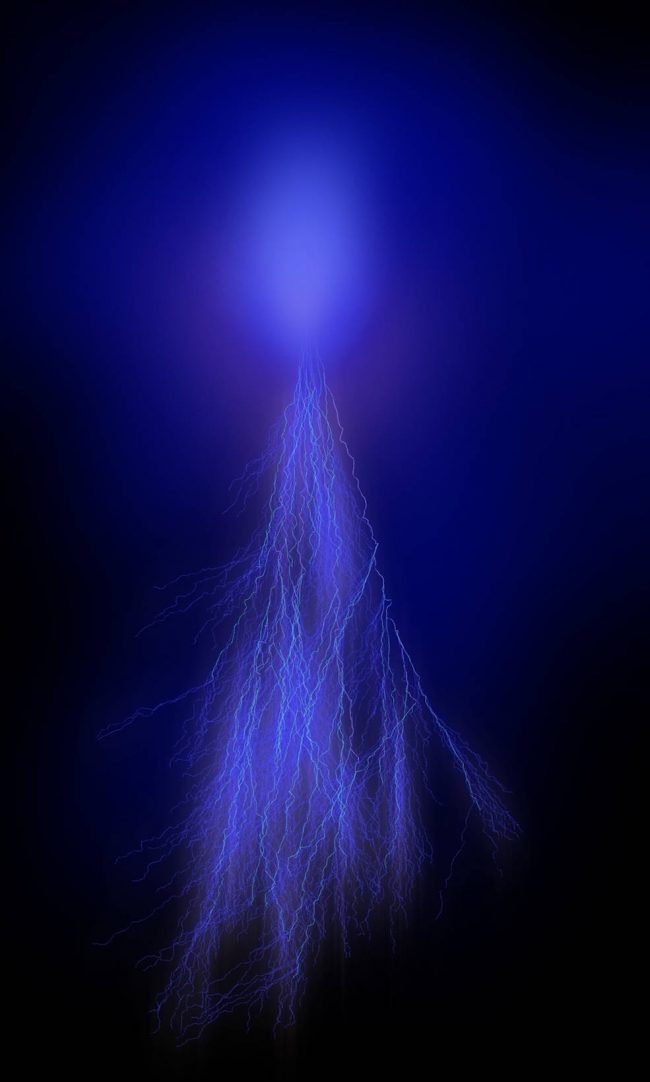 View larger. | Artist’s concept of a lightning sprite in Jupiter’s atmosphere, based on findings from the Juno spacecraft, which is orbiting Jupiter now. Scientists believe that, on Jupiter, sprites are likely blue in color. Image via NASA/ JPL-Caltech/ SwRI.

Lightning sprites are fleeting but powerful electrical discharges high up in Earth’s atmosphere … above thunderstorms. They’re called transient luminous events or TLEs by scientists. They are eerily beautiful, and not easy to capture on film, and it wasn’t that long ago that scientists were debating their existence in Earth’s atmosphere. Now they’re a confirmed natural phenomenon on Earth – the subject of much study by meteorologists – and nature photographers sometimes capture them. And now NASA has found the first evidence of sprites and/or elves – rapidly expanding disk-shaped regions of luminosity, lasting less than a thousandth of a second – somewhere other than Earth. They’ve found them in the turbulent upper atmosphere of our solar system’s largest planet, Jupiter.

The peer-reviewed findings were announced by scientists with the Juno mission at Jupiter and published in the Journal of Geophysical Research: Planets on October 27, 2020. The results were also presented in a press conference during the annual meeting of the American Astronomical Society’s Division for Planetary Sciences (DPS 2020).

Scientists had theorized that sprites or elves should be present in Jupiter’s atmosphere, but this is the first good evidence that they actually exist. How did they find them?

Along with taking images in regular light, Juno also views Jupiter with its ultraviolet spectrograph instrument (UVS). In the summer of 2019, researchers were studying these images and discovered something interesting: a narrow, bright streak of ultraviolet light, which appeared to be what scientists had hoped to find, a sprite. 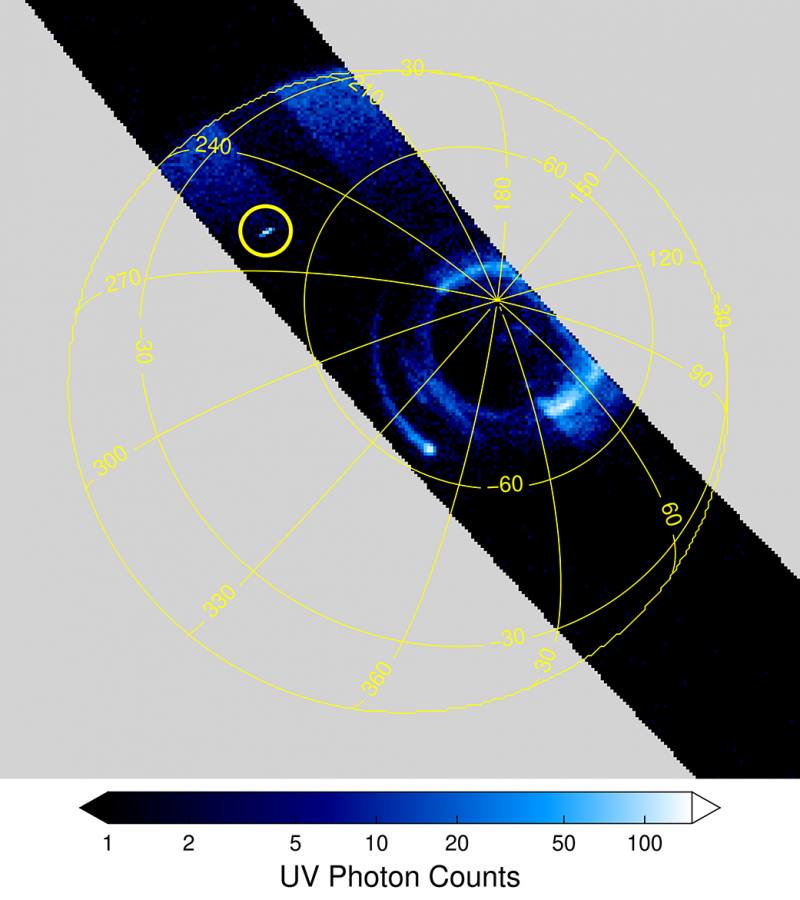 Bright flash near Jupiter’s south pole by Juno on April 10, 2020 (circled), thought to be either a sprite or elve. Image via NASA/ JPL-Caltech/ SwRI.

Rohini Giles, a Juno scientist at Southwest Research Institute (SwRI) and lead author of the new study, said in a statement:

UVS was designed to characterize Jupiter’s beautiful northern and southern lights. But we discovered UVS images that not only showed Jovian aurora, but also a bright flash of UV light over in the corner where it wasn’t supposed to be. The more our team looked into it, the more we realized Juno may have detected a TLE on Jupiter.

In the process of putting together those images, we noticed that very occasionally we saw these surprising, short-lived, bright flashes. We then went and searched through all of the data that we’ve taken over four years of the mission and we found a total of 11 flashes all with very similar properties.

Since this is still an initial detection, scientists don’t yet know how common sprites are on Jupiter. But finding the first one is an exciting discovery. Sprites had been predicted on Jupiter by several previous studies, but this is the first direct evidence of them. 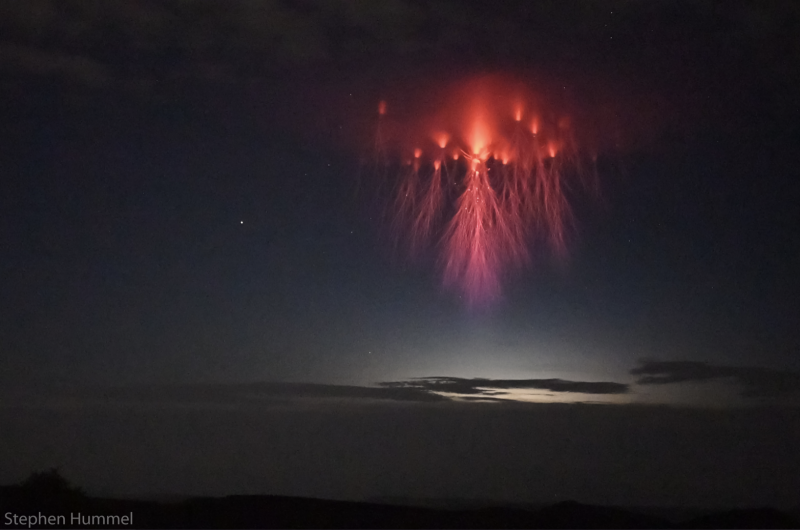 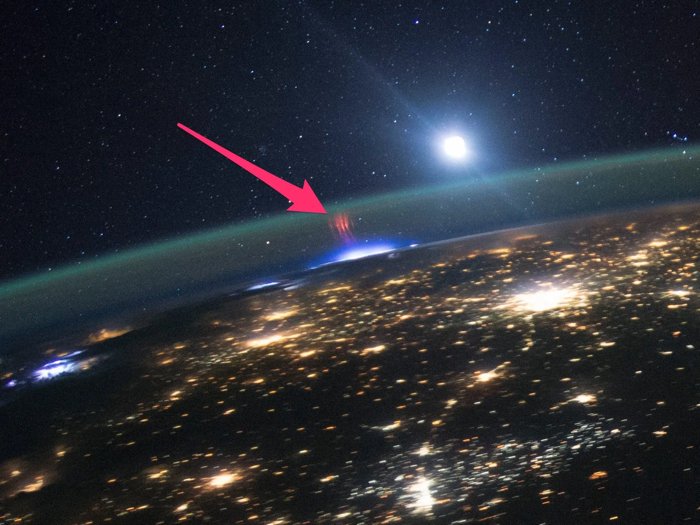 Red sprites above a thunderstorm over the U.S., as seen by astronauts on the International Space Station in 2015. Image via NASA/ ScienceAlert. 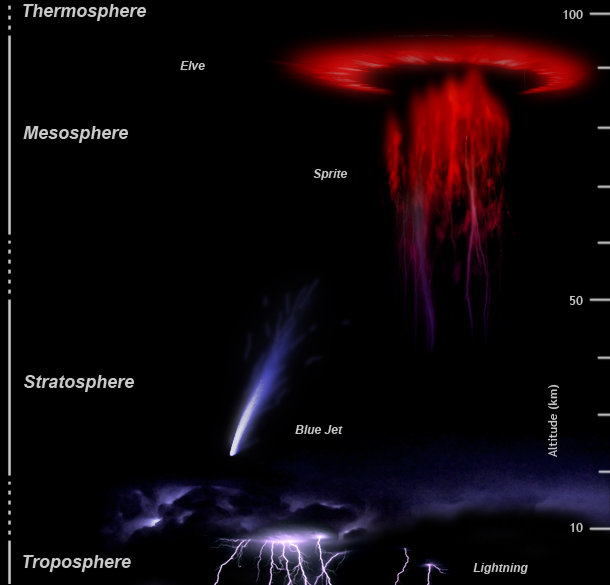 Different types of electrical phenomena in Earth’s atmosphere, including sprites and elves. Image via Abestrobi.

The sprites detected by Juno were found in a region where lightning is also known to occur. The Juno scientists determined that these new flashes were not regular lightning because they were found 186 miles (300 km) above the altitude where the majority of Jupiter’s lightning occurs, above the water-cloud layer in the atmosphere. The flashes were also dominated by hydrogen emissions, unlike other lightning on the planet.

Sprites on Earth are rather bizarre-looking, sort of like a jellyfish with a central diffuse halo and long tentacles descending downward. They tend to occur up to 60 miles (97 km) above thunderstorms, and only last a few milliseconds, quicker than the blink of an eye, which explains why they had been rarely seen until pilots started reporting them. There weren’t even any good photographs of them until 1989, when experimental physicist John R. Winckler (1916-2001) captured one while testing a low-light television camera. Nowadays, you can find many photographs of them, such as on SpaceWeather.com.

Sprites on Earth are typically reddish, but may be different colors on Jupiter. Giles said: 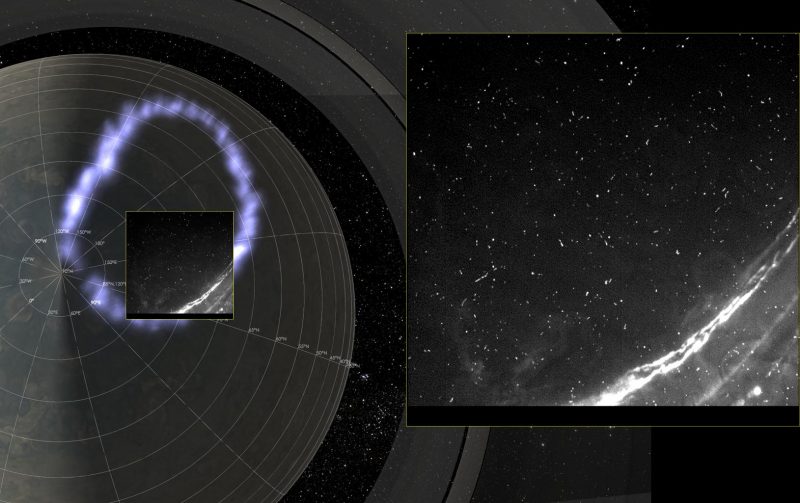 Lightning has also been seen on Jupiter by Juno such as this flash (bright dot in lower right corner of inset) on May 24, 2018. The colorful oval is an aurora near the north pole. Image via NASA/ JPL-Caltech/ SwRI.

From the ground, sprites may not look all that big, but they can be about 30 miles (50 km) across. Matthew Cappucci of the Washington Post’s Capital Weather Gang said last year:

Imagine one electrical discharge spanning the distance from Baltimore to Washington, D.C.

Juno has also previously observed lightning on Jupiter. The discovery of both lightning and sprites highlights how Jupiter’s atmosphere is similar to Earth’s in some ways, at least visually. It is, however, much deeper and more turbulent, with long-lived storms that dwarf any ever seen on our planet, and is composed mostly of hydrogen and helium.

Lightning strikes on Jupiter are also more powerful, although less frequent. Most are seen in the Jovian belts and near the westward jet streams. Some lightning flashes have also been seen at Jupiter’s poles, making it the only other planet besides Earth so far where polar lightning has been observed. As with thunderstorms on Earth, Jupiter’s lightning is closely associated with its massive storms. 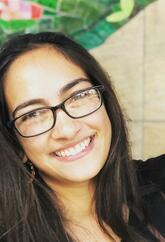 These first detections of sprites or elves on Jupiter are exciting, and now scientists will continue to look for more of them, as Giles noted:

We’re continuing to look for more telltale signs of elves and sprites every time Juno does a science pass. Now that we know what we are looking for, it will be easier to find them at Jupiter and on other planets. And comparing sprites and elves from Jupiter with those here on Earth will help us better understand electrical activity in planetary atmospheres.

Bottom line: Sprites and elves, electrical phenomena above thunderstorms on Earth, have now been detected on Jupiter for the first time.