SpaceX launched 60 more of its Starlink satellites on January 20, 2021. SpaceX ultimately intends to launch tens of thousands of these satellites, to provide global internet access. Here’s why astronomers are concerned. 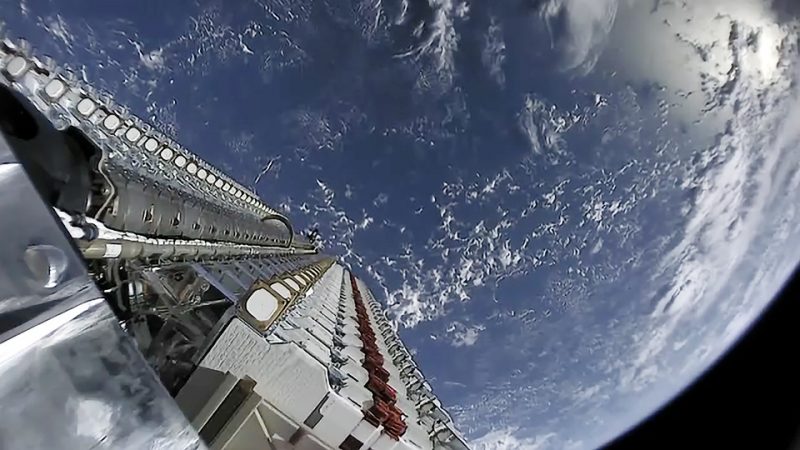 A batch of 60 Starlink test satellites stacked atop a Falcon 9 rocket, close to being placed in orbit May 24, 2019. Image via SpaceX/ Wikimedia Commons.

SpaceX launched another 60 Starlink internet satellites into orbit on Wednesday (January 20, 2021). The SpaceX workhorse rocket – a Falcon 9 rocket – lifted off as scheduled from Pad 39A at NASA’s Kennedy Space Center at 8:02 a.m. EDT (12:02 UTC). The launch had been delayed for two days due to poor weather in the recovery zone and pre-flight checking issues. The Falcon 9 first stage returned to Earth nine minutes after lift-off, to achieve a picture-perfect landing on the SpaceX droneship Just Read the Instructions. It was the eighth successful launch and landing of this booster rocket.

Falcon 9 launches Starlink to orbit – the eighth launch and landing of this booster pic.twitter.com/zyj8ZdDFql

This launch, called Starlink 17, is to be the first of many Starlink launches in 2021, as SpaceX moves toward its goal of placing tens of thousands of these satellites in orbit with the intention of providing global high-speed broadband internet access. Last year was a historic year for SpaceX, including two different astronaut missions to the International Space Station, the first for a commercial company. 2020 was also SpaceX’s busiest launch year to date, achieving a record 26 flights and smashing the previous record of 18 set in 2018. SpaceX plans to launch 40 rockets between its West and East Coast launch sites following Starlink 17 this year.

Recovery efforts for the Falcon 9’s first stage began about 45 minutes after liftoff. SpaceX’s main drone ship, named Of Course I Still Love You, is currently undergoing maintenance; its backup ship called Just Read the Instructions was waiting in the Atlantic Ocean for the stage, where landed.

The successful landing marked the 72nd recovery of a first stage booster for the California-based rocket manufacturer.

SpaceX was also expected to continue its tradition of recovering the Falcon 9’s payload fairing, or nose cone, on this flight. As it falls back to Earth in two pieces, two net-equipped boats – called GO Ms. Tree and GO Ms. Chief – wait nearby and prepare to snag the fairings. And while both pieces are outfitted with software that helps them aim for the recovery zone, the following process is not always the same. If they land in the outstretched nets of GO Ms. Tree and GO Ms. Chief, they can safely be hauled away. But if they make a gentle parachute-landing in the open water, the boats will scoop the fairings up out of the ocean. Making a midair catch is difficult and dependent upon several factors, like weather and winds, so it’s avoided. The decision between making a net-catch or scoop-catch is typically made the day of launch. 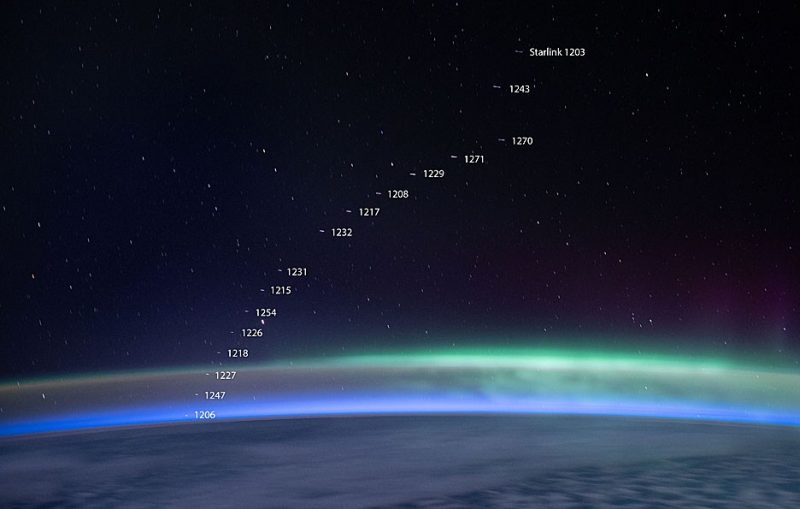 Astronauts in the International Space Station photographed the southern lights and a train of 16 Starlink satellites (each with a unique ID number) on April 13, 2020 over the Southern Ocean off the coast of Antarctica. Image via ISS/ NASA. Also see this video.

Starlink controversy within the astronomy community. Despite the promise of global internet access, both professional and amateur astronomers are fearful that the SpaceX Starlink satellites – which can be glimpsed as “constellations” of moving “stars” – will disrupt observations of the night sky. The National Science Foundation and the American Astronomical Society released a report on the situation in August 2020, following discussions among more than 250 experts at the virtual Satellite Constellations 1 (SATCON1) workshop.

SpaceX recently outfitted some Starlink satellites with a blackened sunshade – called VisorSat – that the company hopes will reduce the satellites’ apparent brightness by reducing the amount of sunlight that’s reflected. That’s just one of six suggestions proposed by the SATCON1 team.

Initial efforts at mitigating the spacecraft’s impact involved launching a prototype Starlink satellite later dubbed DarkSat earlier in 2020, which featured a black antireflective coating. Recent ground-based observations of DarkSat in orbit found it half as bright as a standard Starlink satellite, which is a good improvement, according to experts, but still far from what astronomers say is needed. Jeremy Tregloan-Reed, a University of Antofagasta astronomer on the observational team that assessed the prototype, commented:

I would not consider DarkSat as a victory but instead a good step in the right direction.

The Federal Communications Commission has granted SpaceX permission to launch as many as 12,000 of the flat-panel broadband satellites, but the company has indicated that it intends to send up to 30,000. With those plans – as well as Amazon’s Project Kuiper aiming for 3,236 satellites and OneWeb, a now-bankrupt company recently acquired by the United Kingdom government, perhaps striving for 2,000 – the scale of astronomy’s satellite-constellation problem will only increase. 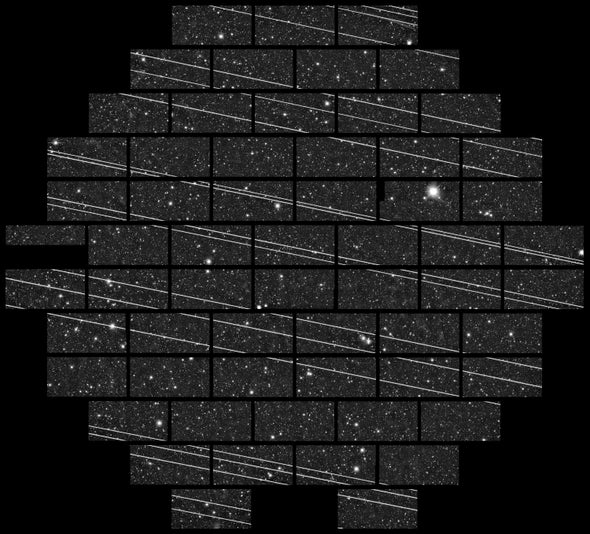 A time-lapse image shows the passage of a Starlink satellite cluster creating bright streaks through a telescope’s field of view at the Cerro Tololo Inter-American Observatory of Chile in November 2019. Image via CTIO/ NOIRLab/ NSF/ AURA and DECam DELVE Survey.

Today’s launch is expected to be the first of two SpaceX launches from Florida this month (SpaceX also successfully launched the Turksat 5A mission via its Falcon 9 on January 7). On January 22, a Falcon 9 rocket is expected to carry the Transporter 1 rideshare mission with dozens of tiny satellites for commercial and government customers, and SpaceX might even cap off the month with another Starlink mission, if not in early February.

Bottom line: The first 2021 launch of SpaceX Starlink satellites took place as scheduled on Wednesday, January 20, at 8:02 EST (12:02 UTC). SpaceX intends to launch tens of thousands of Starlink satellites, with lifespans of around five years, into low-Earth orbit. The goal is global internet access. Astronomers are concerned.

Read more from Space.com: SpaceX will launch its 1st Starlink satellites of 2021 on Wednesday