Solar physicists predict another weak 11-year solar cycle ahead. At the same time, they expect the coming cycle to break the trend of weakening solar activity seen over the past 4 cycles, and they add there’s “no indication we are currently approaching a Maunder-type minimum in solar activity.” 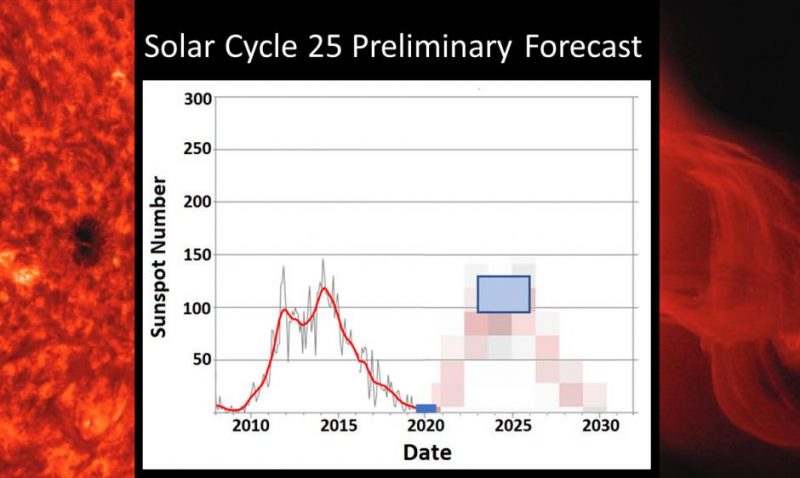 The current solar cycle has been relatively weak. The coming solar cycle is expected to be weak also, but not significantly weaker than the current cycle. Graph via NOAA’s Space Weather Prediction Center.

A NOAA/NASA co-chaired international panel – charged with forecasting the upcoming 11-year solar cycle, Solar Cycle 25 – released a preliminary forecast on April 5, 2019. The consensus is that Cycle 25 will be similar in size to the current cycle, Cycle 24; in other words, it’s likely to be weak. These solar experts said they expect solar minimum – the period when the sun is least active – no earlier than July 2019 and no later than September 2020. They expect sunspot maximum to occur no earlier than the year 2023 and no later than 2026, with a minimum peak sunspot number of 95 and a maximum of 130. That’s in contrast to the average number of sunspots, which typically ranges from 140 to 220 sunspots per solar cycle. The panel also said in a statement that it has:

… high confidence that the coming cycle should break the trend of weakening solar activity seen over the past four cycles.

We expect Solar Cycle 25 will be very similar to Cycle 24: another fairly weak cycle, preceded by a long, deep minimum. The expectation that Cycle 25 will be comparable in size to Cycle 24 means that the steady decline in solar cycle amplitude, seen from cycles 21-24, has come to an end and that there is no indication that we are currently approaching a Maunder-type minimum< in solar activity.

The Maunder minimum is a period of much-reduced sunspot activity observed between the years 1645 and 1715. It coincided with the coldest part of what’s commonly called the Little Ice Age (c. 1500–1850) in the Northern Hemisphere, when, according to historians:

… the Thames River in England froze over during winter, Viking settlers abandoned Greenland, and Norwegian farmers demanded that the Danish king recompense them for lands occupied by advancing glaciers.

No one understands exactly how or even if reduced sunspots cause cooler weather on Earth, but speculation abounds. The question of the sun-Earth connection will not be so pressing if – following Cycle 25 – solar activity returns to normal, as these solar physicists suggest it will. 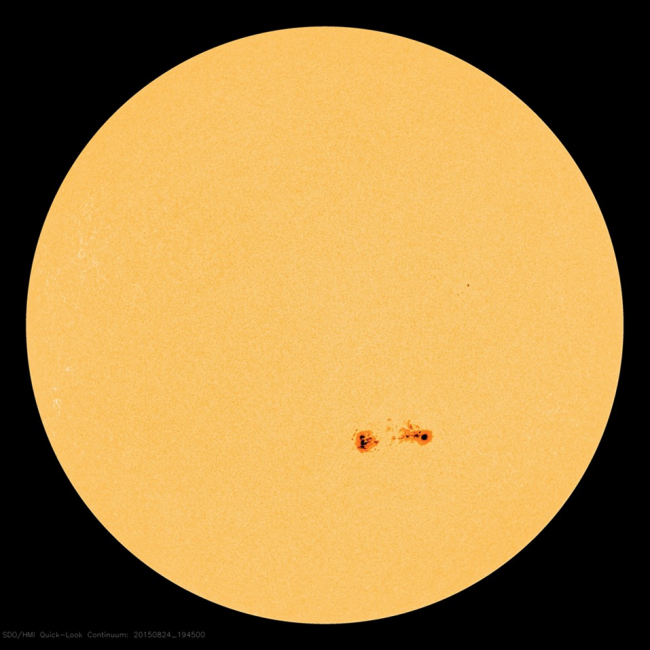 Solar Cycle 24 reached its maximum – the period when the sun is most active – in April 2014 with a peak average of 82 sunspots. This photo – taken on August 24, 2015, just over a year after the maximum – shows relatively few spots. Image via NASA/National Weather Service.

In the meantime, the solar cycle prediction also gives a rough idea of the frequency of space weather storms of all types, from radio blackouts to geomagnetic storms and solar radiation storms. Although Earth’s atmosphere protects us on Earth’s surface from the effects of space weather storms, our human technologies can be affected by particularly strong storms. The panel’s statement said that predictions for Cycle 25 will be:

… used by many industries to gauge the potential impact of space weather in the coming years. Space weather can affect power grids, critical military, airline, and shipping communications, satellites and Global Positioning System (GPS) signals, and can even threaten astronauts by exposure to harmful radiation doses.

The National Weather Service pointed out that space weather forecasting is a relatively new science:

While daily weather forecasts are the most widely used type of scientific information in the U.S., solar forecasting is relatively new. Given that the sun takes 11 years to complete one solar cycle, this is only the fourth time a solar cycle prediction has been issued by U.S. scientists. The first panel convened in 1989 for Cycle 22. 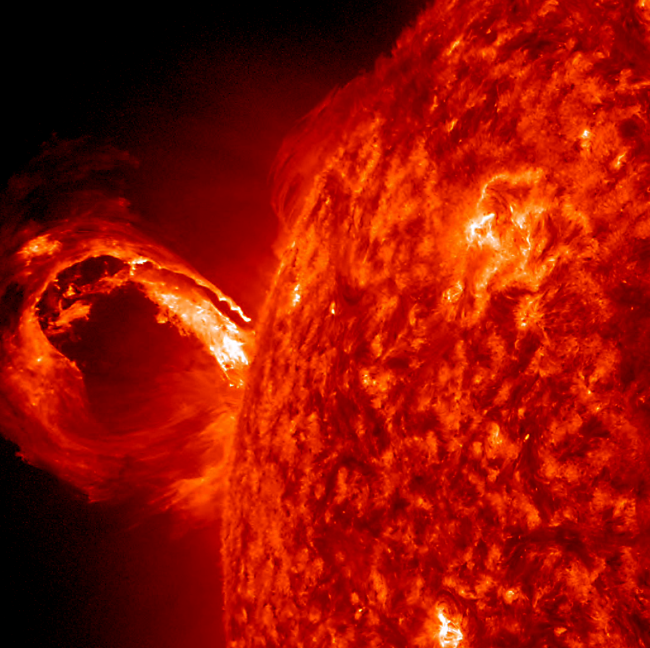 A powerful eruption from the sun’s surface on May 1, 2013. Image via NASA/National Weather Service.

Bottom line: Solar physicists predict the coming solar cycle will be weak, like the current cycle. But, they said: “… the steady decline in solar cycle amplitude, seen from cycles 21-24, has come to an end and … there is no indication that we are currently approaching a Maunder-type minimum in solar activity.”