This galaxy – nicknamed ‘little lion’ – contains the lowest level of heavy elements ever detected in a gravitationally bound system of stars. 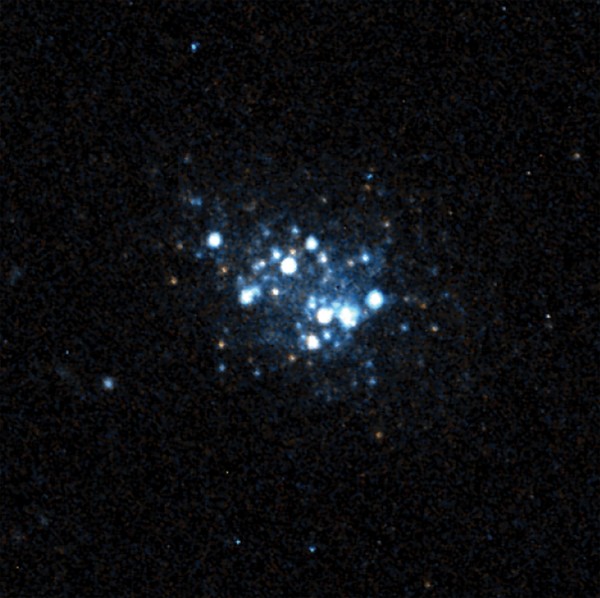 Most of the visible stuff of our universe – stars, galaxies, interstellar clouds – is in the form of hydrogen and helium. Astronomers use the word metals when speaking of all elements except hydrogen and helium. Astronomers at Indiana University at Bloomington say they’ve found the most metal-poor galaxy ever, a faint blue galaxy only 30 million light-years from Earth and located in the direction of what we see as the constellation Leo Minor. They published their study May 12, 2016, in the Astrophysical Journal and say this galaxy could provide new insights on the Big Bang.

This galaxy is labeled AGC 198691 but nicknamed Leoncino, or little lion. Astronomer John J. Salzer of Indiana University was co-author on the new study, which was led by graduate study Alec S. Hirschauer. Salzer said:

Finding the most metal-poor galaxy ever is exciting since it could help contribute to a quantitative test of the Big Bang. There are relatively few ways to explore conditions at the birth of the universe, but low-metal galaxies are among the most promising.

That’s because the current accepted model of of the Big Bang – the event astronomers believe gave birth to our universe – makes clear predictions about the amount of helium and hydrogen as the Bang happened. Low metal abundance is essentially a sign that very little stellar activity has taken place compared to most galaxies. In other words, the galaxy is relatively pristine. So the ratio of atoms in metal-poor galaxies provides a direct test of the current Big Bang model, these astronomers said in a May 12 statement. They said:

The elemental make-up of metal-poor galaxies is very close to that of the early universe.

To find these low-metal galaxies, however, [we] must look far from home. Our own Milky Way galaxy is a poor source of data due to the high level of heavier elements created over time by stellar processing, in which stars churn out heavier elements through nucleosynthesis and then distribute these atoms back into the galaxy when they explode as supernovae. 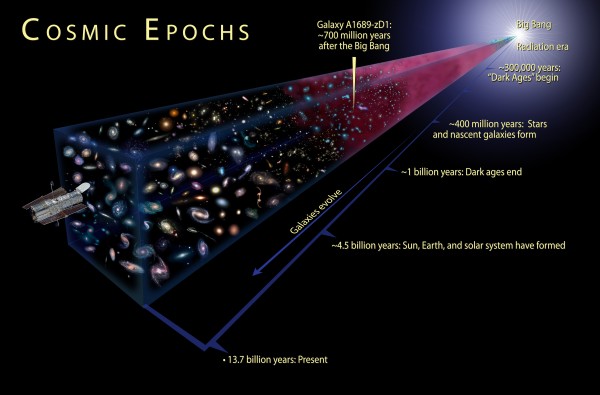 View larger. | This is an illustration showing the cosmic epochs of the Universe from the Big Bang to the present. Image via ESA.

Leoncino is considered a member of the local universe, a region of space within about a billion light years of Earth. This nearby region of space is estimated to contain several million galaxies, of which only a small portion have been cataloged. The astronomers said:

A galaxy previously recognized to possess the lowest metal abundance was identified in 2005; however, Leoncino has an estimated 29 percent lower metal abundance.

Aside from low levels of heavier elements, Leoncino is unique in several other ways. A so-called dwarf galaxy, it’s only about 1,000 light-years in diameter and composed of several million stars. The Milky Way, by comparison, contains an estimated 200 billion to 400 billion stars. Leoncino is also blue in color, due to the presence of recently formed hot stars, but it’s surprisingly dim, the astronomers said, with the lowest luminosity level ever observed in a system of its type. Salter said:

We’re eager to continue to explore this mysterious galaxy. Low-metal-abundance galaxies are extremely rare, so we want to learn everything we can. 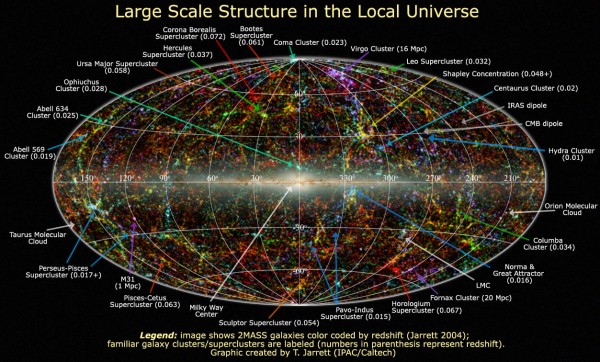 Bottom line: AGC 198691 – nicknamed Leoncino, or little lion – contains the lowest level of heavy elements – that’s all elements besides hydrogen or helium – ever detected in gravitationally bound system of stars. Astronomers say it should provide tests of the currently accepted model of the Big Bang.