Mission control confirmed end of operations at 3:40 p.m. EDT (1934 UTC), when no signal was detected by NASA’s Deep Space Network station at Goldstone.

Mission control confirmed end of operations just a few minutes later, at 3:40 p.m., when no signal was detected by NASA’s Deep Space Network (DSN) station in Goldstone, California, at the time the spacecraft would have emerged from behind the planet. This conclusion was independently confirmed by the DSN’s Radio Science team, which also was monitoring for a signal from MESSENGER. John Grunsfeld, associate administrator for NASA’s Science Mission Directorate in Washington, said:

Going out with a bang as it impacts the surface of Mercury, we are celebrating MESSENGER as more than a successful mission. The MESSENGER mission will continue to provide scientists with a bonanza of new results as we begin the next phase of this mission–analyzing the exciting data already in the archives, and unravelling the mysteries of Mercury.

Read more about the end of the mission from NASA 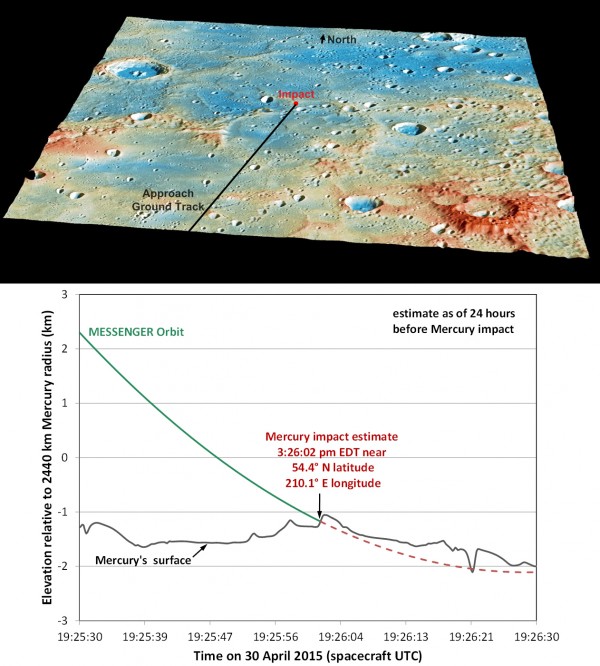 ORIGINAL ARTICLE BEGINS HERE: With no way to make major adjustments to its orbit around the planet Mercury, NASA’s robotic MESSENGER spacecraft will crash into the surface Mercury – moving at more than 8,750 miles per hour (3.91 kilometers per second). The crash is anticipated for April 30, 2015 in the afternoon according to U.S. clocks (early evening in Europe and Africa; Friday morning for Asia). The impact will add a new crater to the planet’s scarred face that engineers estimate will be as wide as 52 feet (16 meters). MESSENGER has orbited and studied the planet Mercury since 2011. The crash will end its extended mission, which has revealed unprecedented new information about the surface of our sun’s innermost planet.

The periherm – MESSENGER’s closest point to Mercury – at 19:26 UTC should result in impact. Deep Space Network on Earth will continue to track Mercury until 19:56 UTC to confirm that MESSENGER has impacted and is no more. If impact doesn’t occur, then the following periherm at 03:47 UTC on Friday, May 1, 2015 certainly will cause it, and the Deep Space Network will continue to track for 30 minutes more to confirm impact.

MESSENGER will have completed 4,105 orbits around Mercury since arriving in hermcentric (Mercury-centered) orbit on March 18, 2011.

On Wednesday, April 29, 2015, gravitational tides from the sun caused MESSENGER’s periherm – or closest point to Mercury in orbit – to descend to only 1.2 miles (2 km). 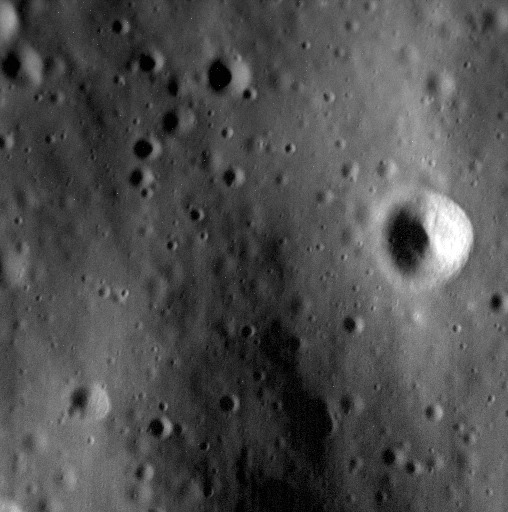 As MESSENGER has come ever-nearer Mercury, preparing to crash, it acquired this image – one of the highest-resolution images of Mercury ever – on April 23. This area is only 560 meters / 1,870 feet wide, within the Shakespeare Quadrangle in Mercury’s Northern Hemisphere, near where Mercury is expected to crash into a cliff on April 30. Image via NASA / JHU / APL MESSENGER spacecraft.

1. Meteors with the same mass as MESSENGER (513 kg) slam into Mercury about every month or two, and typically with 10 times the speed and 100 times the energy. The planet doesn’t have a thick atmosphere that would slow down objects headed for the surface.

3. At almost 9,000 mph, the craft will be traveling three times faster than a speeding bullet and nearly twelve times the speed of sound.

4. On MESSENGER’s last orbit, it will pass just 900 to 1,800 feet over the planet’s surface. We have buildings that tall on Earth.

5. The crater the craft will leave near Mercury’s north pole is predicted to be about 50 feet wide. That’s the width of an NBA basketball court.

6. Nearly 55 percent of MESSENGER’s weight at launch was fuel – which is about to run out.

The MESSENGER (MErcury Surface, Space ENvironment, GEochemistry, and Ranging) spacecraft was launched on August 3, 2004. It embarked on an odyssey of nearly seven years and more than eight billion kilometers that included 15 trips around the sun, along with several gravity-induced speed boost flybys of Earth, Venus, and Mercury itself. It finally slipped into orbit around Mercury on March 18, 2011, the first mission to ever do so.

The mission plan called for MESSENGER to spend one Earth year at Mercury, but when early findings raised new questions, NASA granted two mission extensions for a total of three additional years. Mission engineers also found ways to save fuel, such as maneuvering the spacecraft with a technique called solar sailing, which allowed an extra month of operations in orbit. 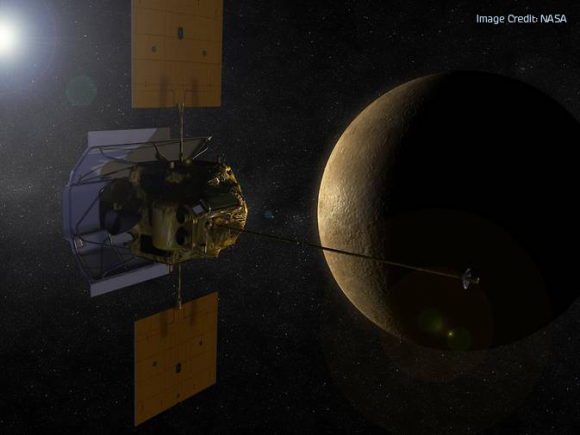 MESSENGER will have completed 4,105 orbits around Mercury since arriving in orbit on March 18, 2011. Image via NASA

Bottom line: NASA’s robotic MESSENGER spacecraft, which has orbited and studied the planet Mercury since 2011, ended its extended mission as it ran out of fuel and crashed into the planet on Thursday, April 30, 2015.