NASA is testing a 3D-printed prototype of unusual mini robots that can roll, fly, float and swim, then morph into a single machine. They’re called Shapeshifters. The team envisions them as a way to explore Saturn’s moons.

Shapeshifting has been an enduring device throughout literature, and we see shapeshifting everywhere in modern science fiction, for example, the shapeshifting android assassin in the Terminator movies. Even my 6-year-old grandson – who loves to spend an afternoon building with Legos – knows about shapeshifting robots. And now NASA engineers have gone into shapeshifting robots in a big way … for real. According a September 25, 2019, statement from NASA, a robotics team is testing a 3D-printed prototype of an unusual mini-robot at NASA’s Jet Propulsion Laboratory in Pasadena, California. The robot can roll, fly, float and swim, then morph into a single machine. NASA is calling this series of robots Shapeshifters. 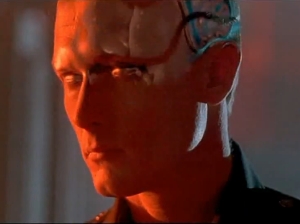 No, not this guy. This is the T-1000 shapeshifter, a fictional character in the Terminator franchise. Image via Wikipedia.

Robotics technologist Ali Agha – who leads the Shapeshifter program for JPL – envisions Shapeshifter as a mission to Saturn’s largest moon Titan, the only other world in the solar system known to have liquid in the form of methane lakes, rivers and seas on its surface. NASA said Shapeshifter is:

… a developing concept for a transformational vehicle to explore treacherous, distant worlds.

A contraption that looks like a drone encased in an elongated hamster wheel rolls across the yard, then splits in half. Once separated, the two halves rise on small propellers, effectively becoming flying drones for aerial exploration. These 3D-printed parts are only the beginning; the team imagines a series of up to 12 robots that could transform into a swimming probe or a team of cave explorers.

Okay, maybe it sounds cooler than the actual prototype looks, for now. But NASA engineers are just starting down the path of shapeshifting robots, and who knows what the future will bring? In the meantime, here’s what the prototype looks like: 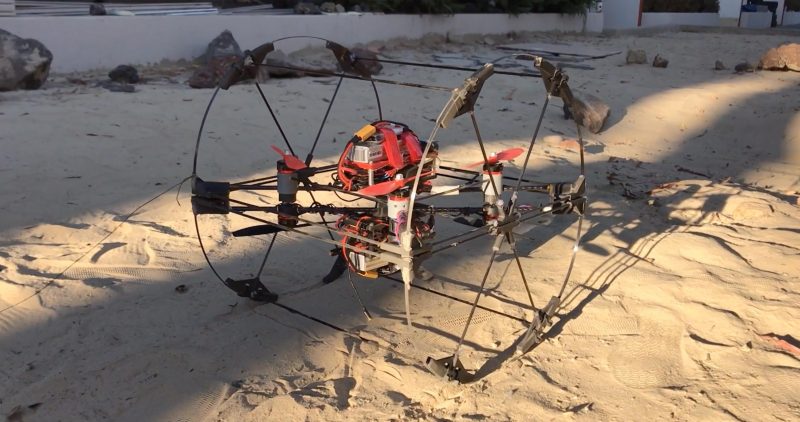 A prototype of the transforming robot Shapeshifter is tested in the robotics yard at NASA’s Jet Propulsion Laboratory. Shapeshifter is made of smaller robots that can morph into rolling spheres, flying drones, swimming submersibles and more. This flying amphibious robot is part of the early-stage research program NASA Innovative Advanced Concepts (NIAC), which offers several phases of funding to visionary concepts. NASA says the program “helps turn ideas that sound like science fiction into science fact.” Image via NASA/JPL-Caltech.

NASA’s most recent mission to Saturn and its moons was the Cassini mission, which began orbiting Saturn in 2004 and ended with a dramatic plunge into Saturn’s clouds in 2017. Cassini spent 13 years orbiting Saturn, flying different pathways among its moons. It flew by Titan over 100 times, with the goal, NASA said, of mapping its surface for future missions. Cassini found that Titan is similar to Earth but – because it’s so much farther from the sun, in a colder part of the solar system – Titan has key differences. It has cold rivers, lakes and rain made up of liquid methane and ethane, both of which exist on Earth in gaseous form. NASA said the moon’s hazy atmosphere could also conceal caves or icy volcanoes that spew ammonia or water instead of magma. Agha explained in the NASA statement why shapeshifting robots would be so useful there:

We have very limited information about the composition of the surface. Rocky terrain, methane lakes, cryovolcanoes – we potentially have all of these, but we don’t know for certain.

So we thought about how to create a system that is versatile and capable of traversing different types of terrain but also compact enough to launch on a rocket.

Agha and his Shapeshifter co-investigators, who include researchers from Stanford and Cornell universities, came up with the concept of a self-assembling robot made of smaller robots called ‘cobots.’ The cobots, each housing a small propeller, would be able to move independent of one another to fly along cliffsides of scientific interest. They could also go spelunking, forming a daisy chain to maintain contact with the surface. Or they could transform into a sphere to roll on flat surfaces and conserve energy.

For now, Shapeshifter is semi-autonomous, but its future design will depend on cobots that can auto-assemble without needing commands from Earth.

Agha’s ultimate vision includes a lander like the European Space Agency’s Huygens Probe, which touched down on Titan after being deployed via parachute by NASA’s Cassini spacecraft. This ‘mothercraft,’ as Agha calls it, would serve as an energy source for the cobots and carry the scientific instruments to perform in-depth sample analysis. But rather than staying in place, as landers usually do, this one would be portable. Flight is easier on Titan, where the atmosphere is dense and gravity is low. Agha calculates that 10 cobots could easily lift a lander the size of Huygens (roughly 9 feet, or 3 meters, wide) and gently carry it to different locations.

Jason Hofgartner is JPL’s lead scientist for Shapeshifter. He said:

It is often the case that some of the hardest places to get to are the most scientifically interesting because maybe they’re the youngest, or they’re in an area that was not well characterized from orbit.

Shapeshifter’s remarkable versatility enables access to all of these scientifically compelling places.

The next mission to Titan will be Dragonfly, NASA’s first rotorcraft lander, which is scheduled to launch in 2026. Shapeshifter won’t be aboard. It’s too new and too undeveloped. The next step for the Shapeshifter team is to submit its concept to NIAC’s Phase II selection process in 2020. After that, there are many more years of development ahead.

Still, the concept is a compelling one. And people like my grandson might be around long enough to see some amazing solar system exploration, using real Shapeshifters. 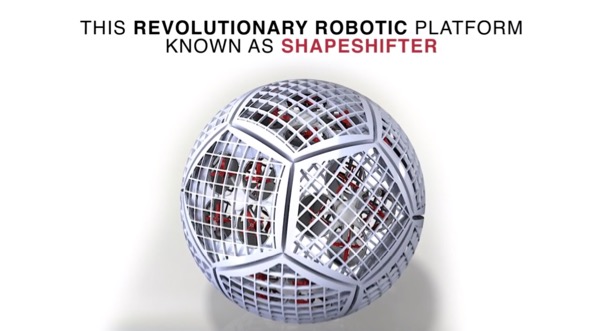 Artist’s concept of proposed design for future Shapeshifter robot, which would consist of many robots in one.

Bottom line: NASA is testing a 3D-printed prototype of unusual mini robots that can roll, fly, float and swim, then morph into a single machine. They’re called Shapeshifters. The team envisions them as a way to explore Saturn’s moons.