Series of small bumps might have knocked Uranus sideways

Conventional wisdom said a single blow caused Uranus to lie sideways in the plane of the solar system. But maybe the cause was several small bumps instead.

An international team of scientists has used simulations of planetary formation and collisions to show that, early in its life, the planet Uranus suffered at least two small punches that knocked it into its current orientation – sideways with respect to the plane of the solar system.

Alessandro Morbidelli of the Observatoire de la Cote d’Azur in Nice, France, led the team and presented this research on October 6, 2011, at a meeting of planetary astronomers in Nantes, France. 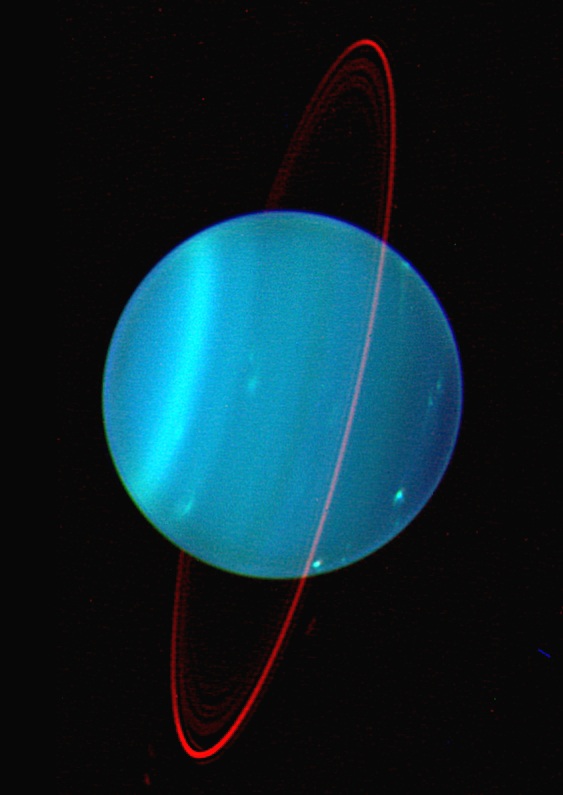 Composite image of the planet Uranus and its moons by the Keck Telescope at infrared wavelenths. Uranus and its moons lie nearly sideways in the plane of the solar system, in contrast to the other planets. Image Credit: Lawrence Sromovsky, (Uniersity of Wisconsin-Madison), Keck Observatory

Most of the planets in our solar system spin nearly upright with respect to the plane of their orbits around the sun. Earth, for example, has its spin axis tilted from upright by only about 23.5 degrees. The largest planet, Jupiter, is tilted by only three degrees. Uranus – seventh planet outward from the sun – is different. Its spin axis is tilted by 98 degrees.

Astronomers know that the early solar system was filled with flying debris. The evidence can be seen in the multitude of craters on bodies that have no atmosphere (and therefore no eroding weather) such as Earth’s moon. It is natural to assume that Uranus was knocked on its side by a single large impact, but this new research suggests otherwise. 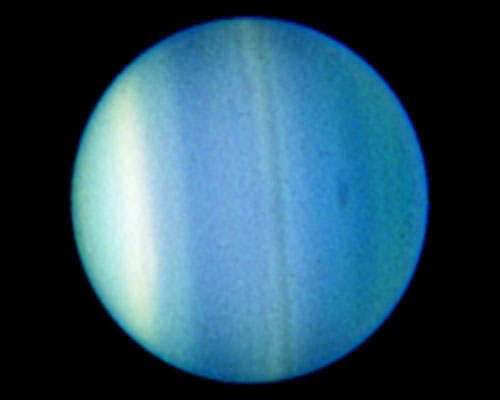 The Hubble Space Telescope took this picture of Uranus in 2006. The planet’s south pole is on the left in this picture. At the time this image was obtained, there was a bright hood of methane clouds over the Uranian south pole. Image Credt: NASA, ESA, L. Sromovsky and P. Fry (University of Wisconsin), H. Hammel (Space Science Institute), and K. Rages (SETI Institute).

The generally accepted theory is that in the past a body a few times more massive than the Earth collided with Uranus, knocking the planet on its side. There is, however, a flaw in this scenario. That is, if there had been a single collision to cause Uranus’ tilt, the moons of Uranus should have been left orbiting at their original angles with respect to the planet. That is not the case. The orbits of the moons of Uranus – like the planet itself – lie at almost exactly 98 degrees to the plane of the solar system.

Morbidelli and his team used simulations to figure out the most likely cause of Uranus’ tilt. That is, they used computers to display various impact scenarios until they found one that made sense.

The simulation that made the most sense was surprising. It indicated that if Uranus was not tilted during a single collision, as is commonly thought, but rather was bumped in at least two smaller collisions, then there is a much higher probability of seeing the moons’ orbits as we observe.

The Voyager 2 spacecraft captured this image of a crescent Uranus on January 25, 1986. This is Voyager’s final image of Uranus, before it left the planet behind and set forth on the cruise to Neptune. Voyager was 1 million kilometers (about 600,000 miles) from Uranus when it acquired this wide-angle view. Note that Uranus retains its pale blue-green color seen by ground-based astronomers and recorded by Voyager during its historic encounter. Image Credit: NASA

This research has important ramifications on our theories of giant planet formation, these astronomers say. Current theories may need adjustment. Morbidelli said:

The standard planet formation theory assumes that Uranus, Neptune and the cores of Jupiter and Saturn formed by accreting only small objects in the protoplanetary disk. They should have suffered no giant collisions. The fact that Uranus was hit at least twice suggests that significant impacts were typical in the formation of giant planets. So, the standard theory has to be revised.

Bottom line: A team led by Alessandro Morbidelli has determined that at least two small bumps – instead of one large bump – might have knocked the planet Uranus into its current orientation sideways with respect to the plane of the solar system. These astronomers presented their results at the joint meeting of the European Planetary Science Congress (EPSC) and the Division of Planetary Sciences (DPS – a U.S. body of astronomers), held October 2-7, 2011, in France.