Join astronomers in examining the fate of G2, which has survived its encounter with the supermassive black hole at the heart of the Milky Way. 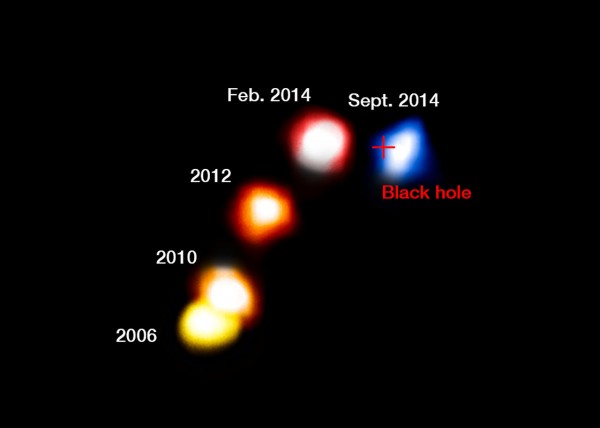 Here is what the European Southern Observatory (ESO) is calling the best view yet of G2, the intrepid cloud of dust that survived its passage near our Milky Way’s central supermassive black hole in mid-2014. The image comes from ESO’s Very Large Telescope and also shows that G2 appears not to have been significantly stretched, or elongated, by the black hole’s powerful gravity, as was first believed.

This cloud near the center of our galaxy – G2 – has been watched by astronomers since 2011. It was thought at first to have several times Earth’s mass, but is, perhaps, more massive. At first, the cloud seemed to be accelerating fast towards the supermassive black hole at the center of our Milky Way. The great tidal forces in this region of very strong gravity were expected to tear the cloud apart and disperse it along its orbit. Indeed, at first, the cloud was thought to be undergoing spaghettification – sometimes called the noodle effect – stretching and elongating as it neared the black hole.

Astronomers thought at least part of G2 would enter the black hole. They expected to see sudden flaring and other evidence of the hole swallowing the cloud. That’s why astronomers from around the world, using some of the world’s largest telescopes, have very carefully observed this region of space over the last few years.

The black hole did not swallow G2 … darn! Still, the results are fascinating, and now a team led by Andreas Eckart (University of Cologne, Germany) says that images of infrared light from glowing hydrogen in the cloud show that G2 was compact both before and after its closest approach, as it swung around the black hole.

Before closest approach, the cloud was found to be traveling away from the Earth at about 10 million kilometers per hour (6 million miles per hour). It did appear to swing around the hole, which sped it up, much as spacecraft traveling in our solar system are sometimes sped up via gravity assists from one planet or another. After rounding the black hole, the astronomers could see the cloud had changed its trajectory, was now approaching the Earth, and was moving faster at about 12 million kilometers per hour.

Plus, the new observations did not show evidence of the stretching, or elongating – noodle-izing – thought to have been previously observed.

In fact, said the astronomers, the cloud looks pretty stable. They spoke of its resilience, and said the evidence now strongly suggests that the cloud surrounds a dense object with a massive core, rather than being a free-floating cloud.

We looked at all the recent data and in particular the period in 2014 when the closest approach to the black hole took place. We cannot confirm any significant stretching of the source. It certainly does not behave like a coreless dust cloud. We think it must be a dust-shrouded young star. 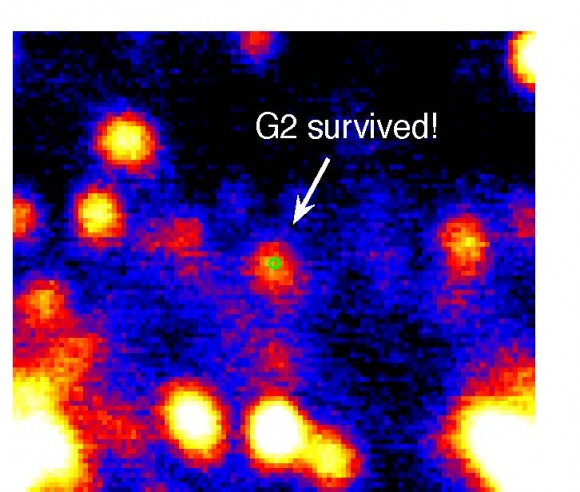 An image from W. M. Keck Observatory near infrared data shows that G2 survived its closest approach to the black hole in northern summer 2014. The green circle just to its right depicts the location of the invisible supermassive black hole. Image via Keck Observatory

Bottom line: In 2011, astronomers discovered a dusty cloud thought to be on a course to enter the Milky Way’s central supermassive black hole. It did not enter the hole and has now rounded the hole safely. Astronomers believe the cloud’s resilience to the powerful gravitational forces in the black hole’s vicinity indicate it is not a free-floating cloud but rather, possibly, a dust-shrouded young star.