It’ll come closest to the black hole will be in 2013. Astronomers see the cloud being stretched – astronomers say “spaghettified” – into an elongated shape.

Astronomers using ESO’s Very Large Telescope announced last week (December 14, 2011) that they have discovered a cloud of gas – with several times the mass of the Earth – accelerating fast towards the supermassive black hole at the center of our Milky Way. As long predicted, the cloud is being observed to undergo spaghettification – sometimes called the noodle effect. In other words, it’s being stretched or elongated as it approaches the black hole. It will pass closest to the Milky Way’s black hole in 2013.

Astronomers say this is the first time ever they’ve been able to witness a doomed cloud of gas hurtling toward a supermassive black hole. The results will be published in the 5 January 2012 issue of the journal Nature.

During a 20-year program using ESO telescopes to monitor the movement of stars around the supermassive black hole at the center of our galaxy, a team of astronomers led by Reinhard Genzel at the Max-Planck Institute for Extraterrestrial Physics (MPE) in Germany made the discovery.

Over the last seven years, the speed of this object has nearly doubled, reaching more than 8 million kilometers/hour. The cloud of gas is on a very elongated orbit. In mid-2013, it will pass at a distance of only about 40 billion kilometers from the event horizon of the black hole – the boundary around the hole from which no light can escape – a distance of about 36 light-hours. This is an extremely close encounter with a supermassive black hole in astronomical terms. 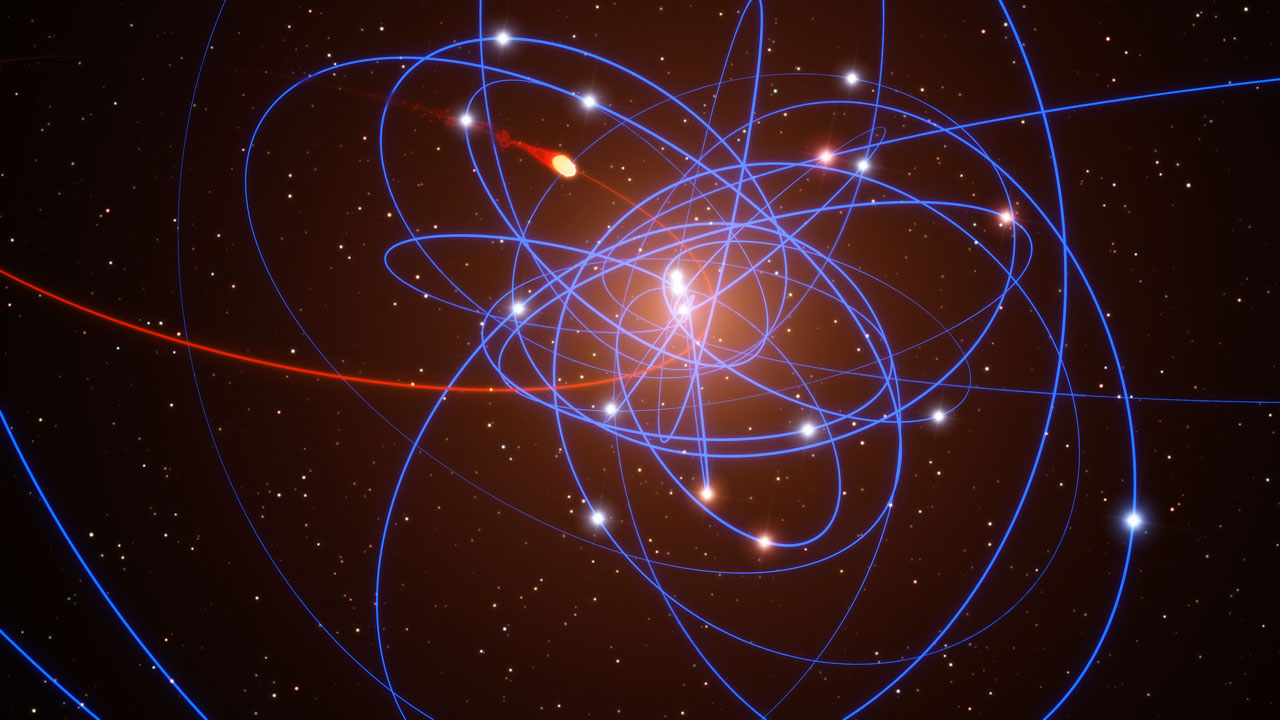 The gas cloud is much cooler than the surrounding stars (only about 280 degrees Celsius), and is composed mostly of hydrogen and helium. It is a dusty, ionized gas cloud with a mass roughly three times that of the Earth. The cloud is glowing under the strong ultraviolet radiation from the hot stars around it in the crowded heart of the Milky Way.

The current density of the cloud is much higher than the hot gas surrounding the black hole. But as the cloud gets ever closer to the black hole, increasing external pressure will compress the cloud. At the same time the huge gravitational pull from the black hole, which has a mass four million times that of our sun, will continue to accelerate the inward motion and stretch the cloud out along its orbit. Stefan Gillessen (MPE), lead author of the paper, said:

The idea of an astronaut close to a black hole being stretched out to resemble spaghetti is familiar from science fiction. But we can now see this happening for real to the newly discovered cloud. It is not going to survive the experience.

The cloud’s edges are already starting to shred and disrupt and it is expected to break up completely over the next few years. The astronomers can already see clear signs of increasing disruption of the cloud over the period between 2008 and 2011.

The material is also expected to get much hotter as it nears the black hole in 2013 and it will probably start to give off X-rays. There is currently little material close to the black hole so the newly-arrived gas cloud will be the dominant fuel for the black hole over the next few years.

The next two years will be very interesting and should provide us with extremely valuable information on the behavior of matter around such remarkable massive objects.

Bottom line: Astronomers in Germany have spotted a cloud of gas accelerating toward the supermassive black hole at the center of our Milky Way. As long predicted, the cloud is being observed to undergo spaghettification – sometimes called the noodle effect. In other words, it’s being stretched or elongated as it approaches the black hole. It will pass closest to it in 2013.