Scientists have now identified some exoplanets that might have suitable temperatures for liquid water and enough UV light for the chemistry thought to have led to life on Earth. 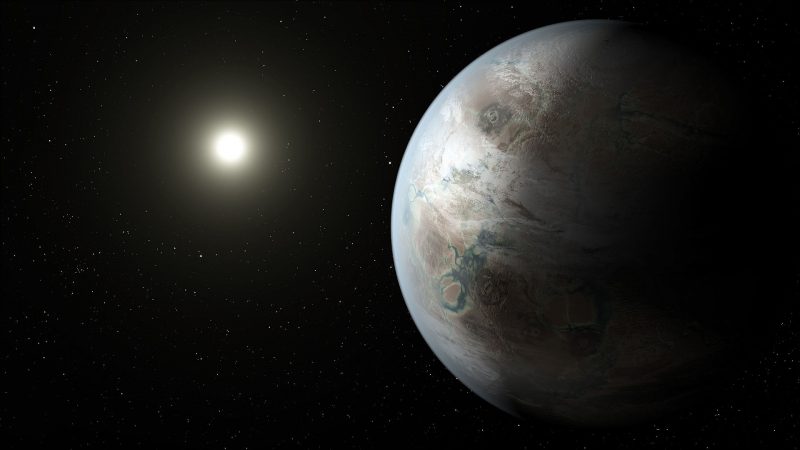 Artist’s concept of Kepler 452b, one of the exoplanets in the new study. Image via NASA Ames/JPL-Caltech/T. Pyle.

Thousands of exoplanets are now being discovered – there are 3,815 confirmed as of August 1, 2018 – but how many of them have the right conditions to life?

The data so far shows that the most common planets are super-Earths (larger than Earth but smaller than Uranus or Neptune) and smaller ones, more like Earth. Some of those are in their stars’ habitable zones, where temperatures could allow liquid water to exist. But habitability depends on a range of factors, including temperature, available water, composition, stable climate, etc. Now, scientists have identified a group of exoplanets which have the same chemical conditions thought to have led to life on Earth. The findings were announced on August 1, 2018, by the University of Cambridge.

The new study, by researchers from the University of Cambridge and the Medical Research Council Laboratory of Molecular Biology (MRC LMB), has been published in the peer-reviewed journal Science Advances. and suggests that stars with enough ultraviolet (UV) light could help life to start on any habitable planets in the same way it likely developed on Earth. UV light is known to power chemical reactions that can produce the building blocks of life. According to Paul Rimmer, a postdoctoral researcher with a joint affiliation at Cambridge’s Cavendish Laboratory and the MRC LMB, and the paper’s first author:

This work allows us to narrow down the best places to search for life. It brings us just a little bit closer to addressing the question of whether we are alone in the universe. 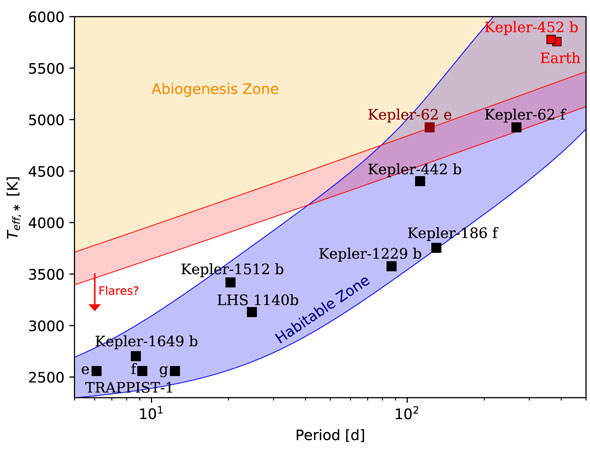 Some of the identified exoplanets in the new study, in the habitable zones of their stars, which could have conditions suitable for the emergence of life similar to how it is thought to have occurred on Earth. Image via Paul Rimmer.

The planets identified so far have stars with sufficient UV light and also lie within the habitable zones of their stars. This does not guarantee life exists on any of them, but it means they are good candidates, at least until more is known about them. If conditions on any of them are or were similar to those on the early Earth, then the chances are greater that life could have started.

The new paper brings together the fields of organic chemistry and exoplanet research, building on the work of John Sutherland, who studies the chemical origin of life on Earth and is a co-author on the new paper.

Sutherland is known for another paper, published in 2015, which argued that cyanide was a necessary ingredient in the primordial soup from which all life on Earth is thought to have originated. That may seem counterintuitive, but his hypothesis suggested that carbon from meteorites interacted with nitrogen in the atmosphere to form hydrogen cyanide. The hydrogen cyanide then rained to the surface, where it interacted with other elements, powered by the UV light from the sun. According to Sutherland, it was the chemicals produced from these interactions that generated the building blocks of RNA, a close relative of DNA, which most biologists believe was the first molecule of life to carry the chemical information necessary for life. Sutherland’s research group was able to recreate the chemical reactions under UV lamps, generating the precursors to lipids, amino acids and nucleotides, all essential parts of living cells. As Rimmer explained:

I came across these earlier experiments, and as an astronomer, my first question is always what kind of light are you using, which as chemists they hadn’t really thought about. I started out measuring the number of photons emitted by their lamps, and then realized that comparing this light to the light of different stars was a straightforward next step. 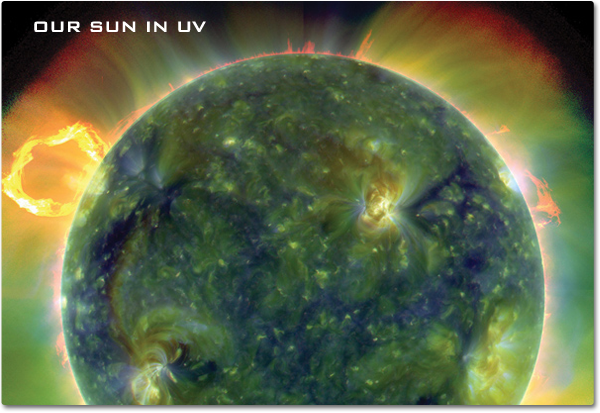 The sun as viewed in ultraviolet (UV) light. Research shows that UV was necessary to help life first develop on the early Earth. Image via NASA/SDO/AIA.

The next step was to compare those results to the UV light emitted by different types of stars. Interestingly, it was found that stars about the same temperature as our sun produced enough UV light for the building blocks to form, while cooler stars did not, unless those stars also had active, strong solar flares. Red dwarfs, the most common type of star, are cooler, but can have intense solar flares. While those can be deadly to any existing or developing life, it seems they may also be helpful however in helping life to get started. The most ideal planets are ones with both liquid water and enough incoming UV light from their stars to activate the necessary chemistry. As Rimmer noted:

I’m not sure how contingent life is, but given that we only have one example so far, it makes sense to look for places that are most like us. There’s an important distinction between what is necessary and what is sufficient. The building blocks are necessary, but they may not be sufficient: it’s possible you could mix them for billions of years and nothing happens. But you want to at least look at the places where the necessary things exist. 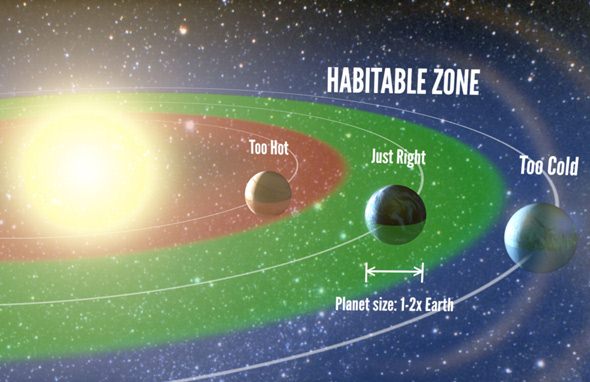 The habitable zone is the region around a star where temperatures could allow liquid water on the surface of a rocky planet like Earth. Other factors, such as the UV light from a star, also play a role in determining a planet’s habitability, however. Image via Petigura/UC Berkeley, Howard/UH-Manoa, Marcy/UC Berkeley.

As Sutherland also pointed out, there are now estimated to be trillions of potentially habitable terrestrial (rocky) planets in the universe:

Getting some idea of what fraction have been, or might be, primed for life fascinates me. Of course, being primed for life is not everything and we still don’t know how likely the origin of life is, even given favorable circumstances – if it’s really unlikely then we might be alone, but if not, we may have company.

Several of the planets identified in the study were discovered by the Kepler Space Telescope, including Kepler 452b, about 1,400 light-years away, which has become known as “Earth’s cousin.” It is estimated to have a mass five times that of Earth, is likely to be rocky, and orbits within its sun-like star’s habitable zone. It is considered to be one of the most potentially habitable exoplanets, although one study this year claims it is still a candidate planet and not confirmed yet apart from Kepler. It is also unfortunately too far away for current telescopes to analyze its atmosphere in the search for possible biomarkers.

Rimmer has also written an article for The Conversation detailing the research team’s work on this new study.

Bottom line: Out of thousands of exoplanets discovered so far, scientists have identified some which might have ideal conditions, with the right temperatures and enough UV light, for life to take hold in a way similar to how it is thought to have done on the early Earth.

Source: The origin of RNA precursors on exoplanets