Here’s how Titan looks in infrared

Saturn’s largest moon Titan is enveloped in a thick atmosphere, but the infrared camera on the Cassini spacecraft was able to reveal the moon’s myriad of surface features. 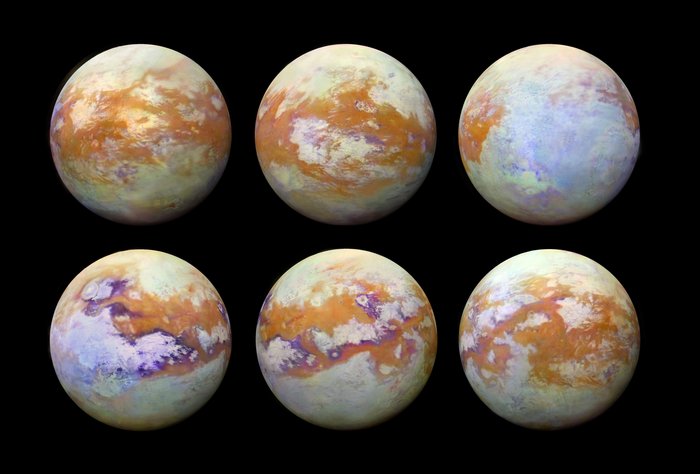 In these images of Saturn’s moon Titan, the colors reflect variations in materials on the moon’s surface. For example, the moon’s equatorial dune fields appear a consistent brown color, while bluish and purple hues may indicate materials enriched in water ice. Image via NASA/JPL-Caltech/University of Nantes/University of Arizona.

This stunning sequence of images of Saturn’s largest moon Titan was created using data acquired by the Cassini mission’s infrared camera, which peered through Titan’s dense atmosphere. The images were stitched together in a seamless mosaic to provide the best yet representation of Titan’s surface features.

Thanks to Cassini and the European Space Agency’s (ESA) Huygens probe it carried – which landed on Titan in January 2005 – Titan was extensively mapped and analyzed. On September 15, 2017, the Cassini spacecraft plunged into the planet Saturn, becoming part of the planet it had been orbiting since 2004.

The Cassini-Huygens mission – the fourth earthly space probe ever to visit Saturn and first to enter its orbit – revolutionized the way we think about Saturn and its moons and rings. It also gave us spectacular, awesome images that just kept coming, all the way to the mission’s final days. Visit a Cassini image gallery.

Here’s a cool video from NASA summarizing the amazing findings that Cassini has made at Titan. Titan is a world that in some ways reminds us of Earth, yet is also utterly alien.