A new topographic map of Titan, plus a new study showing that Titan’s seas lie at an average elevation – a sea level – just as Earth’s do.

Two new studies from Cornell University in Ithaca, New York show, once again, similarities between Earth and Saturn’s moon Titan. The first is a new global topographic map of Titan. The second, which builds on the first, shows that the liquid lakes and seas on Titan follow a constant elevation relative to Titan’s gravitational pull. In other words, just as Earth’s oceans lie at an average elevation that we call sea level, so do Titan’s seas.

Both studies are based on data from the Cassini spacecraft, which orbited Saturn – occasionally making close flybys of its large moon Titan – from 2004 to 2017. Both are published (here and here) in the peer-reviewed journal Geophysical Research Letters.

Paul Corlies is first author on the topography study, which resulted in an end-of-mission map of Titan via Cassini. The map revealed several new features on Titan, including new mountains, none higher than about 2,300 feet (700 meters). Corlies said:

The main point of the work was to create a map for use by the scientific community.

And he said that, within 30 minutes of the data set being available online, he began to receive inquiries on how to use it.

New map, part of the Titan “end of mission” topography study. Only about 9 percent of Titan was observed by Cassini in a way that resulted in relatively high-resolution topography, with with another 25-30 percent of the topography imaged in lower resolution. The rest was constructed via interpolation, that is, via a method of constructing new data points within the range of a discrete set of known data points. Click here for more of the study’s maps.

One of the early uses of the new topographic work came from Corlies’ professor at Cornell, Alex Hayes. His study shows that Titan’s seas follow a constant elevation relative to Titan’s gravitational pull — just as Earth’s oceans do.

A statement from NASA said:

This is the latest finding that shows remarkable similarities between Earth and Titan, the only other world we know of in our solar system that has stable liquid on its surface. The twist at Titan is that its lakes and seas are filled with hydrocarbons rather than liquid water, and water ice overlain by a layer of solid organic material serves as the bedrock surrounding these lakes and seas.

… Smaller lakes on Titan, it turns out, appear at elevations several hundred feet, or meters, higher than Titan’s sea level. Lakes at high elevation are commonly found on Earth. The highest lake navigable by large ships, Lake Titicaca, is over 12,000 feet [3,700 meters] above sea level.

The new study suggests that elevation is important because Titan’s liquid bodies appear to be connected under the surface in something akin to an aquifer system at Earth. Hydrocarbons appear to be flowing underneath Titan’s surface similar to the way water flows through underground porous rock or gravel on Earth, so that nearby lakes communicate with each other and share a common liquid level. 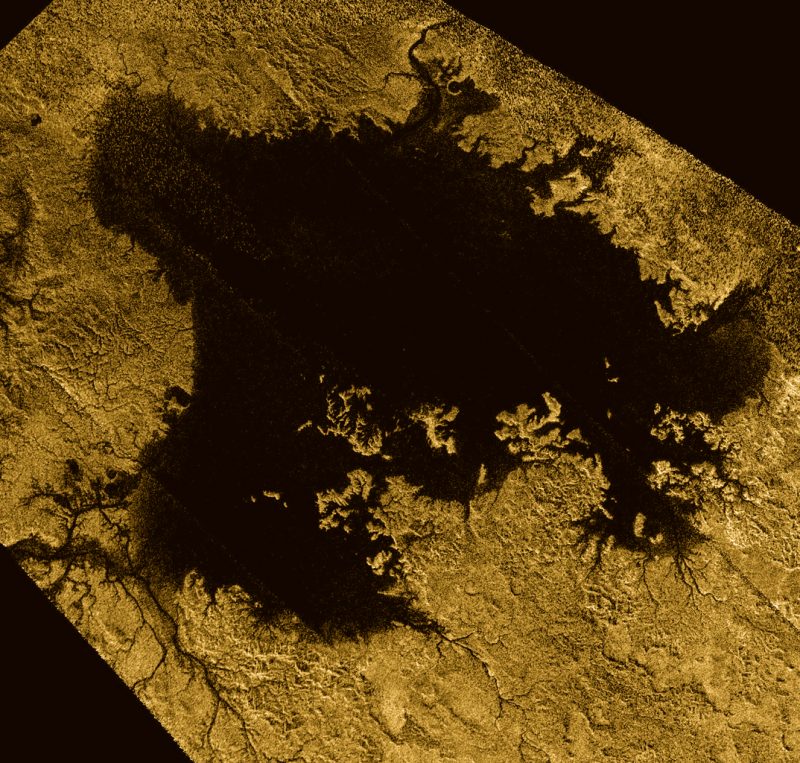 Titan’s Ligeia Mare, shown in here in data obtained by the Cassini spacecraft, is the second-largest known body of liquid on Saturn’s moon Titan. It’s filled with liquid hydrocarbons, such as ethane and methane, and is one of the many seas and lakes around Titan’s north polar region. Image via NASA JPL-Caltech/ ASI/ Cornell.

Bottom line: Scientists at Cornell have conducted two new studies of Saturn’s moon Titan. Both use Cassini spacecraft data. The Cassini mission ended with a plunge by the spacecraft into Saturn in September 2017. One study resulted in end-of-mission topographic maps. The other showed that Titan’s hydrocarbon-filled liquid lakes and seas maintain a constant “sea level.”

Source: Titan’s Topography and Shape at the End of the Cassini Mission

Source: Topographic Constraints on the Evolution and Connectivity of Titan’s Lacustrine Basins

Via NASA JPL and Cornell