Astronomers have found 20 new moons orbiting Saturn, bringing the planet’s total number of moons to 82. That surpasses Jupiter, which has 79.

On Monday (October 7, 2019), the International Astronomical Union’s Minor Planet Center announced the discovery of 20 new moons orbiting Saturn, bringing the planet’s total number of moons to 82. That surpasses Jupiter, which has 79, and makes Saturn the planet with the most known moons in our solar system.

Scientists discovered the new moons using the Subaru telescope atop Mauna Kea in Hawaii. Scott Sheppard of Carnegie Institution for Science led the discovery team. He said in a statement:

Using some of the largest telescopes in the world, we are now completing the inventory of small moons around the giant planets. They play a crucial role in helping us determine how our solar system’s planets formed and evolved. 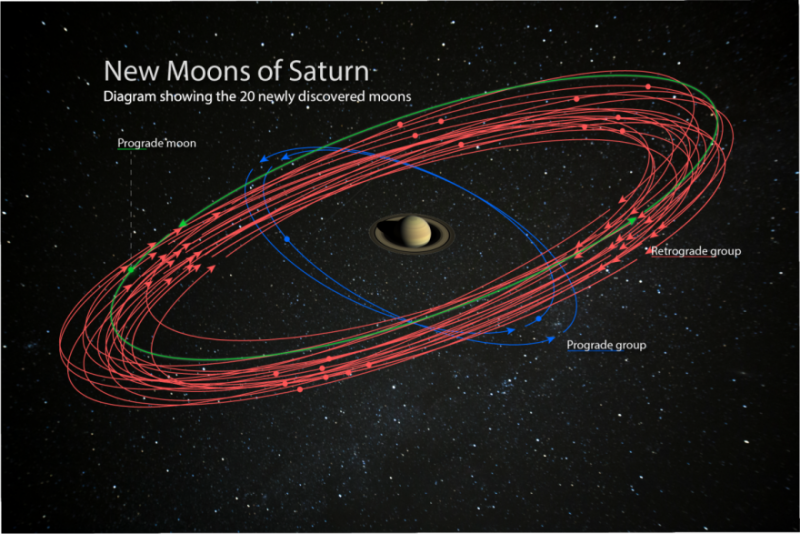 An artist’s concept of the 20 newly discovered moons orbiting Saturn. These discoveries bring the planet’s total moon count to 82, surpassing Jupiter for the most in our solar system. Image via the Carnegie Institution for Science. (Saturn image is courtesy of NASA/JPL-Caltech/Space Science Institute. Starry background courtesy of Paolo Sartorio/Shutterstock.)

The other three moons orbit in the same direction as Saturn rotates. Two of these three moons are closer to the planet and take about two years to travel once around Saturn. The third, and the more-distant retrograde moons, each take more than three years to complete an orbit.

The outer moons of Saturn appear to be grouped into three different clusters, according to how they orbit the planet. The newly discovered retrograde moons appear to belong to a group of moons, named after Norse mythology, thought to be fragments of a much bigger parent moon that was smashed to pieces in the solar system’s violent past. Sheppard said:

This kind of grouping of outer moons is also seen around Jupiter, indicating violent collisions occurred between moons in the Saturnian system or with outside objects such as passing asteroids or comets.

In the solar system’s youth, the sun was surrounded by a rotating disk of gas and dust from which the planets were born. It is believed that a similar gas-and-dust disk surrounded Saturn during its formation. The fact that these newly discovered moons were able to continue orbiting Saturn after their parent moons broke apart indicates that these collisions occurred after the planet-formation process was mostly complete and the disks were no longer a factor.

The Carnegie Institution for Sciences is hosting a contest to come up with names for the newly discovered moons. The moons must be named after giants from Norse, Gallic, or Inuit mythology. Contest details are here. Here’s a video about the contest:

Via the Carnegie Institution for Science