What happened in Russia on Friday, February 15?

As yet, no meteorite fragment has been collected from the February 15, 2013 violent airburst explosion over Chelyabinsk, Russia.

NASA scientists announced on February 15 that the the trajectory of the meteor that exploded in the air above Russia earlier that day was “significantly different” than the trajectory of asteroid 2012 DA14, which also passed close to Earth on February 15. In other words, the Russian meteor, although also considered an asteroid before it entered Earth’s atmosphere, was not related to asteroid 2012 DA14. Dr. Richard Binzel of M.I.T. told the New York Times that the Russian object started out “about the size of an SUV.” Meanwhile, Bill Cooke, lead for the Meteoroid Environments Office at NASA’s Marshall Space Flight Center, said his initial estimates indicate that the Russian object might have been larger, about 15 meters (50 feet) in diameter, with a weight of 7,000 metric tons. Cooke said it hit the atmosphere at a shallow angle of about 20 degrees, at a speed of about 65,000 km/h (40,000 mph).

According to a NASA statement, issued late in the day on February 15:

Information is still being collected about the Russian meteorite and analysis is preliminary at this point. In videos of the meteor, it is seen to pass from left to right in front of the rising sun, which means it was traveling from north to south. Asteroid DA14’s trajectory is in the opposite direction, from south to north.

UniverseToday reported that the Russian meteor traveled through Earth’s atmosphere for about 30 seconds before breaking apart and producing violent airburst explosion about 12-15 miles (20-14 kilometers) above Earth’s surface. The energy shockwave produced was equivalent to a 300-kilotons explosion. That energy propagated down through the atmosphere, struck the city and region of Chelyabinsk (population 1 million).

Read more from Universe Today about the Russian meteor 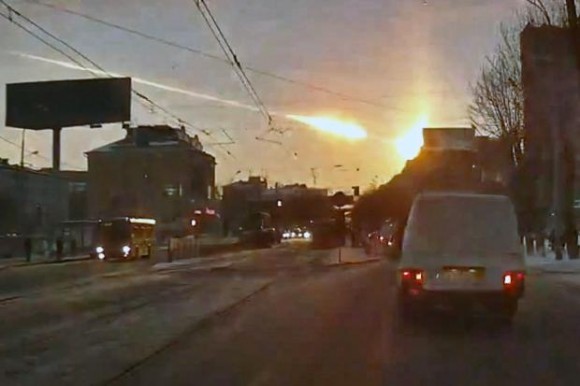 Dashboard camera captures the bright fireball that appeared over Russia this morning – February 15, 2013 – shortly before the meteorite struck.