Record-setting blast of gamma rays from a dying star

A shockingly, eye-wateringly bright gamma ray burst from a galaxy 3.6 billion light-years away.

NASA said late in the day yesterday (May 3, 2013) that a record-setting blast of gamma rays from a dying star in a distant galaxy has wowed astronomers around the world. The eruption is a gamma-ray burst (GRB), one of the universe’s most luminous explosions, thought to take place when supernovae erupt in distant galaxies. This particular GRB is designated GRB 130427A. On April 27, NASA said, it produced the highest-energy light ever detected from a gamma ray burst.

The animation above shows how the sky looks at gamma-ray energies above 100 million electron volts (MeV) with a view centered on the north galactic pole. The first frame shows the sky during a three-hour interval prior to GRB 130427A. The second frame shows a three-hour interval starting 2.5 hours before the burst, and ending 30 minutes into the event. In other words, the animation demonstrates how bright the burst was relative to the rest of the gamma-ray sky. Julie McEnery, project scientist for the Fermi Gamma-ray Space Telescope, which observed the event, said:

We have waited a long time for a gamma-ray burst this shockingly, eye-wateringly bright. The GRB lasted so long that a record number of telescopes on the ground were able to catch it while space-based observations were still ongoing. 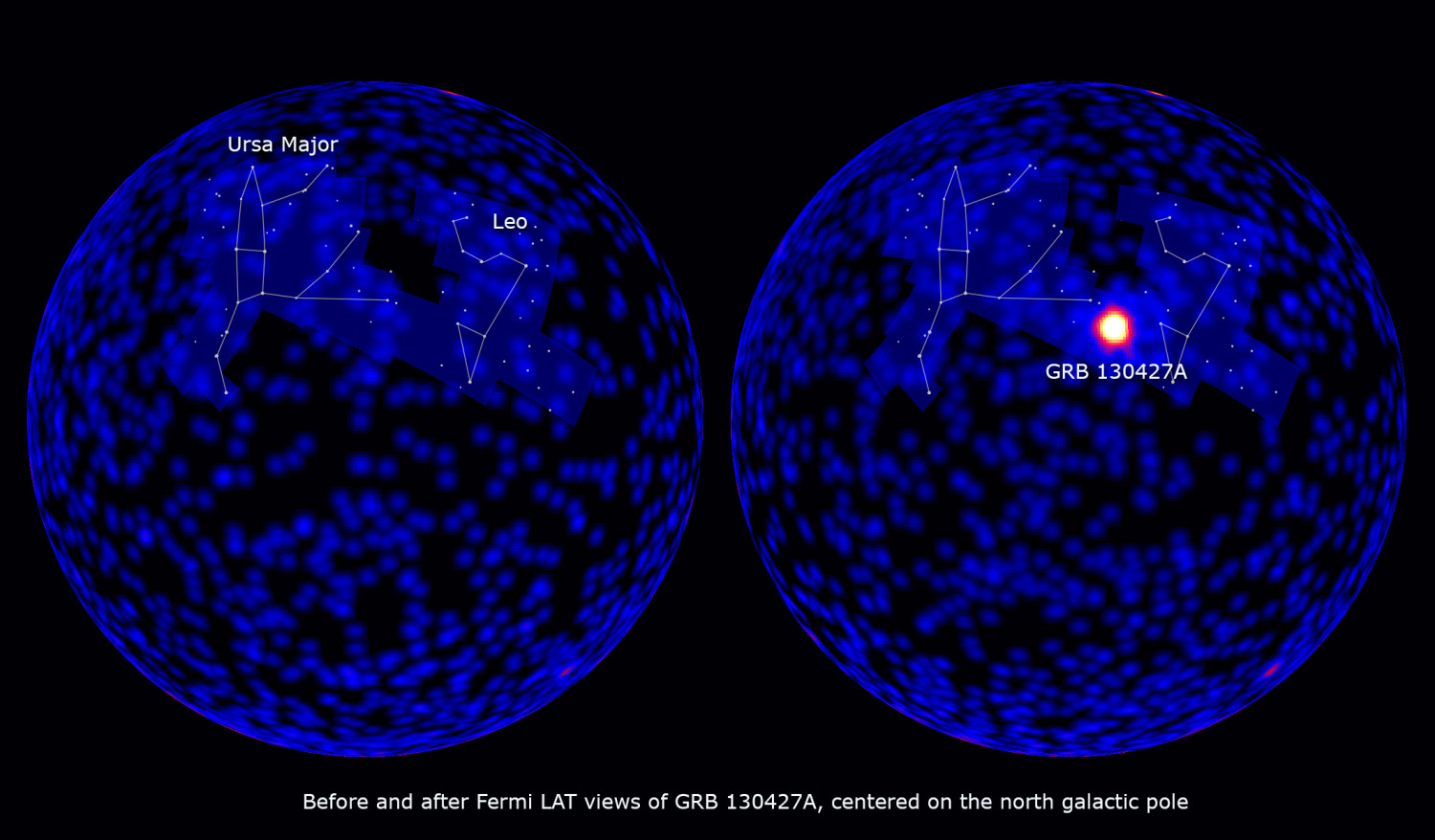 The burst subsequently was detected in optical, infrared and radio wavelengths by ground-based observatories. Astronomers quickly learned that the GRB was located about 3.6 billion light-years away, a distant that, for these sorts of events, is relatively close. NASA said:

Astronomers think most [gamma rays bursts] occur when massive stars run out of nuclear fuel and collapse under their own weight. As the core collapses into a black hole, jets of material shoot outward at nearly the speed of light.

The jets bore all the way through the collapsing star and continue into space, where they interact with gas previously shed by the star and generate bright afterglows that fade with time.

If the GRB is near enough, astronomers usually discover a supernova at the site a week or so after the outburst.

This GRB is in the closest 5 percent of bursts, so the big push now is to find an emerging supernova, which accompanies nearly all long GRBs at this distance. 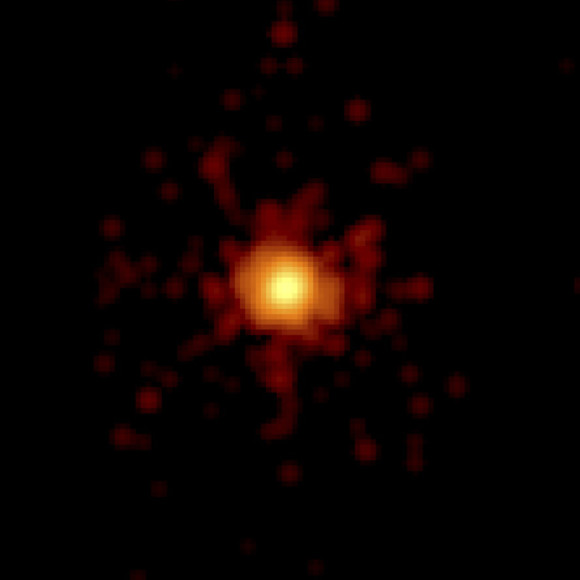 Swift’s X-Ray Telescope took this 0.1-second exposure of GRB 130427A at 3:50 a.m. EDT on April 27, just moments after Swift and Fermi triggered on the outburst. The image is 6.5 arcminutes across. Image via NASA/Swift/Stefan Immler

Bottom line: NASA announced on May 3, 2013 that a gamma ray burst (GRB) with the highest-energy light ever detected from an object of its kind was detected on April 27. They designated the burst GRB 130427A. They are now waiting to see if, as typically happens, a supernova appears in its location.