Astronomers using the Hubble Telescope found that the region around a quasar’s black hole pushes out material at a few percent the speed of light. These quasar tsunamis wreak havoc on the galaxies in which the quasars live. 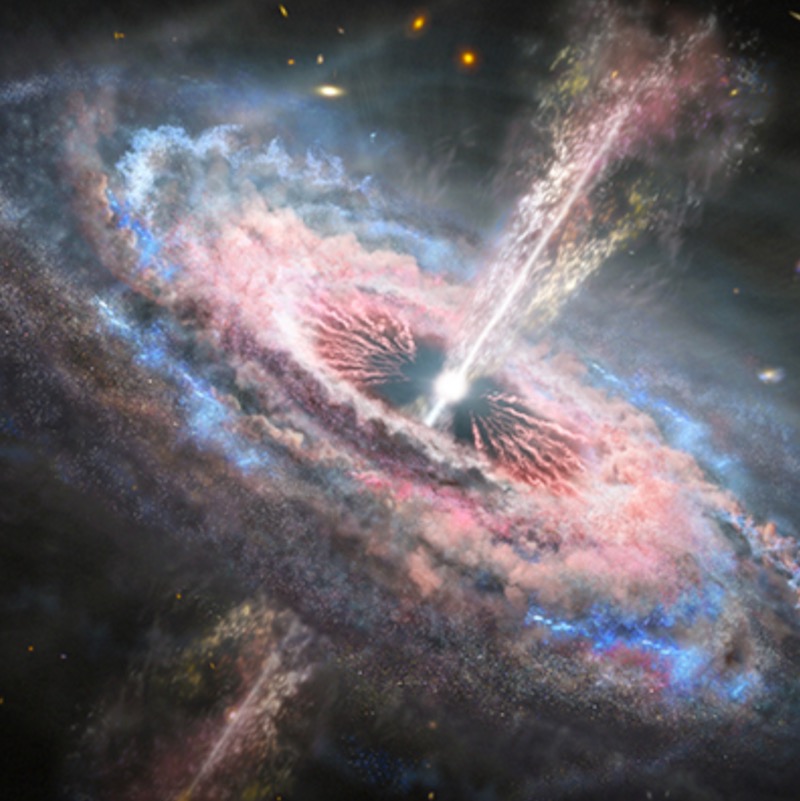 Artist’s concept of a distant quasar. They’re thought to have supermassive black holes at their cores; they generate energy via infalling matter. Using the Hubble Space Telescope, astronomers have discovered that radiation pressure from a supermassive black hole pushes material away from its galaxy’s center at a fraction of the speed of light. The quasar winds are propelling hundreds of times our sun’s mass outward every year, affecting the whole galaxy as the material snowplows into surrounding gas and dust. Image via NASA/ ESA/ J. Olmsted/ HubbleSite.

A series of six papers published in March 2020 in the peer-reviewed Astrophysical Journal Supplements outlines this new research. Ann Jenkins and Ray Villard, both of HubbleSite, explain.

Using the Hubble Space Telescope, a team of astronomers has discovered the most energetic outflows ever witnessed in the universe. They emanate from quasars and tear across interstellar space like tsunamis, wreaking havoc on the galaxies in which the quasars live.

As the black hole devours matter, hot gas encircles it and emits intense radiation, creating the quasar. Winds, driven by blistering radiation pressure from the vicinity of the black hole, push material away from the galaxy’s center. These outflows accelerate to breathtaking velocities that are a few percent of the speed of light. Principal investigator Nahum Arav of Virginia Tech in Blacksburg, Virginia, said:

No other phenomenon carries more mechanical energy. Over the lifetime of 10 million years, these outflows produce a million times more energy than a gamma-ray burst. The winds are pushing hundreds of solar masses of material each year. The amount of mechanical energy that these outflows carry is up to several hundreds of times higher than the luminosity of the entire Milky Way galaxy.

The quasar winds snowplow across the galaxy’s disk. Material that otherwise would have formed new stars is violently swept from the galaxy, causing star birth to cease. Radiation pushes the gas and dust to far greater distances than scientists previously thought, creating a galaxy-wide event.

As this cosmic tsunami slams into interstellar material, the temperature at the shock front spikes to billions of degrees, where material glows largely in X-rays, but also widely across the light spectrum. Anyone witnessing this event would see a brilliant celestial display. Arav said:

You’ll get lots of radiation first in X-rays and gamma rays, and afterwards it will percolate to visible and infrared light. You’d get a huge light show – like Christmas trees all over the galaxy.

Numerical simulations of galaxy evolution suggest that such outflows can explain some important cosmological puzzles, such as why astronomers observe so few large galaxies in the universe, and why there is a relationship between the mass of the galaxy and the mass of its central black hole. This study shows that such powerful quasar outflows should be prevalent in the early universe. Cosmologist Jeremiah P. Ostriker, of Columbia University in New York and Princeton University in New Jersey, commented:

Both theoreticians and observers have known for decades that there is some physical process that shuts off star formation in massive galaxies, but the nature of that process has been a mystery. Putting the observed outflows into our simulations solves these outstanding problems in galactic evolution.

Astronomers studied 13 quasar outflows, and they were able to clock the breakneck speed of gas being accelerated by the quasar wind by looking at spectral “fingerprints” of light from the glowing gas. The Hubble ultraviolet data show that these light absorption features created from material along the path of the light were shifted in the spectrum because of the fast motion of the gas across space. This is due to the Doppler effect, where the motion of an object compresses or stretches wavelengths of light depending on whether it is approaching or receding from us.

Aside from measuring the most energetic quasars ever observed, the team also discovered another outflow accelerating faster than any other. It increased from nearly 43 million miles per hour (70 million kilometers per hour) to roughly 46 million mph (74 million kph) in a three-year period. The scientists believe its acceleration will continue to increase over time. Team member Gerard Kriss of the Space Telescope Science Institute in Baltimore, Maryland, said:

Hubble’s ultraviolet observations allow us to follow the whole range of energy output from quasars, from cooler gas to the extremely hot, highly ionized gas in the more massive winds. These were previously only visible with much more difficult X-ray observations. Such powerful outflows may yield new insights into the link between the growth of a central supermassive black hole and the development of its entire host galaxy.

Bottom line: Astronomers using the Hubble Telescope found that the region around a quasar’s black hole pushes out material at a few percent the speed of light. These quasar tsunamis wreak havoc on the galaxies in which the quasars live.