A “beating heart” of frozen nitrogen controls Pluto’s winds and may give rise to features on its surface, according to a new study. 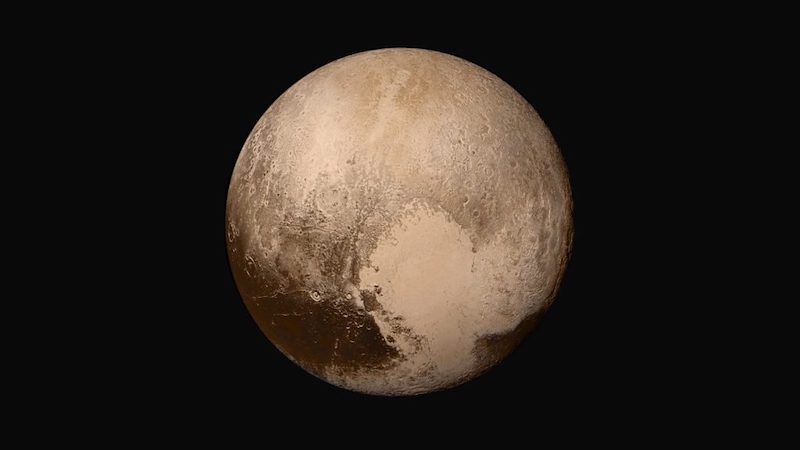 Only one earthly spacecraft has ever visited Pluto. New Horizons gathered the data to create this composite image in 2015. The heart-shaped feature is now called Tombaugh Regio. It’s a large, bright plain – largest feature on the planet – named for Pluto’s discoverer, Clyde Tombaugh. New research has revealed that this heart of Pluto’s makes the planet’s winds blow. Image via NASA/ JHU APL/ SWRI/ AGU.

Wasn’t it wonderful when – after all the disappointment surrounding Pluto’s loss of major planet status in 2006 – the New Horizons spacecraft made its historic sweep past the planet in 2015 and discovered a big heart on its surface? Last week (February 4, 2020), scientists announced something new and interesting about Pluto’s heart, which is called Tombaugh Regio, and which is a vast plain on the planet covered with nitrogen ice. The new research shows that Pluto’s renowned nitrogen heart rules its atmospheric circulation. It causes Pluto’s winds to blow.

This new research was published February 4 in the Journal of Geophysical Research: Planets. This journal is published by the American Geophysical Union (AGU). A statement from AGU explained:

During the day, a thin layer of [the nitrogen ice covering Tombaugh Regio] warms and turns into vapor. At night, the vapor condenses and once again forms ice. Each sequence is like a heartbeat, pumping nitrogen winds around the dwarf planet.

The new work suggests that this cycle pushes Pluto’s atmosphere to circulate in the opposite direction of its spin – a unique phenomenon called retro-rotation. As air whips close to the surface, it transports heat, grains of ice and haze particles to create dark wind streaks and plains across the north and northwestern regions of Tombaugh Regio. According to the study’s lead author, astrophysicist and planetary scientist Tanguy Bertrand of NASA’s Ames Research Center in California:

This highlights the fact that Pluto’s atmosphere and winds – even if the density of the atmosphere is very low – can impact the surface. 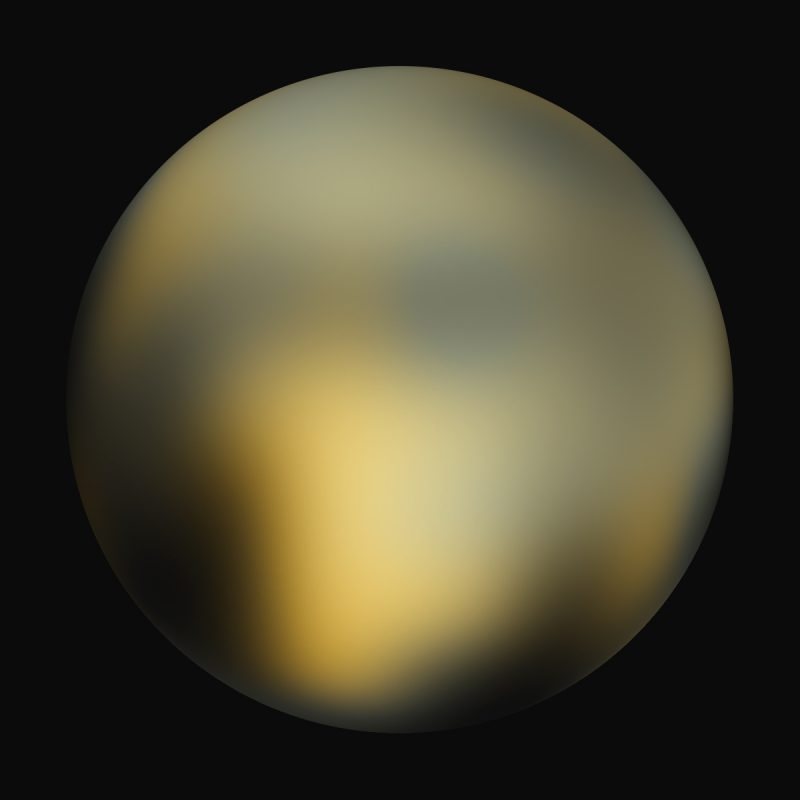 Before New Horizons visited Pluto, the Hubble Space Telescope captured this image of the distant planet in 2010. Pluto’s heart hadn’t been revealed then, but it’s somewhat discernible in this image. Image via NASA/ ESA/ M. Buie/ HubbleSite.

Pluto once was considered the outpost planet in our solar system, but no more. Now we know it’s one of many small bodies in the solar system’s frozen outer reaches, a realm now known as the Kuiper Belt. Pluto is located billions of miles from our planet Earth. It took New Horizons – one of the fastest spacecraft yet built by earthlings – nine years to get there. Once it did arrive, the information gathered by New Horizons required 4.5 hours to travel back to Earth, moving at the speed of light (186,000 miles per second).

In that distant realm of our solar system, nitrogen gas – the major component of Earth’s atmosphere – composes most of Pluto’s thin atmosphere, too. Most of the nitrogen ice on Pluto’s surface is confined to Tombaugh Regio, these scienists said. Describing Pluto’s heart, they said:

Its left ‘lobe’ is a 1,000-kilometer (620-mile) ice sheet located in a 3-kilometer (1.9-mile) deep basin named Sputnik Planitia – an area that holds most of the dwarf planet’s nitrogen ice because of its low elevation. The heart’s right ‘lobe’ is comprised of highlands and nitrogen-rich glaciers that extend into the basin. 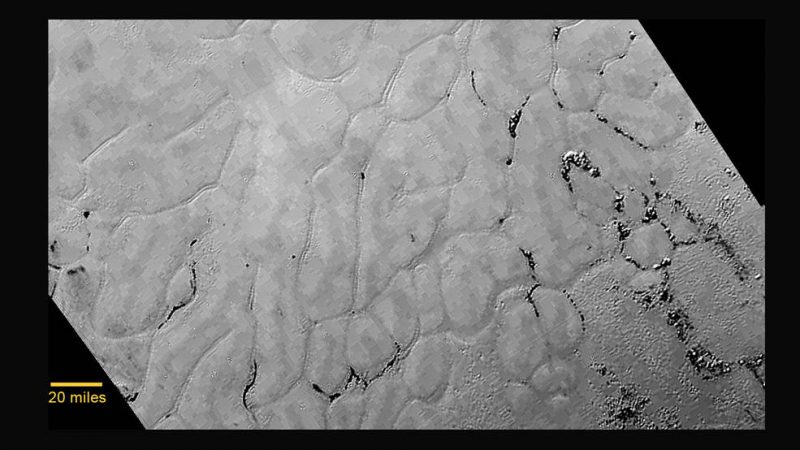 This close-up image from New Horizons shows the center left of Pluto’s heart. It’s a vast, craterless plain, covered with nitrogen ice. It may be no more than 100 million years old and is possibly still being shaped by geologic processes. This frozen region has been named Sputnik Planitia (Sputnik Plain), after Earth’s first artificial satellite. The surface appears to be divided into irregularly-shaped segments that are ringed by narrow troughs. Features that appear to be groups of mounds and fields of small pits are also visible. Image acquired July 14, 2015. Features as small as 1/2 mile (1 km) across are visible. Image via NASA/ JHU APL/ SWRI.

Before New Horizons, everyone thought Pluto was going to be a netball – completely flat, almost no diversity. But it’s completely different. It has a lot of different landscapes and we are trying to understand what’s going on there.

To accomplish this, Bertrand and his team pulled from New Horizons’ data and then simulated Pluto’s nitrogen cycle with a weather forecast model. They then assessed how winds blew across Pluto’s surface. Their statement explained:

The group discovered that Pluto’s winds above 4 kilometers (2.5 miles) blow to the west – the opposite direction from the dwarf planet’s eastern spin – in a retro-rotation during most of its year. As nitrogen within Tombaugh Regio vaporizes in the north and becomes ice in the south, its movement triggers westward winds, according to the new study. No other place in the solar system has such an atmosphere, except perhaps Neptune’s moon Triton.

The researchers also found a strong current of fast-moving, near-surface air along the western boundary of the Sputnik Planitia basin. The airflow is like wind patterns on Earth, such as the Kuroshio along the eastern edge of Asia. Atmospheric nitrogen condensing into ice drives this wind pattern, according to the new findings. Sputnik Planitia’s high cliffs trap the cold air inside the basin, where it circulates and becomes stronger as it passes through the western region.

The intense western boundary current’s existence excited Candice Hansen-Koharcheck, a planetary scientist with the Planetary Science Institute in Tucson, Arizona, who wasn’t involved with the new study. She said:

It’s very much the kind of thing that’s due to the topography or specifics of the setting. I’m impressed that Pluto’s models have advanced to the point that you can talk about regional weather.

On the broader scale, Hansen-Koharcheck thought the new study was intriguing. She added:

This whole concept of Pluto’s beating heart is a wonderful way of thinking about it. 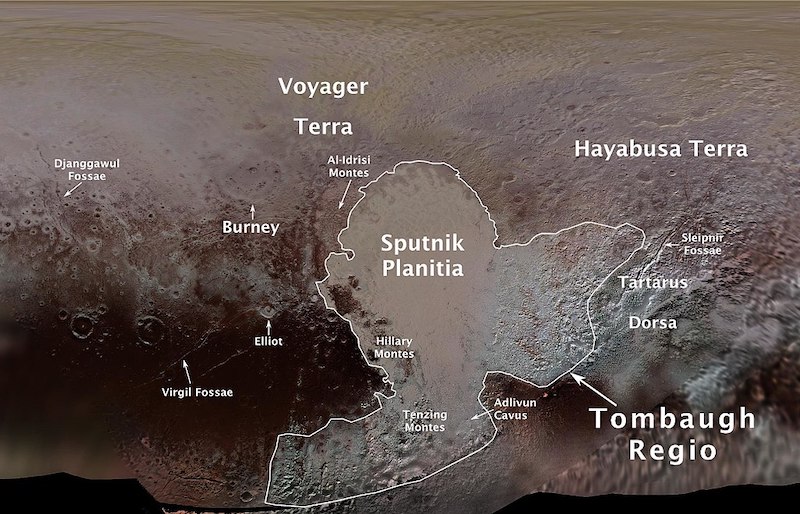 A map of the Tombaugh Regio area on Pluto, which includes the heart-shaped surface feature. Image via NASA/ JHU APL/ SWRI/ Wikimedia Commons.

Bottom line: A heart-shaped feature on Pluto is partly covered in frozen nitrogen. During the day, nitrogen ice evaporates in the north, then condenses back to ice at night in the south. According to a new study, this process sets off winds in a westerly direction for most of the Plutonian year, which is opposite to the dwarf planet’s eastward spin. They also found fast and powerful near-surface winds along the western boundary of the Sputnik Planitia basin.