No, it’s not pseudoscience. Does a regular alignment of planets make a strong-enough tug to regulate the sun’s 11- and 22-year cycles? Read more in this story via Eos – a source for news and perspectives about Earth and space science – from the American Geophysical Union. 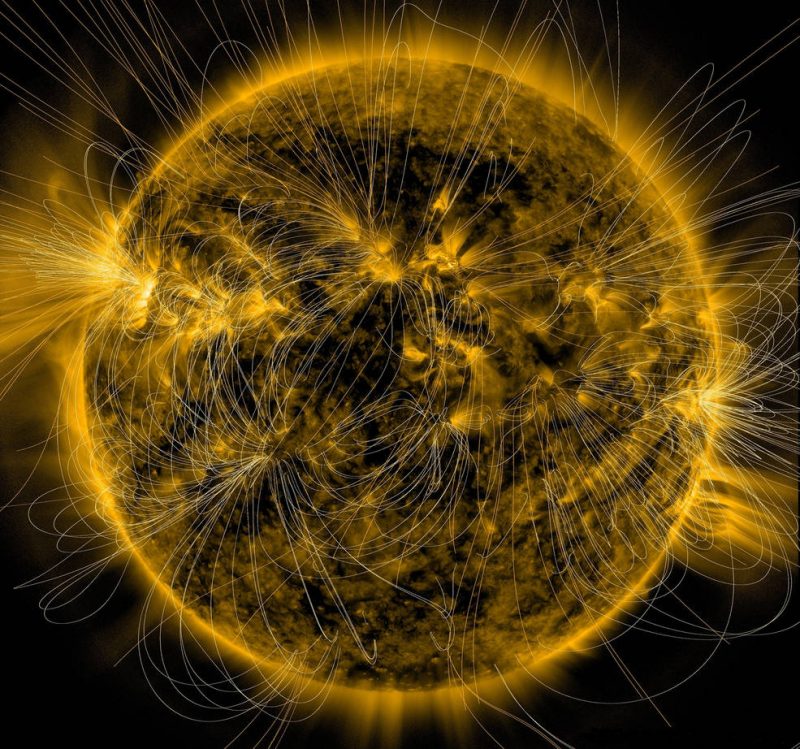 An ultraviolet image of the sun, overlaid with a map of its magnetic field lines. Image via NASA/SDO/AIA/LMSAL.

By Kimberly M. S. Cartier, reprinted with permission from Eos.

For more than 1,000 years, the number of sunspots hit a minimum within a few years of a major planetary alignment. A recent study showed that tides created by this alignment every 11 years are strong enough to tug on material near the sun’s surface and synchronize localized changes in its magnetic field.

We noticed from historical data that there is an astonishing degree of regularity in the sunspot cycle.

Stefani is a fluid dynamics research fellow at Helmholtz-Zentrum Dresden-Rossendorf in Dresden, Germany. He said:

We definitely have a clocked process. But then the question was, What is the clock?

The study expands upon the commonly accepted model for the solar dynamo and supports a long-held theory that planetary configurations are responsible for the sunspot cycle and magnetic solar cycle. 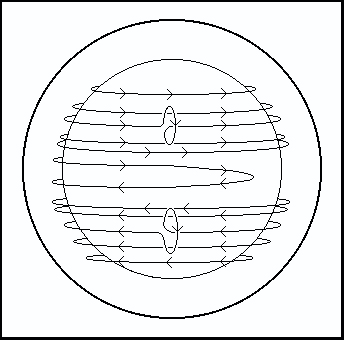 A simplified schematic of a single magnetic field line as it wraps around the sun (omega effect) and then twists upon itself (alpha effect). The arrows indicate the direction that solar material moves as it drags the field line with it. Image via NASA/MSFC.

On top of the rotational motion of solar plasma, convection moves material from the equator to the poles and back again. That twists the field lines around each other into loops and spirals.

This model is the commonly accepted explanation for the behavior of the sun’s magnetic field, but it’s not perfect, Stefani explained. It predicts that the instabilities’ twistedness will oscillate randomly every few years. But the model can’t explain why the number of sunspots waxes and wanes on a roughly 11-year cycle or why the sun’s magnetic field flips polarity every 22 years.

Another solar system phenomenon happens every 11 years: Venus, Earth, and Jupiter align in their orbits. These three planets have the strongest tidal effect on the sun, the first two because of their proximity to the sun and the third because of its mass. Past observational studies have shown that minima in the sunspot cycle have occurred within a few years of this alignment for the past 1,000 years or so. Stefani said:

If you look at the trend, it has an amazing parallelism.

The researchers wanted to test whether the planetary alignment could influence the sun’s alpha effect and force an interplanetary low tide at regular intervals. The team started with a standard alpha-omega dynamo model and added a small tidal tug to the alpha effect every 11 years to simulate the alignment. Stefani explained:

Our dynamo model is not a completely new one. We’re really building on the old-fashioned, or conventional, alpha-omega dynamo.

The simulation showed that even a weak tidal tug of 1 meter [about 1 yard] per second every 11 years forced unstable magnetic twists to pulse with that same period. The simulated dynamo’s polarity oscillated with a 22-year period just like the real solar dynamo. Stefani said:

With a little bit of this periodic alpha, we can indeed synchronize the dynamo period to 22 years [with] planetary forcing.

Because those magnetic instabilities are connected with solar activity, the researchers argue, this synchronization could also suppress (or generate) sunspots across the sun at roughly the same time – in other words, the sunspot cycle. The team published these results in Solar Physics in late May 2019.

Steve Tobias is a solar dynamo researcher at the University of Leeds in the United Kingdom who was not involved with this research. He said:

This is an intriguing paper.

Tobias argued that the combined planetary tides are too weak to directly set the length of the solar cycle. Plasma dynamics deep within the sun are the more likely cause, he told Eos.

Nevertheless, he said, this study

… seems to show that even a tiny amount of forcing from tidal processes can resonantly synchronize the cycle. This counterintuitive result should be explored further by investigating the behavior of proxies for solar activity such as the production rates of isotopes of beryllium deposited in ice cores.

It’s possible that other planetary systems might have tidally dominant planets that resonate with their suns like ours do, Stefani said, but it’s not likely that we’ll be able to prove it. For most stars, he said:

… we have observations going back about 40 years. And people are happy if they can identify two or three or four periods. Only for our Sun do we have all the historical observations. We have beryllium data. We can go back for thousands of years.

Our sun is quite an ordinary star, but it is quite special in that sense.

Bottom line: New research suggests that a regular alignment of the planets makes a strong enough tug to regulate the sun’s 11- and 22-year cycles.