NASA announced that its Perseverance rover mission – which will search for evidence of ancient microbial life on Mars – has now passed the halfway mark in its journey to the planet. 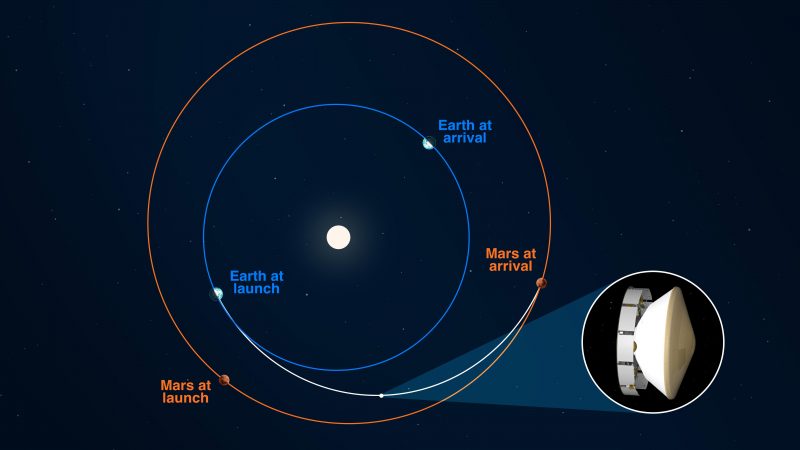 NASA’s newest Mars mission, the Perseverance rover, is now halfway to the red planet, the space agency announced on October 27, 2020. It’s the latest milestone for the mission that will be the first since the Viking landers of the 1970s and 1980s to look directly for evidence of microbial life on Mars. Julie Kangas, a navigator for the mission, commented on October 27::

At 1:40 p.m. Pacific Time today, our spacecraft will have just as many miles in its metaphorical rearview mirror as it will out its metaphorical windshield. While I don’t think there will be cake, especially since most of us are working from home, it’s still a pretty neat milestone. Next stop, Jezero Crater. 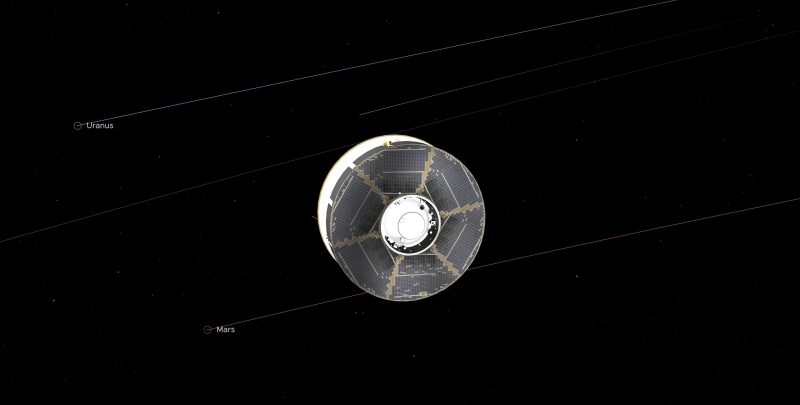 Although we’re halfway into the distance we need to travel to Mars, the rover is not halfway between the two worlds. In straight-line distance, Earth is 26.6 million miles [42.7 million km] behind Perseverance and Mars is 17.9 million miles [28.8 million km] in front.

Perseverance’s flight path is a curved trajectory due to the gravitational influence of the sun, which also affects the relative motion of the two planets.

The spacecraft also continues to be in good health. The mission team tested the RIMFAX and MOXIE instruments onboard on October 15, and found them to be in good shape. RIMFAX will probe the ground beneath the rover with radar and MOXIE will attempt to produce oxygen from the Martian atmosphere, a procedure that could be used by future astronauts for oxygen to breathe and to burn rocket fuel for the return trip back to Earth. On October 16, the X-ray tube in the PIXL instrument was tested, as well as the MEDA instrument on October 19, with similar results. PIXL will analyze the fine scale elemental composition of rocks and soil, while MEDA will study temperature, wind speed and direction, pressure, relative humidity and dust size and shape. 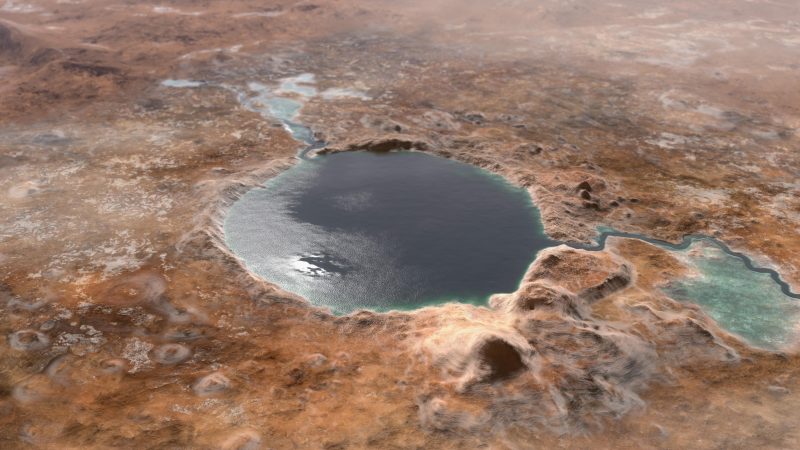 Jezero Crater, the landing site for Perseverance, used to be a lake a few billion years ago, making it a prime location in the search for past microbial life. Image via NASA/ JPL-Caltech.

If it is part of our spacecraft and electricity runs through it, we want to confirm it is still working properly following launch. Between these checkouts – along with charging the rover’s and Mars Helicopter’s batteries, uploading files and sequences for surface operations, and planning for and executing trajectory correction maneuvers – our plate is full right up to landing.

Perseverance will land in Jezero Crater, which, a few billion years ago, held a lake. There is even an ancient delta where a river once emptied into the lake, and the rover will touch down near it.

Because the crater is an ancient lakebed with clays and sediments, the landing site is considered to be a prime location to search for traces of ancient microbial life. While the Viking landers looked for current life, Perseverance will focus on past life. It is still, however, the first Mars mission since then to have astrobiology as its primary mission. Other rovers, like Spirit and Opportunity (MER) and Curiosity, are more geology-focused, looking for evidence of past habitable conditions rather than life itself. 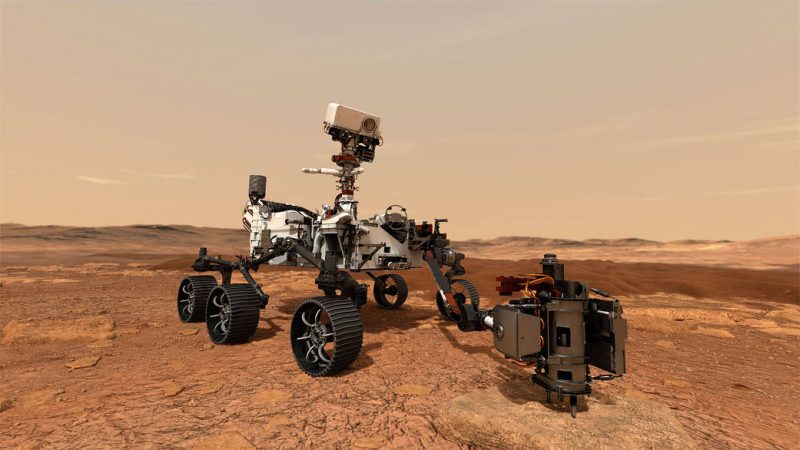 Artist’s illustration of the Perseverance rover on Mars. Image via NASA/ JPL-Caltech.

As well as analyzing rock and soil samples in its onboard laboratory, Perseverance will store some of the samples for later return to Earth by another mission. This is the first time such a sample return from Mars will be attempted.

The rover, about the size of a car, is very similar in design to the Curiosity rover, but with updated instruments including ones specifically for searching for trace chemical or fossil evidence of past microbial life.

Perseverance also has a companion on this mission, a small drone-like helicopter called Ingenuity. It will fly ahead of the rover, acting as a scout to view the terrain from above and help spot interesting features for the rover to drive to. If successful, it will be the first-ever aircraft to be flown in the atmosphere of another planet.

The key objectives of the Perseverance mission include:

• Explore a geologically diverse landing site
• Assess ancient habitability
• Seek signs of ancient life, particularly in special rocks known to preserve signs of life over time
• Gather rock and soil samples that could be returned to Earth by a future NASA mission
• Demonstrate technology for future robotic and human exploration 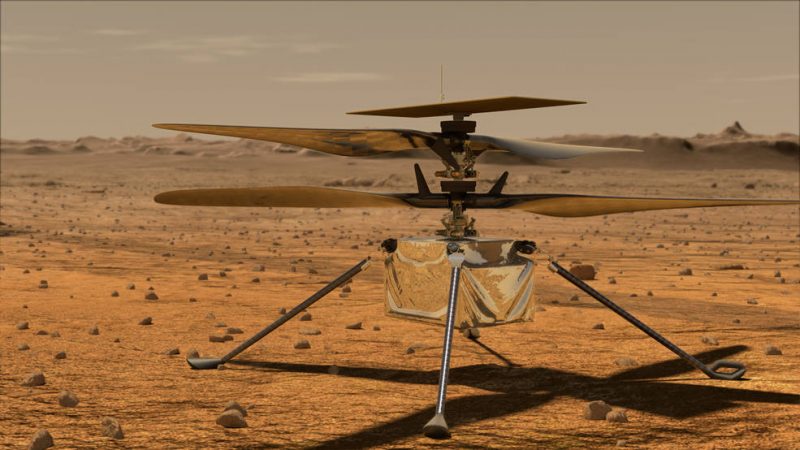 Artist’s illustration of Ingenuity, a small drone-like helicopter that is going to Mars along with Perseverance. Image via NASA/ JPL-Caltech.

With the halfway mark now attained, there are only about four more months until Perseverance lands on Mars. This will be an exciting mission, one that not only will provide more clues as to what Mars used to be like billions of years ago – as a more habitable world – but perhaps even discover the first solid evidence for ancient life hidden in the dust-covered rocks and sand.

You can read more about Perseverance on the mission website.

Bottom line: NASA’s Perseverance rover mission has passed the halfway mark in its journey to Mars.