Check out this sweeping vista on the planet Mars, taken by the Curiosity rover from a mountainside ridge. It provides a look back at key sites visited by the rover since its 2012 landing.

Curiosity Project Scientist Ashwin Vasavada gives a descriptive tour of the Mars rover’s view in Gale Crater. The white-balanced (rocks appear the same color as the same rocks would on Earth) scene looks back over the journey so far. The view from Vera Rubin Ridge looks back over buttes, dunes and other features along the route. See where the rover is now.

NASA’s Curiosity Mars rover took the panoramic image (below) from Vera Rubin Ridge on the north flank of the planet’s Mount Sharp. The view encompasses much of the 11-mile (18-km) route the rover has driven from its 2012 landing site, all inside Gale Crater. One hill on the northern horizon is about 50 miles (about 85 km) away, well outside the crater, though most of the scene’s horizon is the crater’s northern rim, roughly one-third that distance away and 1.2 miles (two km) above the rover. 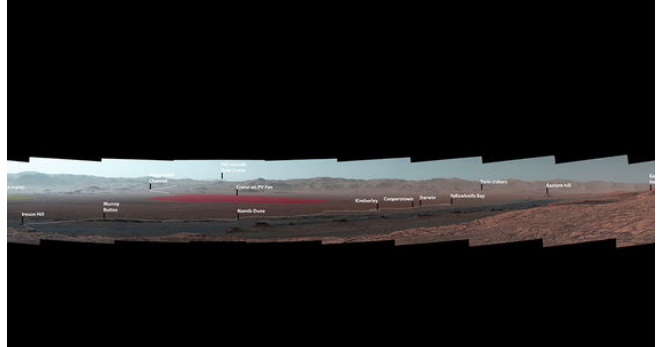 View the image (much) larger.

Curiosity’s Mast Camera, or Mastcam, took the component images of the panorama on October 25, 2017, during the 1,856th Martian day, or sol, of the rover’s work on Mars. At that point, Curiosity had gained 1,073 feet (327 meters) in elevation and driven 10.95 miles (17.63 km) from its landing site. The mission has subsequently approached the southern edge of Vera Rubin Ridge and examined several outcrop locations along the way.

This image indicates the the initial portion of the rover’s approximate path since it landed at Bradbury Landing in 2012, including investigation sites Yellowknife Bay, Darwin and Cooperstown. The rover’s exact landing site is hidden behind a slight rise. The heat shield, back shell, and parachute used during the spacecraft’s descent are within the pictured area but not recognizable due to the distance and to camouflaging by dust. At Yellowknife Bay in 2013, the mission found evidence of an ancient freshwater-lake environment that offered all of the basic chemical ingredients for microbial life. Image via NASA/JPL.

Last week, the Curiosity team on Earth received copious new images from the rover through a record-setting relay by NASA’s MAVEN orbiter – surpassing a gigabit of data during a single relay session from Mars for the first time in history.

Bottom line: A panoramic image that NASA’s Curiosity Mars rover took in from a mountainside ridge in October 2017 shows key sites the rover’s visited since its 2012 landing.