Opportunity – nicknamed “Oppy” – was active on Mars from 2004 until June, 2018, when a planet-wide dust storm covered it. Its final image is a panorama, acquired from Opportunity’s final resting place in Mars’ Perseverance Valley. 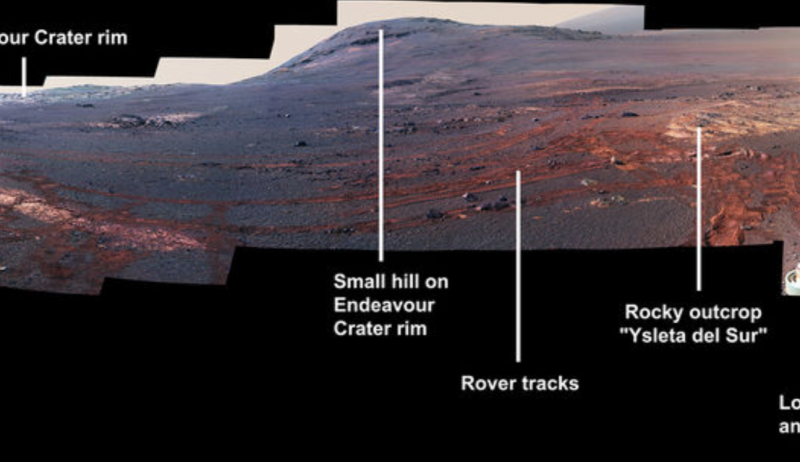 View complete image. | This image is a cropped version of the last 360-degree panorama taken by the Opportunity rover’s Panoramic Camera (Pancam) from May 13 through June 10, 2018. The view is presented in false color to make some differences between materials easier to see. Image via NASA/JPL-Caltech/Cornell/ASU.

Over 29 days in spring of 2018, NASA’s Opportunity rover on Mars documented a 360-degree panorama from multiple images taken in Mars’ Perseverance Valley. And then a dust storm rolled in, causing Opportunity – whose nickname is “Oppy” – to cease communications with Earth on June 10. Many hoped Opportunity would reboot once the weather cleared, but it did not. On February 13, 2019, NASA officials declared that the Opportunity mission was complete, after the spacecraft had failed to respond to over 1,000 signals sent since August 2018. And thus the panorama in Perseverance Valley – a portion of which is shown above – was Opportunity’s final image.

This final panorama embodies what made our Opportunity rover such a remarkable mission of exploration and discovery.

To the right of center you can see the rim of Endeavor Crater rising in the distance. Just to the left of that, rover tracks begin their descent from over the horizon and weave their way down to geologic features that our scientists wanted to examine up close.

And to the far right and left are the bottom of Perseverance Valley and the floor of Endeavour crater, pristine and unexplored, waiting for visits from future explorers.

The entire panorama – which you can see below or here – is composed of 354 individual images provided by the rover’s Panoramic Camera (Pancam) from May 13 through June 10, 2019. Those dates correspond to sols (Martian days) 5,084 through 5,111.