“It’s so rare, particularly these days after so many years of Hubble, that you get an image of something and say, ‘I’ve never seen that before.’” 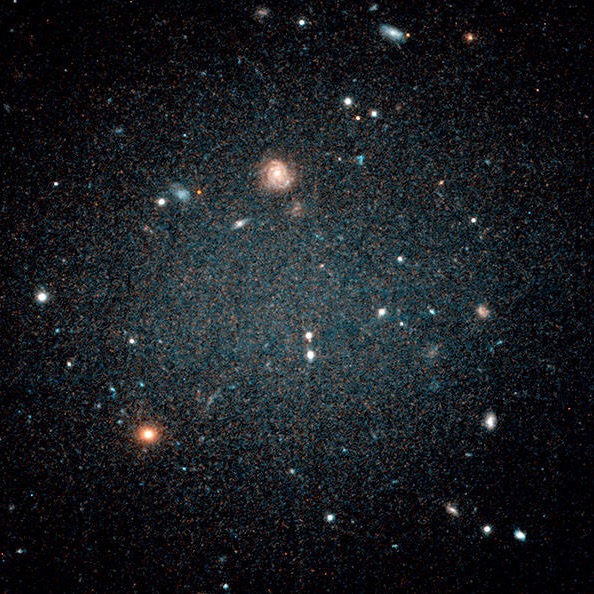 The ghostly galaxy NGC 1052-DF2 is exceedingly diffuse. See the distant galaxies behind it? The galaxy is missing most, if not all, of its dark matter. The Hubble Space Telescope’s Advanced Camera for Surveys acquired this image, which is via NASA, ESA, and P. van Dokkum, Yale.

In recent decades, astronomers have believed that invisible, mysterious dark matter is the dominant aspect of any galaxy. Astronomers think that dark matter is needed to form galaxies. That’s why they are so surprised to find a galaxy with no (or very little) dark matter. The finding challenges astronomers’ ideas about how galaxies come to be. A Yale-led research team made the discovery while peering at the distant galaxy NGC 1052-DF2. These astronomers say their finding has broad implications for our understanding of the universe. A March 28, 2018 statement from Yale said:

Astronomer Pieter van Dokkum at Yale is lead author of the new study, which is published in the peer-reviewed journal Nature. He said:

We thought that every galaxy had dark matter and that dark matter is how a galaxy begins.

To make this discovery, the team used a telescope invented by van Dokkum and built with co-author Roberto Abraham of the University of Toronto. It’s called the Dragonfly Telephoto Array. The galaxy had been cataloged previously, but these researchers said they noticed it looked very different in the Dragonfly images. Co-author Shany Danieli, a Yale graduate student, commented:

It looked like a diffuse blob sprinkled with very compact star clusters. I love working with the Dragonfly telescope, as it shows us faint structures that no one has even seen before.

The researchers then used the W.M. Keck Observatory in Hawaii to measure the motions of 10 very dense groupings of stars called globular clusters, orbiting this galaxy’s center. They found that the clusters were moving at relatively low speeds — less than 23,000 miles (37,000 km) per hour. Stars in galaxies containing dark matter move at least three times faster. Van Dokkum explained that, using the new motion measurements, the researchers were able to calculate NGC 1052-DF2’s mass. That’s when they realized that this galaxy was very, very different from other galaxies. Van Dokkum said:

If there is any dark matter at all, it’s very little. The stars in the galaxy can account for all the mass, and there doesn’t seem to be any room for dark matter.

I spent an hour just staring at the Hubble image. It’s so rare, particularly these days after so many years of Hubble, that you get an image of something and say, ‘I’ve never seen that before.’ This thing is astonishing, a gigantic blob that you can look through. It’s so sparse that you see all of the galaxies behind it. It is literally a see-through galaxy.

Bottom line: The galaxy NGC 1052-DF2 appears to have no dark matter. It confounds astronomers’ theories of the universe, which says galaxies need dark matter to form.