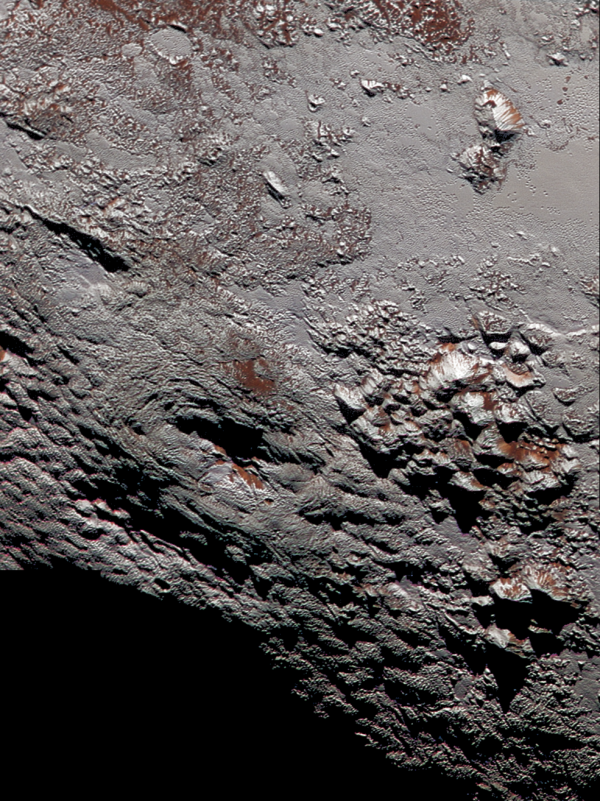 View larger. | This composite image of a possible ice volcano on Pluto includes pictures taken by the New Horizons spacecraft’s Long Range Reconnaissance Imager (LORRI) on July 14, 2015, from a range of about 30,000 miles (48,000 kilometers), showing features as small as 1,500 feet (450 meters) across. Sprinkled across the LORRI mosaic is enhanced color data from the Ralph/Multispectral Visible Imaging Camera (MVIC), from a range of 21,000 miles (34,000 kilometers) and at a resolution of about 2,100 feet (650 meters) per pixel. The entire scene is 140 miles (230 kilometers) across. Image credit: NASA/JHUAPL/SwRI

Yesterday (January 14, 2016), NASA released this composite image of one of two potential cryovolcanoes spotted on the surface of Pluto. Scientists with NASA’s New Horizons mission assembled this highest-resolution color view from images taken by the New Horizons spacecraft in July 2015.

Mission geologists have suggested that two of Pluto’s most distinctive mountains could be cryovolcanoes – ice volcanoes that may have been active in the recent geological past.

The feature in the image above, known as Wright Mons, was informally named by the New Horizons team in honor of the Wright brothers. At about 90 miles (150 kilometers) across and 2.5 miles (4 kilometers) high, this feature is enormous. If it is in fact a volcano, as suspected, it would be the largest such feature discovered in the outer solar system.

Mission scientists are intrigued by the sparse distribution of red material in the image and wonder why it is not more widespread. Also perplexing is that there is only one identified impact crater on Wright Mons itself, telling scientists that the surface (as well as some of the crust underneath) was created relatively recently. This is turn may indicate that Wright Mons was volcanically active late in Pluto’s history. 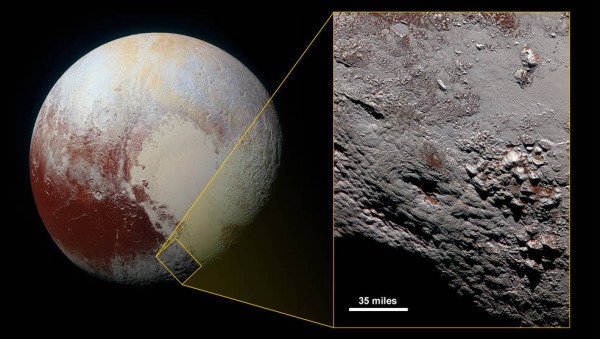 Bottom line: Composite image, assembled by scientists with NASA’s New Horizons mission, of one of two potential cryovolcanoes spotted on the surface of Pluto. The highest-resolution color view was created from images taken by the New Horizons spacecraft in July 2015.