The naming suggestions in a contest – which ran from last February to April – ranged from the scholarly to the silly, these scientists said. We think you’ll like the winners. 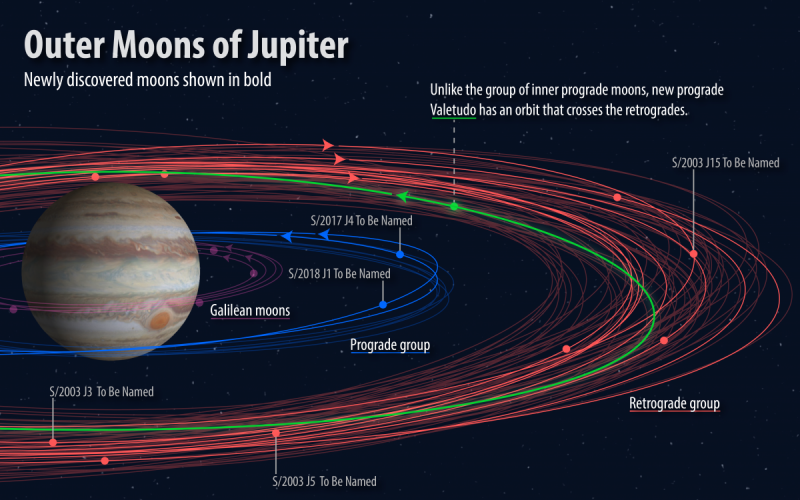 Jupiter officially has 12 new moons, discovered in 2018. They are outer moons; their orbits are shown here. Image via Carnegie Science.

The Carnegie Institution for Science – headquartered in Washington, D.C. – announced in late August that the winners of its Jupiter-moon-naming contest have been selected. From February to April, this institution had solicited name suggestions for five of the 12 moons of Jupiter discovered in 2018 by a team led by Carnegie’s Scott S. Sheppard.

I was blown away by the enthusiastic response for this contest. I hope the thought of these moons let everyone ponder the wonder and amazement that is our universe. 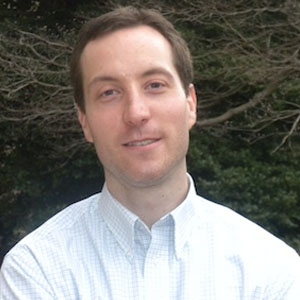 He added that there are many rules in place – regulated by the International Astronomical Union (IAU) – when it comes to naming new moons:

Most notably, Jovian naming conventions require its many moons to be named after characters from Greek and Roman mythology who were either descendants or consorts of Zeus, or Jupiter.

And there are other strictures as well, including a maximum character length and the final letter of each name, depending on the direction of a moon’s orbit. Carnegie Science combed through people’s suggestions and sent what they felt were the best-suited names to the IAU, which published the final names on August 23, 2019. Here they are:

She is the daughter of Zeus and the Moon goddess Selene. Pandia is the goddess of the full moon and the sister of Ersa. The name Pandia was one of the more popular names entered into the contest. Our favorite submission was representing the astronomy club of the Lanivet School in Cornwall, England. Emma Hugo (@emmabray182) tweeted a picture of the astro club with a Pandia sign and the school’s Panda mascot, which is in honor of the village’s former role as bamboo supplier to the London zoo.

#NameJupitersMoons Pandia!! daughter of Zeus and Selene, goddess of moon's.
Also our schools logo/mascot is a panda, very similar name. The Astro club chose this name! Our village used to provide London zoo with bamboo for the pandas that lived there. pic.twitter.com/wR0940PHNc

She is the sister of Pandia and, as such, also the daughter of Zeus and the Moon goddess Selene. Ersa is the goddess of dew. There were more than 20 tweets suggesting the name Ersa. Being the daughter of a Moon goddess seemed very appropriate for a Jovian moon. The first submission was from space news aggregator Aaron Quah (@8603103) and the submissions that most caught our eye about Ersa were submitted by the 12th grade students of Saint Sauveur High School in Redon, France (@StSauMoons), on behalf of the fifth grade at Hillside Traditional Academy in Mission, British Columbia (@mrgrouchypants), and on behalf of a 4-year-old lunar expert Walter who sang us a moon song (@Thoreson).

@JupiterLunacy Our 4-year-old resident moon expert Walter would like to submit 3 name options for Jupiter's new moons: Selene (Greek goddess of the moon and lover of Jupiter/Zeus) and their daughters Pandeia and Ersa. #NameJupitersMoons https://t.co/2YG2Q85Dyz

She is the goddess of peace and the daughter of Zeus and Themis. About 16 tweets suggested naming a Jupiter moon Eirene. The first submission was from Quadrupoltensor (@Quadrupoltensor), and the entry for Eirene that caught our eye (@PJRYYC) was submitted on behalf of a 10-year-old who loves Greek and Roman mythology.

She is the spirit of welcome and kindness and is the granddaughter of Zeus and sister of Eupheme. Winning submissions were from an 11th grade history class with a proclaimed interest in Greek and Roman mythology, CHW3M Myth Experts (@Chw3mmyths); Victoria (@CharmedScribe); and Lunartic (@iamalunartic), an account dedicated to moons, which posted several videos about the contest, including one that evaluated this suggestion.

She is the spirit of praise and good omen, the granddaughter of Zeus, and the sister of Philophrosyne. Winning submission was from the same video by Lunartic (@iamalunartic).