Scientists see a new kind of explosion on the sun

A new kind of magnetic explosion, called forced magnetic reconnection, was seen for the first time in images from NASA’s SDO spacecraft. Learn more in this beautiful video.

NASA said on December 17, 2019, that its Solar Dynamics Observatory (SDO) observed a kind of magnetic explosion on the sun that scientists had never seen before. The spacecraft spied the explosion when a prominence — a large loop of material launched by an eruption on the sun’s surface — started falling back to the surface. Before it reached the surface, the prominence ran into a snarl of magnetic field lines, sparking a magnetic explosion. A statement from NASA explained:

Scientists have previously seen the explosive snap and realignment of tangled magnetic field lines on the sun – a process known as magnetic reconnection – but never one that had been triggered by a nearby eruption. The observation, which confirms a decade-old theory, may help scientists understand a key mystery about the sun’s atmosphere, better predict space weather, and may also lead to breakthroughs in the controlled fusion and lab plasma experiments.

So the new kind of magnetic explosion – called forced magnetic reconnection – wasn’t entirely unexpected, but it’s been theoretical until now. This sort of explosion was first theorized 15 years ago.

The new observations were published December 17 in the Astrophysical Journal.

Read more about the new findings from NASA. 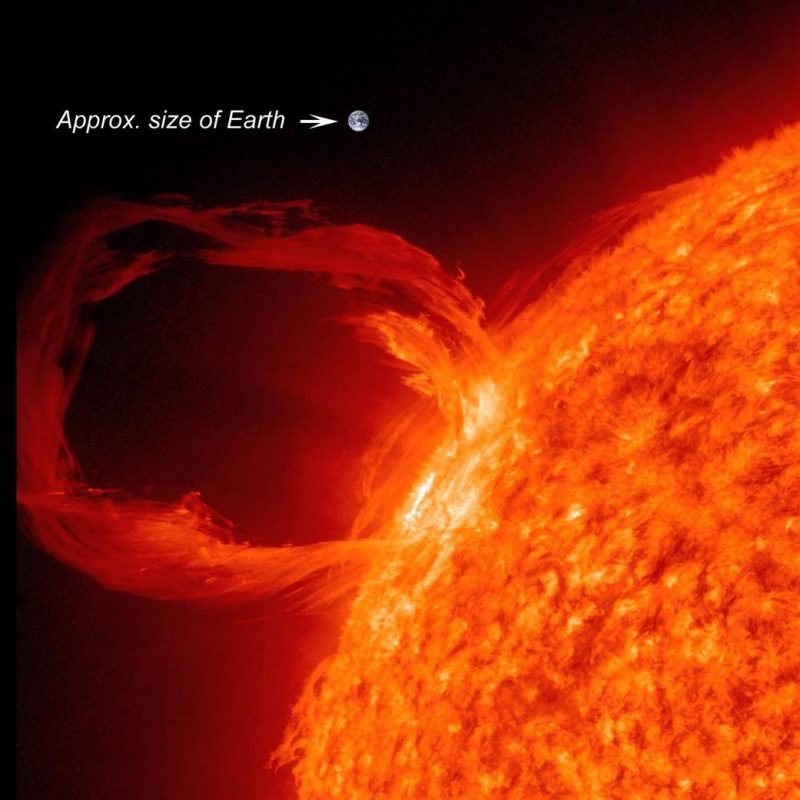 A solar prominence (also known as a filament when viewed against the solar disk) is a large, bright feature extending outward from the sun’s surface. Prominences are anchored to the sun’s surface in the photosphere, and extend outwards into the sun’s hot outer atmosphere, called its corona. A prominence forms over timescales of about a day, and stable prominences may persist in the corona for several months, looping hundreds of thousands of miles into space. This image, from March 2010, shows a solar eruptive prominence, with Earth superimposed for a sense of scale. Image via NASA/ SDO.

This image shows the sun on May 3, 2012, with the inset showing a closeup of the reconnection event imaged by SDO’s Atmospheric Imaging Assembly instrument, where the signature X-shape is visible. Image via NASA/ SDO/ Abhishek Srivastava/ IIT(BHU).

Bottom line: A NASA video explains a new kind of explosion observed from the sun.

Source: On the Observations of Rapid Forced Reconnection in the Solar Corona