In the middle of little-known nebula Gum 41, brilliant hot young stars are giving off energetic radiation that causes the surrounding hydrogen to glow red. 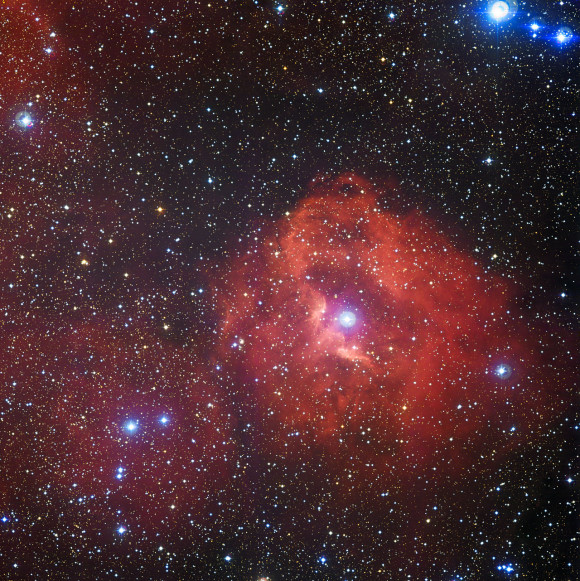 This new image from ESO’s La Silla Observatory in Chile reveals a cloud of hydrogen called Gum 41. In the middle of this little-known nebula, brilliant hot young stars are giving off energetic radiation that causes the surrounding hydrogen to glow with a characteristic red hue.

This area of the southern sky, in the constellation of Centaurus (The Centaur), is home to many bright nebulae, each associated with hot newborn stars that formed out of the clouds of hydrogen gas. The intense radiation from the stellar newborns excites the remaining hydrogen around them, making the gas glow in the distinctive shade of red typical of star-forming regions. Another famous example of this phenomenon is the Lagoon Nebula, a vast cloud that glows in similar bright shades of scarlet.

The nebula in this picture is located some 7,300 light-years from Earth. Australian astronomer Colin Gum discovered it on photographs taken at the Mount Stromlo Observatory near Canberra, and included it in his catalogue of 84 emission nebulae (https://galaxymap.org/cgi-bin/gum.py?s=1), published in 1955. Gum 41 is actually one small part of a bigger structure called the Lambda Centauri Nebula, also known by the more exotic name of the Running Chicken Nebula (another part of which was the topic of https://www.eso.org/public/news/eso1135). Gum died at a tragically early age in a skiing accident in Switzerland in 1960.

In this picture of Gum 41, the clouds appear to be quite thick and bright, but this is actually misleading. If a hypothetical human space traveller could pass through this nebula, it is likely that they would not notice it as — even at close quarters — it would be too faint for the human eye to see. This helps to explain why this large object had to wait until the mid-twentieth century to be discovered — its light is spread very thinly and the red glow cannot be well seen visually.

This new portrait of Gum 41 — likely one of the best so far of this elusive object — has been created using data from the Wide Field Imager (WFI) on the MPG/ESO 2.2-meter telescope at the La Silla Observatory in Chile. It is a combination of images taken through blue, green, and red filters, along with an image using a special filter designed to pick out the red glow from hydrogen.