New Horizons aiming toward next target

On Sunday, the craft that explored Pluto successfully executed the 2nd of 4 maneuvers designed to aim it toward a small Kuiper Belt object called 2014 MU69. 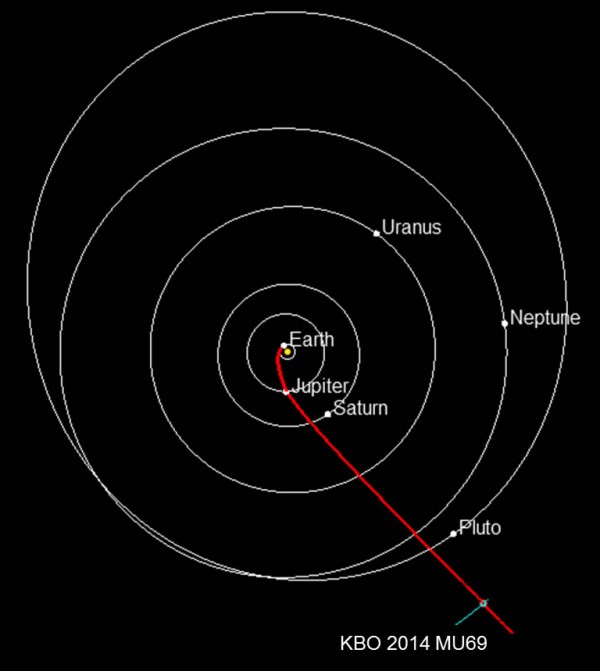 The fast-moving New Horizons spacecraft is now approximately 74 million miles (119 million km) beyond the Pluto system, which it swept through in July. On Sunday – October 25, 2015 – the spacecraft successfully carried out the second in a series of four initial targeting maneuvers ultimately designed to send it toward its next target. That target is a small body in the Kuiper Belt, about a billion miles beyond Pluto, called 2014 MU69. NASA said:

The four planned maneuvers will change New Horizons’ trajectory by approximately 57 meters per second, nudging it toward a prospective close encounter with MU69 on January 1, 2019 …

The New Horizons team wants the 2014 MU69 flyby, but, to get it, NASA has to extend New Horizons’ mission. The team will submit a formal proposal to NASA in early 2016 to send the spacecraft to 2014 MU69 which it has nicknamed PT1, for Potential Target 1.

While preparing to submit that proposal, the team is making sure the spacecraft will be ready to go. The first maneuver took place on October 22, using two of the spacecraft’s small hydrazine-fueled thrusters. It lasted approximately 16 minutes and changed the spacecraft’s trajectory by about 10 meters per second. The burn started at 1:50 p.m. EDT on that day, and spacecraft operators at the Johns Hopkins University Applied Physics Laboratory in Laurel, Maryland began receiving data indicating a successful maneuver through NASA’s Deep Space Network at approximately 8:30 p.m. EDT.

The remaining two KBO targeting maneuvers are scheduled for October 28 and November 4.

New Horizons is now 3.16 billion miles (5.08 billion km) from Earth. The spacecraft is said to be healthy and continues to return data stored on its digital recorders from its Pluto flyby.

Bottom line: The New Horizons spacecraft team – same team that sent the craft whizzing past Pluto in July – wants now to aim toward a new target, a Kuiper Belt object called 2014 MU69. It is re-positioning the spacecraft slightly, in a series of four maneuvers, to prepare for that possibility. Like the first maneuver, the second – on October 25, 2015 – was a success. If approved by NASA, the 2014 MU69 flyby will take place on January 1, 2019.