For 40 years, astronomers have puzzled over signs of a green aurora on Venus, despite the planet’s lack of a magnetic field. 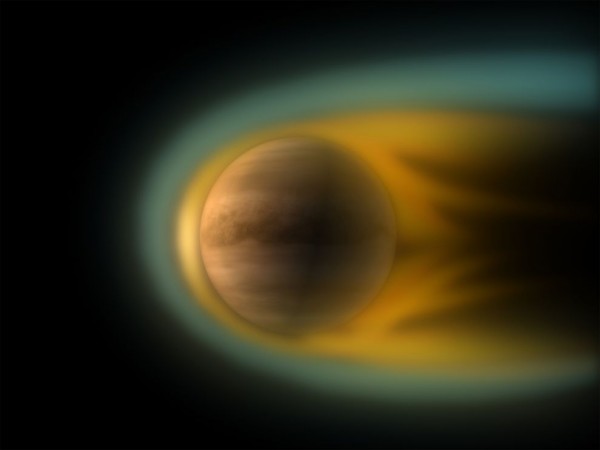 Venus orbits closer to the sun than Earth. At that closer distance, solar storms may strike the planet so powerfully that the lack of a magnetic field on Venus might not matter. Illustration by C. Carreau/ESA

Astronomers love a good mystery, and here’s one they’ve pondered for decades. That is, Venus may have green auroras despite the fact it has no magnetic field of its own. On Earth, beautiful auroras – northern or southern lights – result from an influx of charged particles from the sun, typically following strong solar flares. Our world’s magnetic field captures these particles and funnels them toward Earth’s magnetic poles, where they collide with atoms and molecules in the ionosphere. The collisions “excite” the atoms in the upper atmosphere, causing them to emit auroral light. This same process can’t take place on Venus, because Venus doesn’t have a magnetic field. And yet, for decades, astronomers have seen light from Venus indicating “excited oxygen,” the same substance that, on Earth, produces the green light of auroras. Hence the mystery.

Does Venus have green auroras? It’s a mystery that four astronomers – Candace Gray and Nancy Chanover of New Mexico State University in Las Cruces, New Mexico, Tom Slanger of SRI in Menlo Park, California, and Karan Molaverdikhani of the University of Colorado at Boulder – set out to solve. These astronomers shared their findings on November 12, 2014 at a meeting of the American Astronomical Society’s Division for Planetary Sciences on Wednesday in Tucson, Arizona. Candace Gray said in a press release:

On Venus, the green line [indicating excited oxygen, and hence auroras] has been seen only intermittently.

Likewise, on Earth, auroras are a fleeting natural phenomenon, bright one night and gone the next. 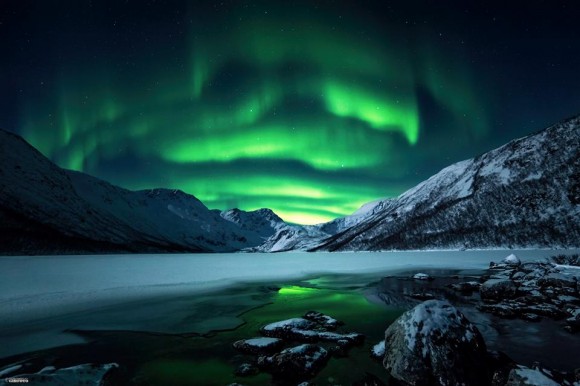 View larger. | Earthly aurora on the night of January 9-10, 2014. Photo by Geir-Inge Buschmann

Gray, Chanover, Slanger and Molaverdikhani conducted their study of Venus at Apache Point Observatory (APO) in the Sacramento Mountains in Sunspot, New Mexico (near Cloudcroft). From 2012 to 2014, they were given 5 nights to observe four times, and each time they were very lucky that an X-flare – the strongest kind of solar flare – not only took place but also was directed right at Venus. Slanger said:

The results were amazing! [For example], there was a major solar storm in July 2012, producing an X-flare and huge coronal mass ejection that was directed right at Venus. We saw the brightest green line that had ever been detected.

The team also noted that the green line of excited oxygen was detected not after every flare, but only after those flares whose charged particles were directed at Venus. This result suggests that the solar charged particles are responsible for green line emission, in a way similar to the process that causes Earth’s auroras.

Still, what is the specific atmospheric chemistry on Venus that might produce an aurora in the absence of a magnetic field? For part of the answer, the team of astronomers looked to the Venus Express spacecraft, a European Space Agency mission that has been orbiting Venus since 2005. In April 2012, Venus Express helped scientists recognize a process of magnetic reconnection – the process that causes auroras on Earth – not on Venus itself, but in a long magnetotail extending out from Venus on the side opposite the sun. This magnetotail is generated not from within Venus itself (without a magnetic field of its own, Venus can’t generate its own magnetotail), but by the sun’s magnetic field carried by the solar wind. This process can be understood as the field lines wrapping around an obstacle — Venus in this case.

Venus Express carries multiple instruments to observe the Venusian atmosphere and surface. Working with the Venus Radio Science team, Candace Gray found that higher energy electrons are entering the Venusian nightside atmosphere. They noted activity low in Venus’ ionosphere that suggested the “excited oxygen” – the possible cause of Venus auroras – might be produced there. Gray said that, although the exact chemistry causing the emission is largely unknown:

These are intriguing results, suggesting that it is possible to have aurora on non-magnetic planets

However, this may be unique to Venus because it is so close to the Sun at 0.7 AU. At that distance, the solar storms are so strong that it may not matter if there’s not planetary magnetic field, the charged particles would be deposited all over the planet, producing auroras at every latitude. It would be interesting to see if Mars, another non-magnetic planet with a CO2 atmosphere that is further away from the sun, shows similar results.

Gray now proposes to compare the atmospheric response of Mars and Venus after major CME impacts to see how each planet responds to strong solar storms. While she will be using data from Mars Express, information from the new Martian spacecraft Mars Atmosphere and Volatile EvolutioN (MAVEN) will be invaluable. MAVEN has just entered into orbit around Mars and will be studying its atmosphere, including any possible aurora that may be generated after CME impacts.

So the final word on Venus auroras isn’t in yet. But, with the painstaking work of astronomers, multiple clues are now shedding increased light on a process whereby Venus auroras – even the absence of a magnetic field – appear to be possible. 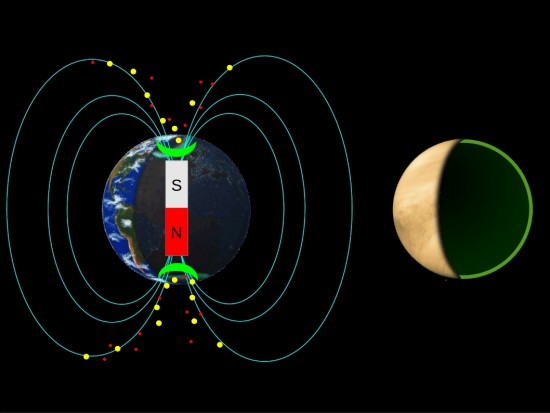 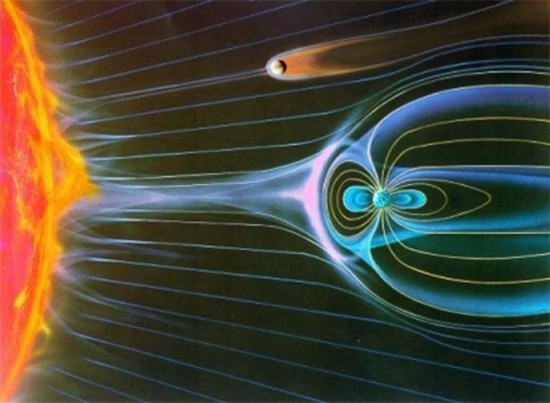 Bottom line: For 40 years, astronomers have puzzled over signs of a green aurora on Venus, despite the planet’s lack of a magnetic field. This post describes recent work suggesting that, indeed, Venus may be able to produce green auroras in its lower ionosphere. The exact mechanism by which the auroras may be produced is still unknown.