What is ULX-4 – a mystery green blob of X-ray light that appeared in the Fireworks Galaxy – and then soon disappeared again? A black hole or neutron star are 2 possibilities. 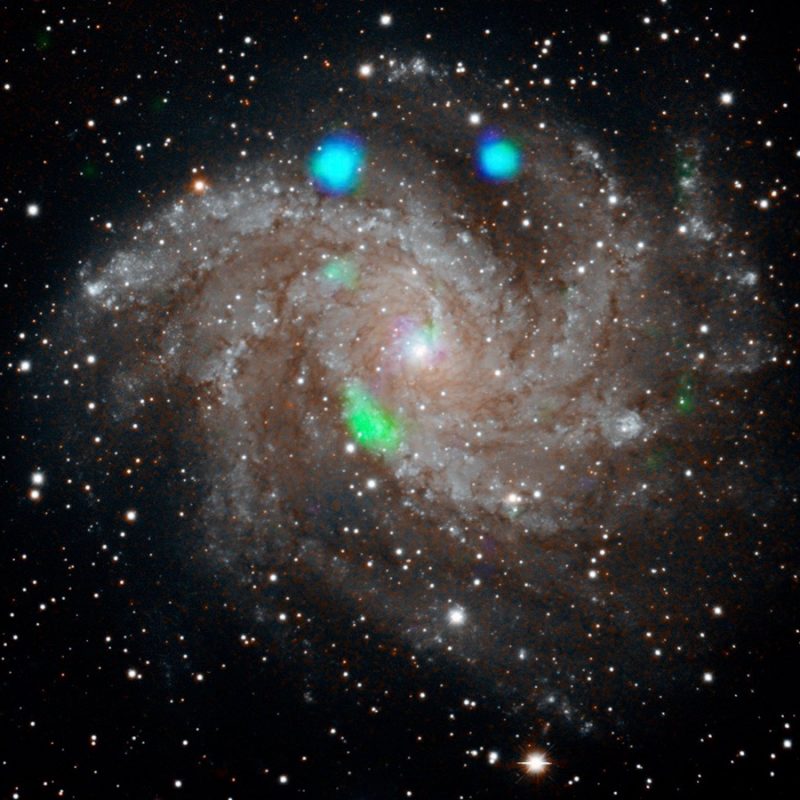 This visible-light image of the Fireworks Galaxy (NGC 6946) comes from the Sloan Digital Sky Survey. It’s overlaid with data from NASA’s NuSTAR X-ray telescope (in blue and green). The mystery green blob is toward the middle of the galaxy, apparently coincident with one of its spiral arms. Image via NASA/JPL-Caltech.

The universe is full of mysteries, and now there’s a new one for astronomers to puzzle over. A space-based X-ray observatory – NASA’s NuSTAR – saw what astronomers described as a green blob in the galaxy known as NGC 6946, aka the Fireworks Galaxy. The blob appeared within a 10-day period and then disappeared again just as quickly.

A new peer-reviewed paper discussing the intriguing finding was published in The Astronomical Journal on August 9, 2019.

It’s really unusual for a celestial object to appear and then vanish again over such a short time period. The object was given the label ULX-4, as it was the fourth ULX – ultraluminous X-ray source – found in that galaxy.

NuSTAR’s primary mission at the time had been to study a supernova in the galaxy, which appears as a bright blue-green spot in the upper right of the image above. The mystery green blob is closer to the galaxy’s center in the image, apparently coincident with one of its spiral arms. 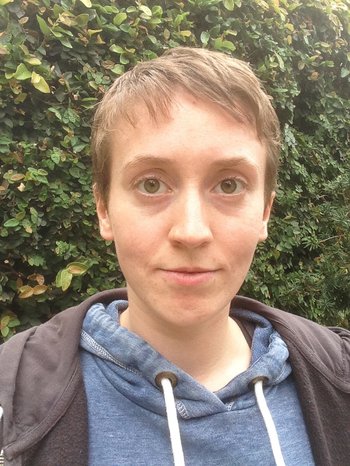 Hannah Penn Earnshaw is a postdoctoral scholar in physics at Caltech. She’s lead author of the new study about the mystery green blob. Image via Caltech.

The mystery object probably isn’t a supernova, however, because it was only detected in X-ray but not visible light images. It had first been seen by NuSTAR, and then later was found to have disappeared by NASA’s Chandra X-ray Observatory.

One of the main questions right now is how the object appeared and disappeared so quickly. According to Hannah Earnshaw, a postdoctoral researcher at Caltech:

Ten days is a really short amount of time for such a bright object to appear. Usually with NuSTAR, we observe more gradual changes over time, and we don’t often observe a source multiple times in quick succession. In this instance, we were fortunate to catch a source changing extremely quickly, which is very exciting.

So if the object isn’t a supernova, then what is it? 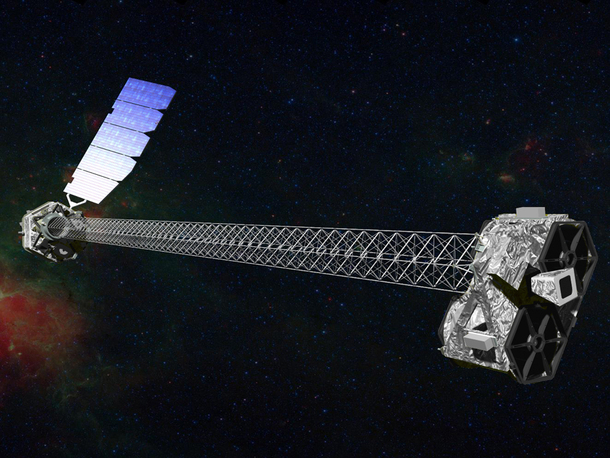 Artist’s concept of the NuSTAR spacecraft. Image via NASA/JPL-Caltech.

One possibility is that it is a black hole. According to that theory, the greenish light came from a black hole that was consuming another object, perhaps a star. We tend to think of black holes as “sucking in” material, but the immense gravity from the black hole could also rip the object apart, with the resulting debris going into orbit around the black hole. That debris can be heated to millions of degrees, emitting X-rays. So even though light can’t escape from inside a black hole, the light emitted by super-heated debris orbiting the black hole can easily be seen.

Usually, ULXs are long-lived, since black holes will feed for a long time on the stars they destroy. But if, say, a small star is destroyed more quickly, then that could explain short-term events like ULX-4.

ULX-4 could also possibly be a neutron star, an extremely dense object that forms when a star explodes, but isn’t massive enough to create a black hole. They can also have disks of debris orbiting them, creating slow-feeding ultraluminous X-ray sources. Material is channeled down to the surface in “columns” by powerful magnetic fields. But material can be blocked by those magnetic fields from reaching the surface if the neutron star is spinning too fast. 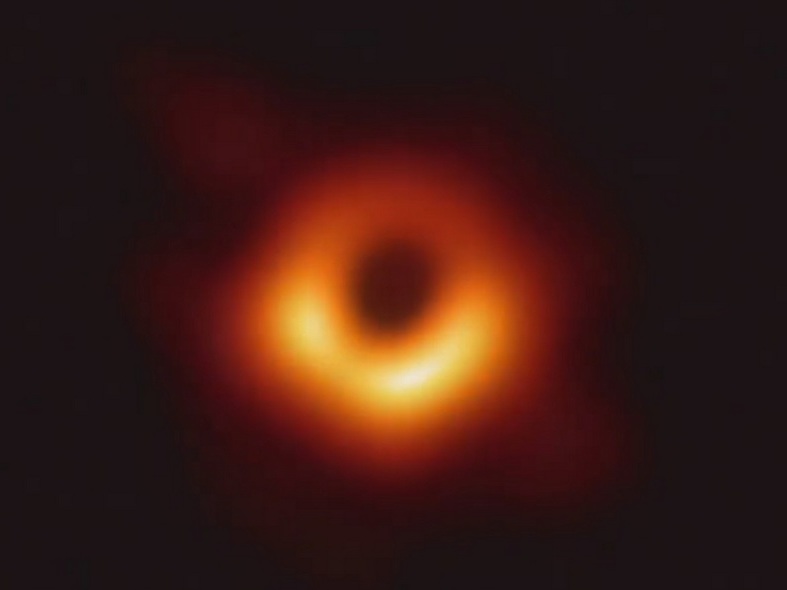 One possible explanation for ULX-4 is that it is a black hole. This image is the first black hole ever photographed, in the center of the galaxy M87. Image via Event Horizon Telescope/JPL-Caltech.

The only times you would then see the neutron star as a bright source of X-rays would be at the moment when the magnetic field barrier wavers a bit. This could explain the sudden appearance and disappearance of the light coming from ULX-4. According to Earnshaw:

It would kind of be like trying to jump onto a carousel that’s spinning at thousands of miles per hour. This result is a step towards understanding some of the rarer and more extreme cases in which matter accretes onto black holes or neutron stars.

Further observations will be needed to determine which of these theories – if either of them – is the right one. There may still turn out to be a different explanation altogether. Space is full of weird and mysterious phenomena, and “the case of the appearing and disappearing green blob” is certainly an odd one! 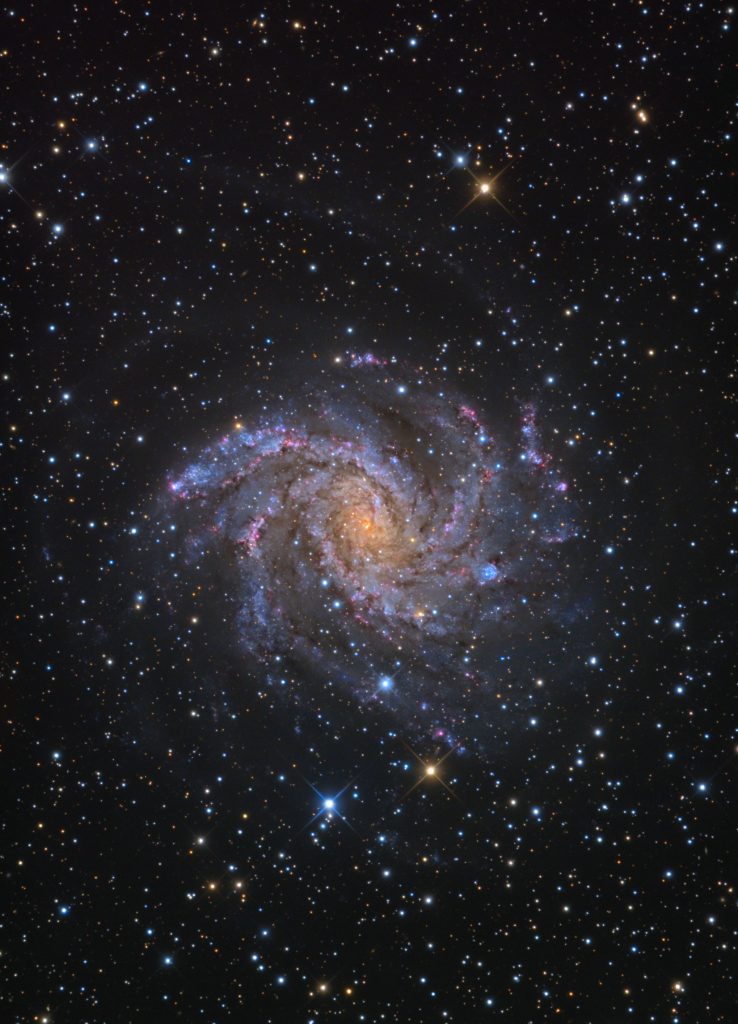 Another view of the beautiful Fireworks Galaxy. This one was posted as an Astronomy Picture of the Day on January 1, 2011. Image via Adam Block/Mt. Lemmon SkyCenter/U. Arizona/APOD.

Bottom line: A mysterious “green blob” of light appeared in the Fireworks Galaxy, and then just as quickly disappeared again.

Source: A Broadband Look at the Old and New ULXs of NGC 6946