The Dawn spacecraft has made history. It has become the first mission to visit a dwarf planet when it successfully slipped into Ceres’ orbit on March 6. 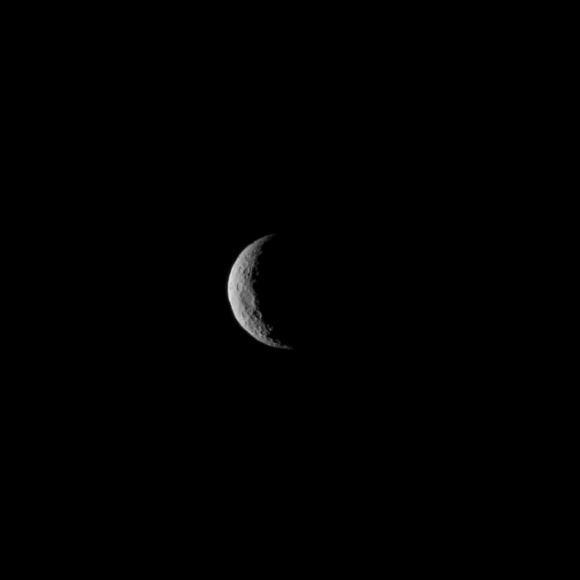 Ceres is seen from NASA’s Dawn spacecraft on March 1, just a few days before the mission achieved orbit around the previously unexplored dwarf planet. The image was taken at a distance of about 30,000 miles (about 48,000 kilometers). Image credit: NASA/JPL-Caltech/UCLA/MPS/DLR/IDA

Mission controllers at NASA’s Jet Propulsion Laboratory (JPL) in Pasadena, California received a signal from the spacecraft at 5:36 a.m. PST (8:36 a.m. EST) that Dawn was healthy and thrusting with its ion engine, the indicator Dawn had entered Ceres’ orbit as planned.

Ceres, the Texas-sized dwarf planet, has never before been visited by a spacecraft. Ceres is the largest and most massive object in the main asteroid belt, between the orbits of Mars and Jupiter.

The NASA spacecraft launched nine years ago, in September 2007. Dawn explored the giant asteroid Vesta for 14 months in 2011 and 2012, capturing detailed images and data about that body. began it’s final approach to Ceres in December, 2014. Since January 25, Dawn has been delivering the highest-resolution images of Ceres ever captured, and they will continue to improve in quality as the spacecraft approaches.

Dawn is about to make history. Our team is ready and eager to find out what Ceres has in store for us.

This image was taken by NASA’s Dawn spacecraft of dwarf planet Ceres on Feb. 19 from a distance of nearly 29,000 miles (46,000 kilometers). It shows that the brightest spot on Ceres has a dimmer companion, which apparently lies in the same basin. Image credit: NASA/JPL-Caltech/UCLA/MPS/DLR/IDA

Recent images show numerous craters and unusual bright spots that scientists believe tell how Ceres, the first object discovered in our solar system’s asteroid belt, formed and whether its surface is changing. As the spacecraft spirals into closer and closer orbits around the dwarf planet, researchers will be looking for signs that these strange features are changing, which would suggest current geological activity.

We’re going to have a blackout for the next month, until we get back over toward the lit side. But then the floodgates are really going to open when we get to our first science orbit in late April.

The most recently released images of the dwarf planet Ceres from NASA’s Dawn spacecraft reveal that a mysterious bright spot – a stand out in previous images – lies close to yet another bright area. Both bright spots appear to lie within the walls of a crater on Ceres. The spacecraft acquired the image above on February 19, 2015 at a distance of nearly 29,000 miles (46,000 kilometers) from Ceres.

What are these bright spots on Ceres? Scientists aren’t sure. Andreas Nathues at the Max Planck Institute for Solar System Research, said:

The brightest spot continues to be too small to resolve with our camera, but despite its size it is brighter than anything else on Ceres. This is truly unexpected and still a mystery to us.

Chris Russell is principal investigator for the Dawn mission. He said:

Ceres’ bright spot can now be seen to have a companion of lesser brightness, but apparently in the same basin. This may be pointing to a volcano-like origin of the spots, but we will have to wait for better resolution before we can make such geologic interpretations. 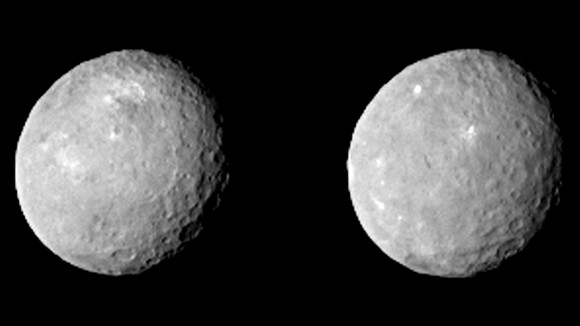 NASA’s Dawn spacecraft acquired these two views of Ceres on February 12 from a distance of about 52,000 miles (83,000 kilometers). The view changed as the dwarf planet rotated. At the time of capture, this was part of a series of the highest-resolution images of Ceres ever taken. Image via NASA/JPL-Caltech/UCLA/MPS/DLR/IDA

The images will continuously improve as the spacecraft approaches Ceres and finally is gently captured into orbit around it. As Dawn spirals closer to Ceres’ surface during its 16-month study of the dwarf planet, the spacecraft will deliver images and other data to the science team investigating the nature and composition of the dwarf planet – including the nature of the craters and bright spots that are coming into focus.

Sicilian astronomer Father Giuseppe Piazzi spotted Ceres in 1801. As more such objects were found in the same region, they became known as asteroids, or minor planets. Ceres was initially classified as a planet and later called an asteroid. In recognition of its planet-like qualities, Ceres was designated a dwarf planet in 2006, along with Pluto and Eris.

Bottom line: Images taken of Ceres on February 19, 2015 at a distance of nearly 29,000 miles (46,000 kilometers) by cameras aboard NASA’s Dawn spacecraft reveal that a bright spot that stands out in previous images lies close to yet another bright area.

Read more about the Dawn mission from NASA