Was moon created from proto-Earth magma?

A new study suggests that our moon formed from a splash of magma when a large object crashed into a proto-Earth covered in a fiery ocean.

Animation simulating an object’s collision with a magma-covered proto-Earth, resulting in the formation of the moon. Via 2019 Natsuki Hosono, Hirotaka Nakayama, 4D2U Project, Naoj

For more than a century, scientists have struggled to explain how the Earth’s moon formed. The most widely-accepted explanation is that the moon formed from the debris left over after a Mars-sized object, known as Theia, slammed into the early Earth and ejected enough debris to form the moon.

The problem is that when this idea was tested, computer simulations indicated that the moon would be made primarily from the same stuff as the impacting object. Yet the opposite is true. We know from analyzing rocks brought back from Apollo missions that the moon consists mainly of material from Earth.

A new study published April 29, 2019, in Nature Geoscience by a team of scientists from Japan and the U.S. has offered an explanation for the discrepancy.

The key, according to Yale geophysicist Shun-ichiro Karato, who is a study co-author, is that the early, proto-Earth — about 50 million years after the formation of the sun — was covered by a sea of hot magma, while the impacting object was likely made of solid material. The impact splashed magma out into space, and that material formed the moon. 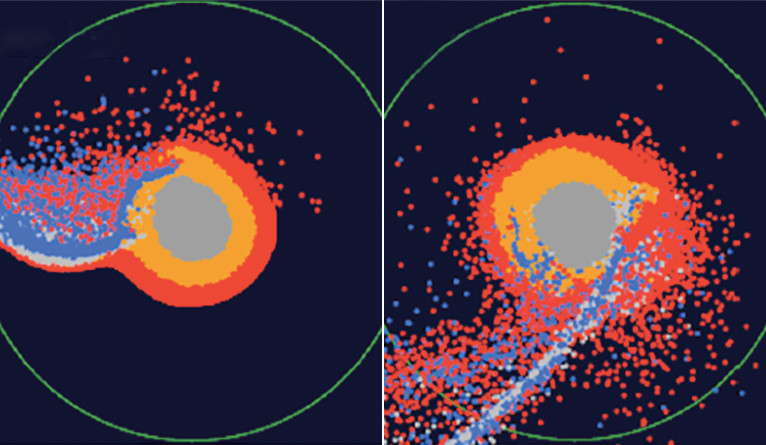 Karato and his collaborators set out to test a new model, based on the collision of a proto-Earth covered with an ocean of magma and a solid impacting object.

The model showed that after the collision, the magma is heated much more than solids from the impacting object. The magma then expands in volume and goes into orbit to form the moon, the researchers say. This explains why there is much more Earth material in the moon’s makeup. Previous models did not account for the different degree of heating between the proto-Earth silicate and the impactor.

Karato said in a statement:

Karato said the new model confirms previous theories about how the moon formed, without the need to propose unconventional collision conditions — something theorists have had to do until now.

Bottom line: The moon formed from a splash of magma when a large object crashed into a proto-Earth covered in a fiery ocean, according to a new study.