Chorus waves can be converted to sound. The ones around Earth sound like singing or chirping birds. Jupiter has stronger chorus waves, and now its large moon – Ganymede – has been found to have chorus waves a million times stronger than Jupiter’s. 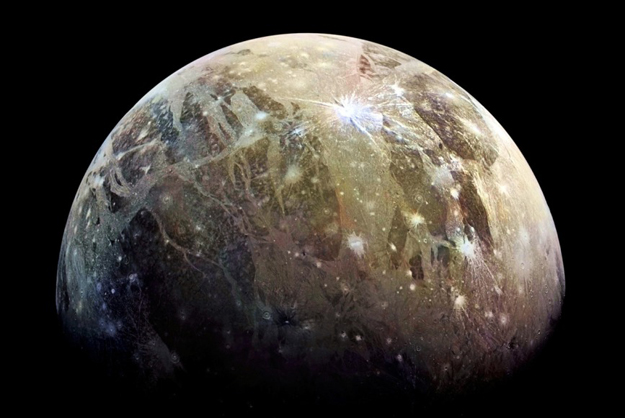 Ganymede as seen by the Galileo spacecraft. Scientists have now found that the largest moon of Jupiter has chorus waves like Earth, but vastly more powerful. Image via NASA.

Chorus waves are electromagnetic waves that can be converted to sound. When that’s done, and we “hear” the chorus waves around Earth, they sound like singing or chirping birds. Chorus waves can also produce beautiful auroras at the poles of a planet. In addition to Earth, they can be found around Jupiter’s moons Europa and Ganymede, as well as Saturn. On August 7, 2018 – as reported in a new peer-reviewed paper in Nature Communications – astronomers expressed surprise at the finding that the chorus waves around Ganymede, Jupiter’s largest moon, are a million times more intense than around Jupiter itself.

As Yuri Shprits of GFZ/University of Potsdam, lead author of the new study explained in ScienceDaily:

It’s a really surprising and puzzling observation showing that a moon with a magnetic field can create such a tremendous intensification in the power of waves. 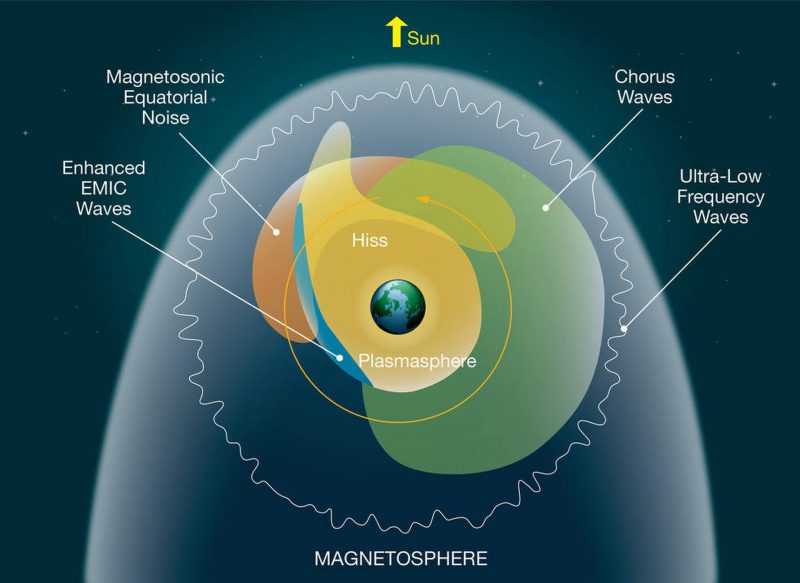 Understanding of wave environments is critical for the understanding of how particles are accelerated and lost in space. This study shows that in the vicinity of Europa and Ganymede, that respectively have induced and internal magnetic fields, chorus wave power is significantly increased. The observed enhancements are persistent and exceed median values of wave activity by up to six orders of magnitude for Ganymede. Produced waves may have a pronounced effect on the acceleration and loss of particles in the Jovian magnetosphere and other astrophysical objects. The generated waves are capable of significantly modifying the energetic particle environment, accelerating particles to very high energies, or producing depletions in phase space density. Observations of Jupiter’s magnetosphere provide a unique opportunity to observe how objects with an internal magnetic field can interact with particles trapped in magnetic fields of larger scale objects.

While the chorus waves, also known as whistler-mode chorus waves, are similar to those around Earth, they are much more powerful – one million times, or six orders of magnitude, more intense than the average level around Jupiter. According to Professor Richard Horne of the British Antarctic Survey, a co-author on the study:

Chorus waves have been detected in space around the Earth but they are nowhere near as strong as the waves at Jupiter. 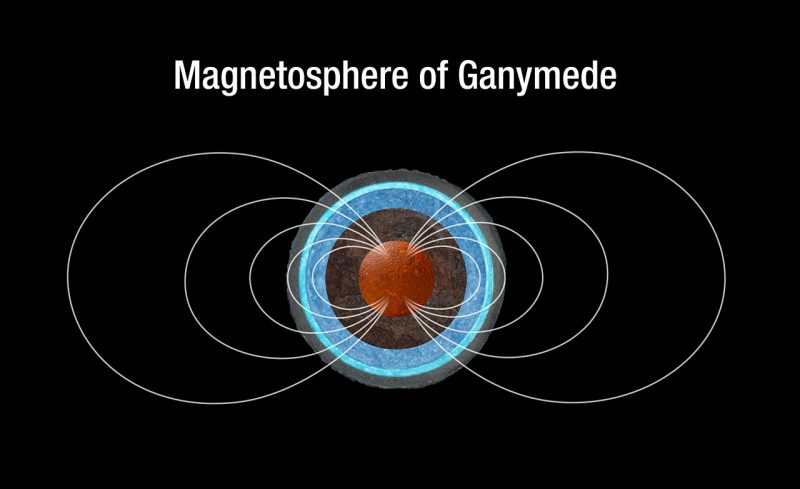 The magnetosphere of Ganymede, which also contains chorus waves much more intense than those around Earth. Image via NASA/ESA/A. Feild (STScI).

The study also found that the chorus waves are about 100 times more intense near Europa – that’s a lot less than Ganymede, but still significant. These new results are based on data from the old Galileo mission to Jupiter (1995-2003).

Chorus waves, a type of plasma wave, occur at very low frequencies; they can cause auroras (northern lights) on Earth and can damage satellites by emitting high-energy “killer” electrons. But why are the ones near Ganymede so much more powerful? Scientists think it has to do with the fact that Ganymede and Europa both orbit inside the strong magnetic field of Jupiter, which could amplify the waves. Jupiter’s magnetic field is 20,000 times more intense than Earth’s. According to Horne:

Chorus waves have been detected in space around the Earth but they are nowhere near as strong as the waves at Jupiter. Even if a small portion of these waves escapes the immediate vicinity of Ganymede, they will be capable of accelerating particles to very high energies and ultimately producing very fast electrons inside Jupiter’s magnetic field.

Ganymede also has its own magnetic field, and strong plasma waves were first observed near Ganymede by Don Gurnett and his team at the University of Iowa. 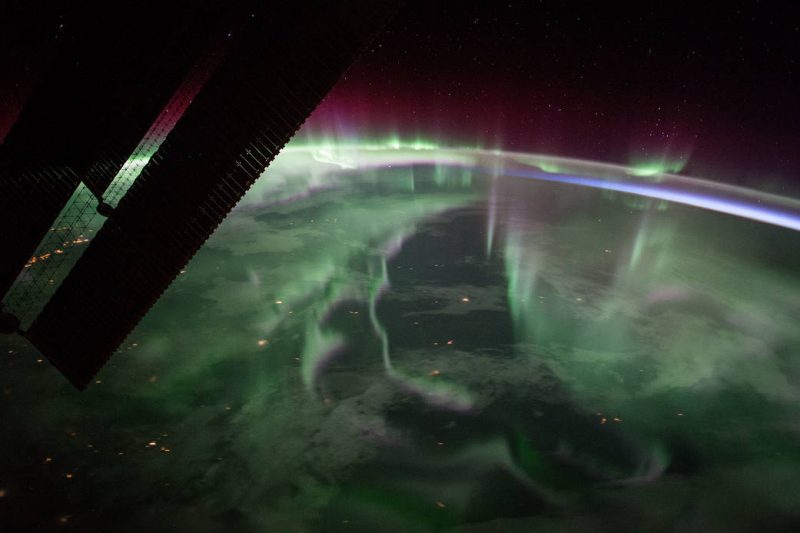 The northern lights, produced by chorus waves, over Canada as seen from the International Space Station. Image via NASA.

The new findings about Ganymede’s chorus waves may also be applicable to planets and moons outside of our solar system, and could help astronomers detect magnetic fields around exoplanets. From the paper:

Bottom line: Chorus waves, already well-known on Earth, have been found on Jupiter’s largest moon Ganymede, and they are much more intense than any seen elsewhere before. They may also help astronomers find magnetospheres and magnetic fields on distant exoplanets.