Through 12 years of photographing and stitching together individual astrophotography images, Finnish astrophotographer J-P Mestavainio has created a 1.7 gigapixel panorama of our Milky Way galaxy. 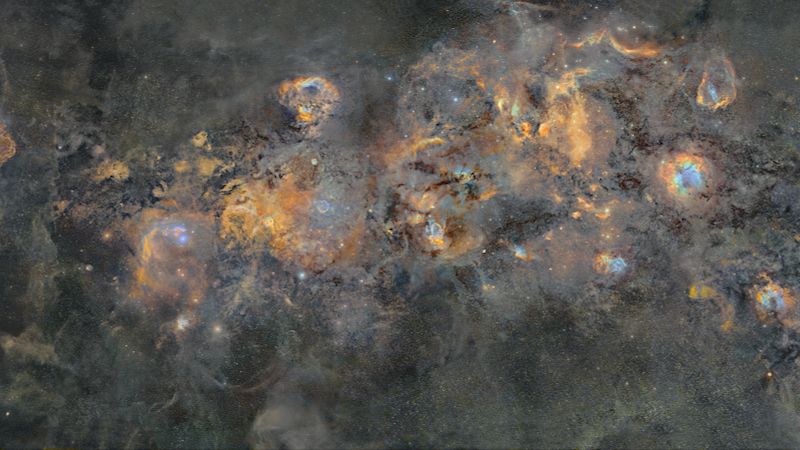 J-P Metsavainio is a Finnish astrophotographer who released his mega-project on March 16, 2021: a stunning mosaic of our Milky Way galaxy stretched out across the night sky. Metsavainio wrote at his blog:

It took nearly twelve years to collect enough data for this high resolution gigapixel class mosaic image of the Milky Way. Total exposure time used is around 1,250 hours between 2009 and 2021.

He accomplished it all using his own small observatory in Oulu, Finland, with only a 12-inch telescope and photographic equipment. Metsavainio’s Milky Way panorama consists of 234 individual images, each created in its own right as a piece of artwork. Together, these hours translate to a 1.7 gigapixel image, 100,000 pixels across. 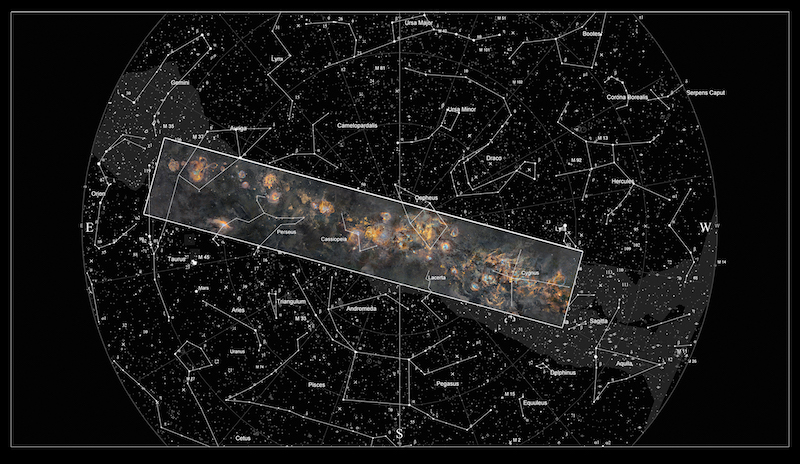 View larger. | The Milky Way panorama final image stretches over 125 degrees of sky. Metsavainio made this photo mosaic using special filters, only letting certain wavelengths through. As a result, the colors you can see in this image come from light emitted by 3 ionized elements, meaning elements that have lost one or more electrons in their atoms; hydrogen (H-alpha), sulphur (S II) and oxygen (O III). Image via J-P Metsavainio.

Outlines of the 234 individual images, photographed for a total of 1,250 hours, that Metsavainio used to create his panorama. Image via J-P Metsavainio.

Metsavainio told EarthSky how it all started:

I decided to make a large mosaic image of the Milky Way over 10 years ago. A the time I was aware that it’d take least a decade to be finalized (and the work is still ongoing). As a visual artist, the composition of the image means a lot to me. During the years I have shot hundreds of individual targets from the Milky Way. Each image taken is an independent artwork. At the same time I always kept in my mind the needs of the final large composition. This is like having a short-term plan in action, but at the same time having a long-term plan behind everything. 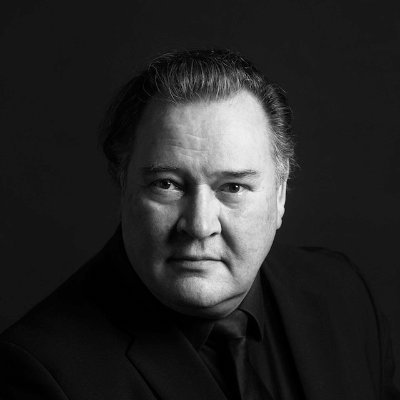 Metsavainio’s project has recently caught a lot of attention, and rightly so. The extreme detail and depth is reminiscent of Hubble Space Telescope images. 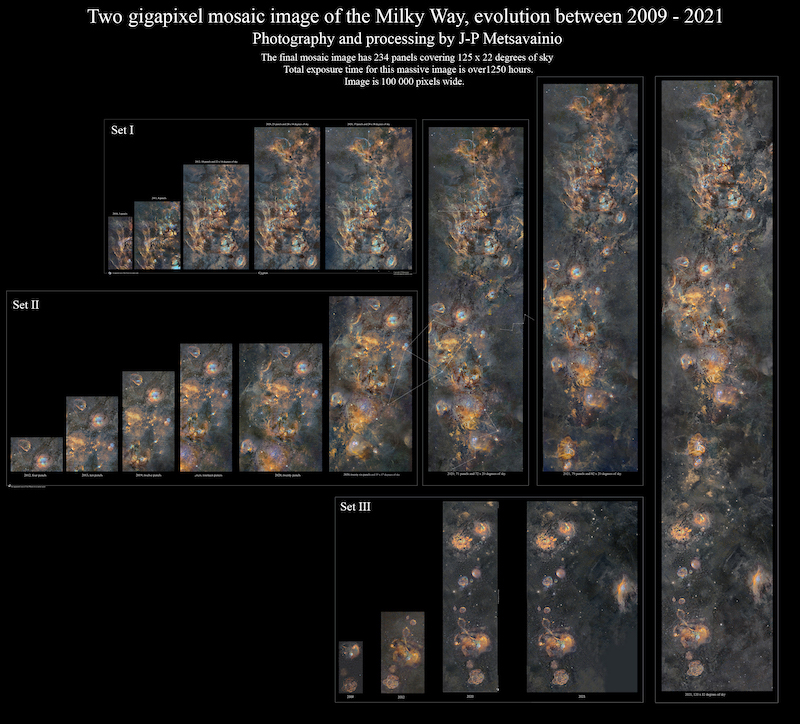 An illustration of how the panorama was mosaicked together, over time. Image via J-P Metsavainio.

Metsavainio’s observatory is located in the center of his hometown of Oulu on the west coast of Finland, and thus subject to a fair amount of light pollution. This is the reason why he filters the light and measures so-called narrow-band emissions; that is, he just lets the light through narrow windows at specific optical wavelengths – at the wavelengths of ionized hydrogen (H-alpha), sulphur and oxygen (S II and O III).

Metsavainio created these images with art in mind first, but in a scientific manner. He told EarthSky:

I have no scientific ambitions but my photos are fulfilling the rules of scientific imaging. They have been used in some scientific purposes before and have that kind of value too. As a visual artist, I like to give people a visual experience, even if they have no idea what they are looking at.

And the line between science and art can indeed be fine at times, especially when it comes to astrophotography. For example, NASA’s Astronomy Picture of the Day (APOD) has featured many of Metsavainio’s images, explaining the science that can be seen in each (recent examples here and here).

We highly recommend visiting J-P Metsavainio’s webpage to delve into a high-resolution version of his Milky Way panorama and the images forming it, as well as for more details on how he put this project together.

Following are two closeups of regions in the great panorama: 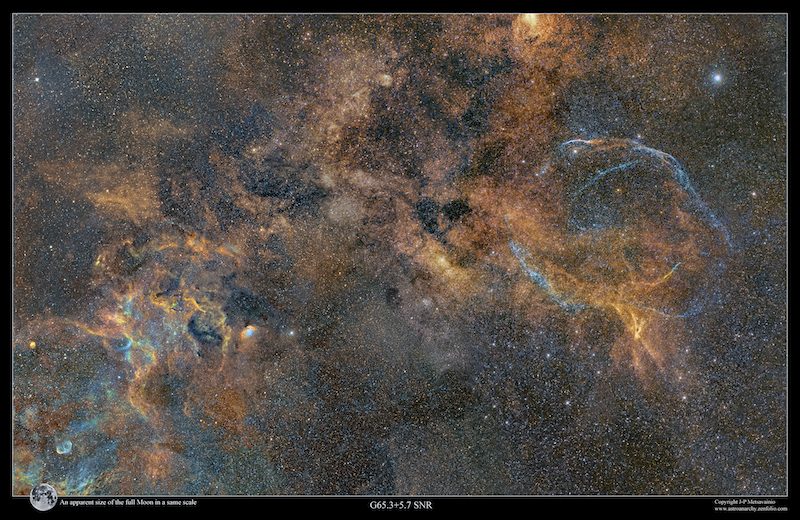 The bow-fronts arching around a region where once a star exploded are visible on the right side of this image. The supernova remnant is called G65.3+5.7 and this image required 60 hours of exposure time. The moon at the bottom left shows the scale of this image. Image via J-P Metsavainio. 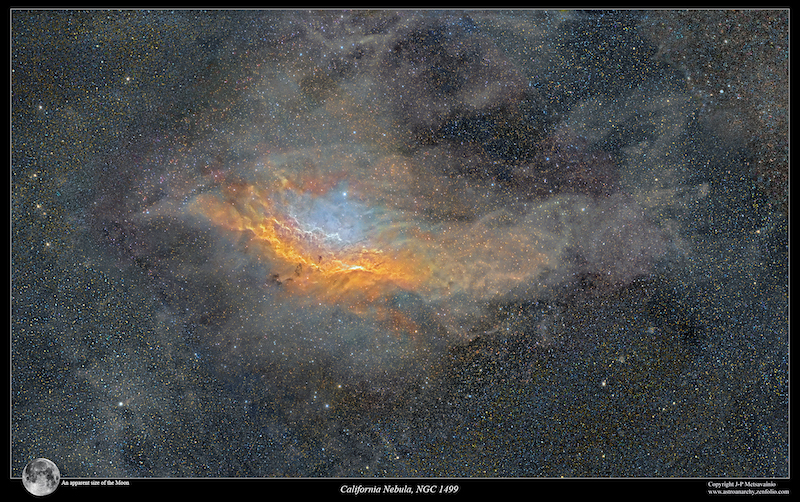 The California Nebula, which got its name because it resembles the state of California, is located in the bottom left of the great panorama image. The moon (below, left) shows the scale of this image. Image via J-P Metsavainio. 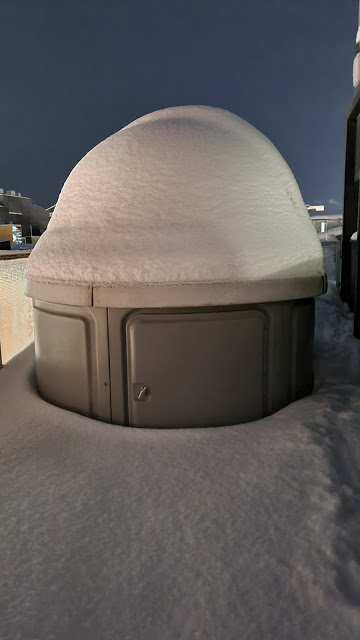 With simple tools, great results can be achieved. Metsavainio used this small observatory in the middle of the Finnish city Oulu to observe the Milky Way. Image via J-P Metsavainio.