At least! Six other objects could be either dwarf galaxies or globular clusters. These humble Milky Way satellites are a key to the dark matter puzzle. 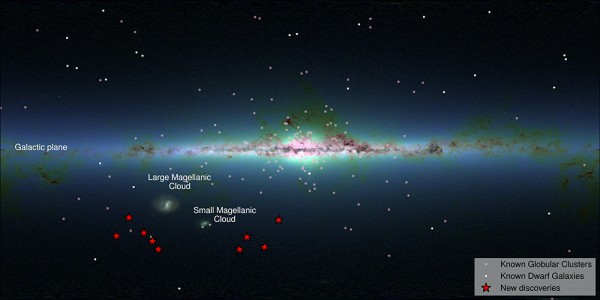 A team of astronomers from the University of Cambridge says it has identified nine new objects – three definite small galaxies and six either galaxies or globular clusters – orbiting our Milky Way galaxy. They say it’s the largest number of small objects orbiting the Milky Way ever discovered at once. Nine does sound like a lot, given that our Milky Way galaxy has only about 150 known globular clusters, and only a couple of dozen possible satellite galaxies, with the irregular Large and Small Magellanic Clouds – visible from Earth’s Southern Hemisphere – being the best known. These objects were found via newly-released imaging data taken from the Dark Energy Survey. The astronomers say these humble objects orbiting our Milky Way might help unravel the some of the mysteries behind dark matter. In a statement released on March 10, 2015, the University of Cambridge also said:

The new results also mark the first discovery of dwarf galaxies – small celestial objects that orbit larger galaxies – in a decade, after dozens were found in 2005 and 2006 in the skies above the Northern Hemisphere. 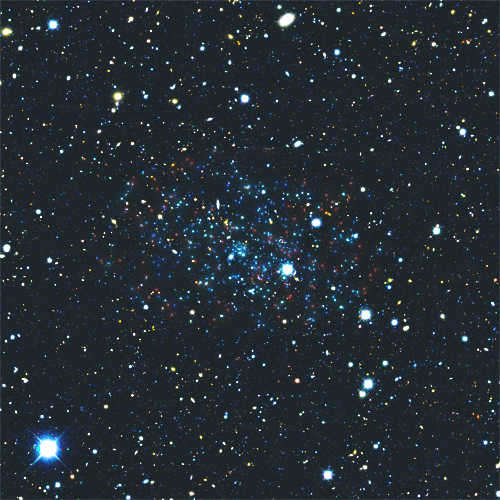 Eridanus-1, one of the three most visible of the newly discovered objects orbiting our Milky Way. Image via V. Belokurov, S. Koposov (IoA, Cambridge).

The discovery of so many satellites in such a small area of the sky was completely unexpected. I could not believe my eyes.

In recent years, the couple of dozen Milky Way satellite galaxies have puzzled astronomers. The number of known dwarf galaxies orbiting our Milky Way is not as large as scientists believe it should be, based on computer simulations. The most accepted cosmological models of the universe predict there should be hundreds of dwarf galaxies in orbit around our Milky Way. But, so far, we haven’t seen hundreds.

The University of Cambridge astronomers take a more observational approach. They say the dimness and small size of the Milky Way’s satellite galaxies simply makes them “incredibly difficult to find.” 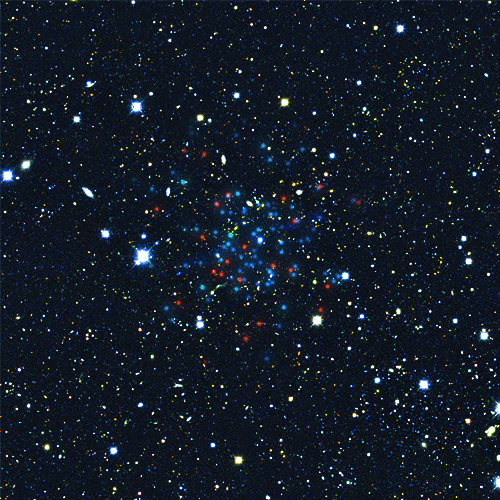 But finding them – or finding some reason why they aren’t there after all – is important to astronomers. That’s because these dwarf galaxies contain up to 99 percent dark matter and just one percent observable matter.

In our universe as a whole, dark matter is thought to make up 25 percent of all the matter and energy in our universe. We can’t see it, and it hasn’t been detected directly by earthly detectors, but astronomers know it exists via the gravitational pull it exerts. If you were an astronomer, could you resist such a puzzle? These astronomers can’t resist it either.

The Dark Energy Survey – which began in August 2013 and will continue for five years – wasn’t designed specifically to discover Milky Way satellites. The survey is photographing a large portion of the southern sky out to vast distances. It’s accomplishing that via its primary tool is the Dark Energy Camera, a 570-megapixel camera, which can see incredibly faint objects out to eight billion light-years from Earth. The ultimate goal of the Dark Energy Survey is to probe the origin of the accelerating universe. According to the statement released March 10, it’s doing this by:

* Counting galaxy clusters. While gravity pulls mass together to form galaxies, dark energy pushes it apart. The Dark Energy Camera will see light from 100,000 galaxy clusters billions of light-years away. Counting the number of galaxy clusters at different points in time sheds light on this cosmic competition between gravity and dark energy.

* Measuring supernovae. A supernova is a star that explodes and becomes as bright as an entire galaxy of billions of stars. By measuring how bright they appear on Earth, scientists can tell how far away they are. This information can be used to determine how fast the universe has been expanding since the star’s explosion. The survey will discover 4,000 of these supernovae, which exploded billions of years ago in galaxies billions of light-years away.

* Studying the bending of light. When light from distant galaxies encounters dark matter in space, it bends around the matter, causing those galaxies to appear distorted in telescope images. The survey will measure the shapes of 200 million galaxies, revealing the cosmic tug of war between gravity and dark energy in shaping the lumps of dark matter throughout space.

* Using sound waves to create a large-scale map of expansion over time. When the universe was less than 400,000 years old, the interplay between matter and light set off a series of sound waves travelling at nearly two-thirds the speed of light. Those waves left an imprint on how galaxies are distributed throughout the universe. The survey will measure the positions in space of 300 million galaxies to find this imprint and use it to infer the history of cosmic expansion.

Because it can see such faint objects, the Dark Energy Survey is now coincidently probing the dark matter puzzle as it relates to the Milky Way’s dwarf satellite galaxies. Vasily Belokurov of the Institute of Astronomy, one of the study’s co-authors, said:

Dwarf satellites are the final frontier for testing our theories of dark matter. We need to find them to determine whether our cosmological picture makes sense.

Finding such a large group of satellites near the Magellanic Clouds was surprising, though, as earlier surveys of the southern sky found very little, so we were not expecting to stumble on such treasure.

Read more about this study from University of Cambridge 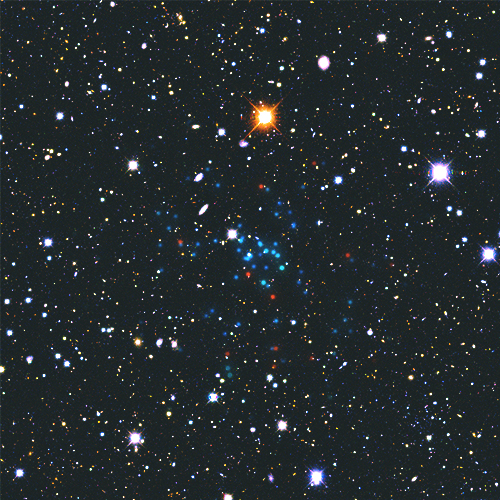