An ancient starburst in the Milky Way’s center

New observations reveal that – about a billion years ago – the center of our Milky Way galaxy underwent a period of intense star formation, resulting in over 100,000 supernovae.

Detailed images of our Milky Way galaxy’s central region, obtained by astronomers using the Very Large Telescope (VLT) in Chile’s Atacama Desert, reveal that the galactic center underwent an intense period of star formation about a billion years ago. As the most massive stars in this burst of star formation came of age, the result was over a hundred thousand stars exploding as supernovae. The new findings were published in December 2019 in the peer-reviewed journal Nature Astronomy (published article here, and preprint here).

An earlier related article was published in the journal Astronomy & Astrophysics in October 2019 (published article here and preprint here).

The VLT is operated by the European Southern Observatory (ESO). A statement from ESO quoted Rainer Schödel of the Institute of Astrophysics of Andalusia in Granada, Spain, who led the observations. He said:

Our unprecedented survey of a large part of the galactic center has given us detailed insights into the formation process of stars in this region of the Milky Way.

Francisco Nogueras-Lara, who led the two new studies of the Milky Way central region while at the same institute in Granada, added:

Contrary to what had been accepted up to now, we found that the formation of stars has not been continuous.

In these new studies, according to their statement, the astronomers found that: 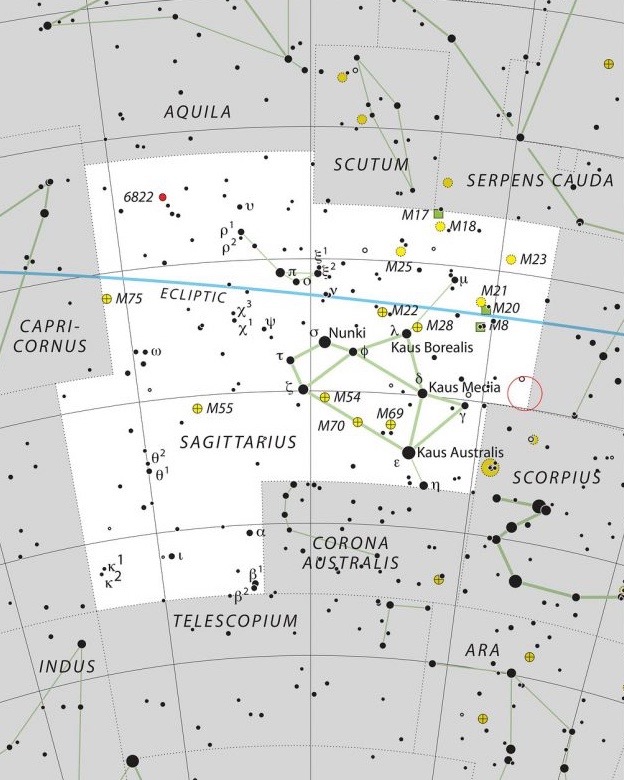 This chart shows the location of the Milky Way central region in the night sky. It lies in the direction of the constellation of Sagittarius the Archer, and is marked with a red circle in the image. Via ESO/ IAU/ Sky & Telescope.

Nogueras-Lara, now based at the Max Planck Institute for Astronomy in Heidelberg, Germany, added:

The conditions in the studied region during this burst of activity must have resembled those in ‘starburst’ galaxies, which form stars at rates of more than 100 solar masses per year.

This burst of activity, which must have resulted in the explosion of more than a hundred thousand supernovae, was probably one of the most energetic events in the whole history of the Milky Way.

At present, the whole Milky Way is forming stars at a rate of about one or two solar masses per year.

During a starburst, many massive stars are created; since they have shorter lifespans than lower-mass stars, they reach the end of their lives much faster, dying in violent supernova explosions.

Taken with the HAWK-I instrument on ESO’s Very Large Telescope in the Chilean Atacama Desert, this stunning image shows the Milky Way’s central region with an angular resolution of 0.2 arcseconds. This means the level of detail picked up by HAWK-I is roughly equivalent to seeing a soccer ball (football) in Zurich, Switzerland, from Munich, Germany, where ESO’s headquarters are located. Read more about this image. Image via ESO/ Nogueras-Lara et al.

Source: The nuclear disc of the Milky Way: Early formation, long quiescence, and starburst activity one billion years ago