Milky Way could be catapulting stars into its outer halo

Scientists used computer simulations to learn that our Milky Way galaxy may sometimes launch newly forming stars into the space around itself – that is, into the halo of our galaxy – via outflows triggered by supernova explosions. 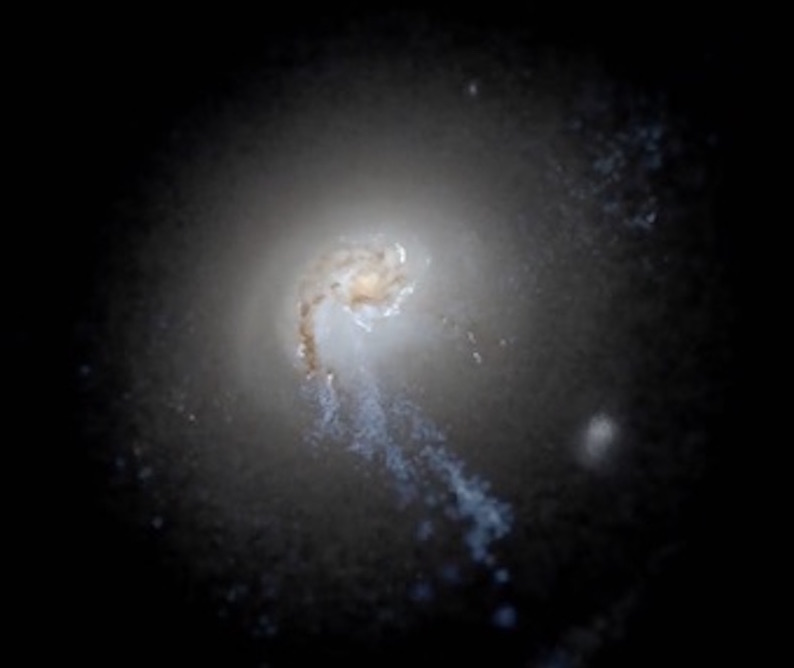 This isn’t a real galaxy. Instead, it’s part of a super-powerful computer simulation of our own galaxy, the Milky Way. In this simulated image, the “arm” you see extending out from the center spans more than 200,000 light-years. That’s wider than the Milky Way itself! The structure shows the prominent plumes of young blue stars, born in gas that was blown outward by supernova explosions. Read more. Image via Sijie Yu/ UCI.

Though mighty, the Milky Way and galaxies of similar mass are not without scars chronicling turbulent histories.

So say scientists at the University of California, Irvine, who used the “hyper-realistic, cosmologically self-consistent” computer simulations generated via the FIRE-2 collaboration (FIRE stands for Feedback in Realistic Environments) to model our Milky Way galaxy’s rotation over time. In this way, they’ve learned that our galaxy may sometimes launch newly forming stars into the space around itself – that is, into the halo of our galaxy – via outflows triggered by supernova explosions.

UC Irvine physicist Sijie Yu is lead author of this new study, which was published in March 2020 in the peer-reviewed Monthly Notices of the Royal Astronomical Society. Yu said the findings were made possible partly by the availability of a powerful new set of computing tools. She said in a statement:

The FIRE-2 simulations allow us to generate movies that make it seem as though you’re observing a real galaxy.

They show us that as the galaxy center is rotating, a bubble driven by supernova[s] is developing, with stars forming at its edge. It looks as though the stars are being kicked out from the center.

Here’s an example of one of the movies from the FIRE-2 simulations:

Visualization of one of the outflow events discovered in one of the FIRE-2 simulations. Left is the mock starlight movie, consisting of mock Hubble Space Telescope-type images (blue shows sites of young star formation, red/brown shows where dust has obscured the starlight). The right one shows the gas distribution. These gas images are a mock 3-color composite showing the cold neutral gas.

James Bullock of UCI is a study co-author. He commented:

These highly accurate numerical simulations have shown us that it’s likely the Milky Way has been launching stars in circumgalactic space in outflows triggered by supernova explosions. It’s fascinating, because when multiple big stars die, the resulting energy can expel gas from the galaxy, which in turn cools, causing new stars to be born.

Astronomers have long assumed that galaxies are assembled over lengthy periods of time as smaller star groupings come in and are dismembered by the larger body, a process that ejects some stars into distant orbits. But the UCI team is proposing ‘supernova feedback’ as a different source for as many as 40% of these outer-halo stars. 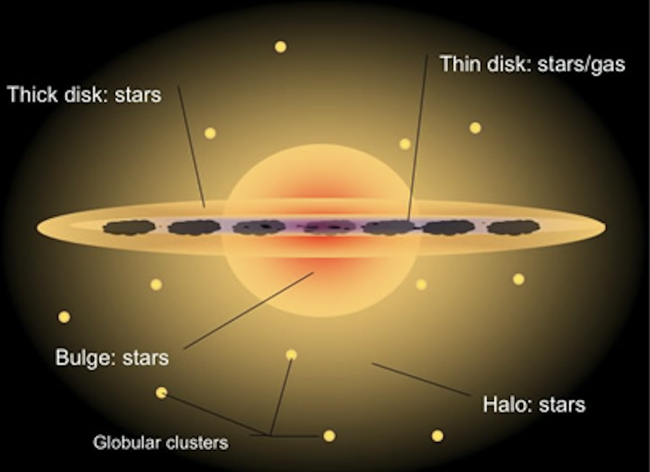 A typical spiral galaxy, like our Milky Way, has a faint, extended stellar halo. The new FIRE-2 study proposes that outflows from more central regions of the galaxy – triggered by supernova explosions – account for as many of 40% of the outer-halo stars. Image via COSMOS.

Bullock said he did not expect to see such an arrangement because stars are such “tight, incredibly dense balls” that, he said, are generally not subject to being moved relative to the background of space:

Instead, what we’re witnessing is gas being pushed around, and that gas subsequently cools and makes stars on its way out.

The researchers said that while their conclusions have been drawn from simulations of galaxies forming, growing and evolving to the present day, there is actually a fair amount of observational evidence that stars are forming in outflows from galactic centers to their halos. Yu said:

In plots that compare data from the European Space Agency’s Gaia mission – which provides a 3-D velocity chart of stars in the Milky Way – with other maps that show stellar density and metallicity, we can see structures similar to those produced by outflow stars in our simulations.

Bullock added that mature, heavier, metal-rich stars like our sun rotate around the center of the galaxy at a predictable speed and trajectory. But the low-metallicity stars, which have been subjected to fewer generations of fusion than our sun, can be seen rotating in the opposite direction.

He said that over the lifespan of a galaxy, the number of stars produced in supernova bubble outflows is small, around 2%. But things change when the galaxy is undergoing starburst events, that is, events where the galaxy begins undergoing furious rates of star formation. Yu added:

There are some current projects looking at galaxies that are considered to be very ‘starbursting’ right now. Some of the stars in these observations also look suspiciously like they’re getting ejected from the center.

Bottom line: Scientists used computer simulations from the FIRE-2 collaboration to learn that our Milky Way galaxy may sometimes launch newly forming stars into the space around itself – that is, into the halo of our galaxy – via outflows triggered by supernova explosions.

Source: Stars made in outflows may populate the stellar halo of the Milky Way

Via University of California, Irvine